Coach Bill Peters shuffled all four lines and while the outcome made him look like a genius, Peters would have switched lines again if he felt things weren’t “gelling.” Early in the contest, Brett Pesce couldn’t control a bouncing puck that led to a rare turnover just 25 seconds deep in the D-zone. The Kings were able to get off a shot that challenged Cam Ward early but Ward’s quick pad save with the left leg made things look easy. Not sure what set the tone, but the refs made it clear this was going to be, for the most part, a tightly-called game.

The Canes had an early powerplay that didn’t score but had great possession and passing. While both teams were playing four-on-four, the Kings turned over the puck in the Canes end. Pesce gathered the puck sending it to Jordan Staal in the neutral zone. Staal saw Jaccob Slavin rushing up the left side and made a cross ice pass at the blue line to Slavin’s skates. While in stride, Slavin kicked the puck to his stick then kept the jets on going to the goal with a defender coming from behind for a hook but quickly sent a nifty backhander high glove side for an early Cane lead.

Just over two minutes later, the Justin Faulk Show began. Victor Rask had the puck along the far boards shuffling it over to Justin Williams, who played for the Kings when they won the Stanley Cup. Willie passed to Faulk on the right point and with Teuvo Teravainen in the slot, sent a shot through traffic that went under Quick’s pads. Later in the period, Sebastian Aho put on a skating show as he picked up the puck behind Ward, gained speed going through the D-zone along the far boards, cut diagonally through the neutral zone entering the Kings end when he sent the puck around the back of Quick. Lee Stempniak out hustle his man to the puck and was held in the process drawing another King penalty. With assists from Teravainen and Seabass, Faulk scored his second of the night giving the Canes a nice 3-0 lead in the first. 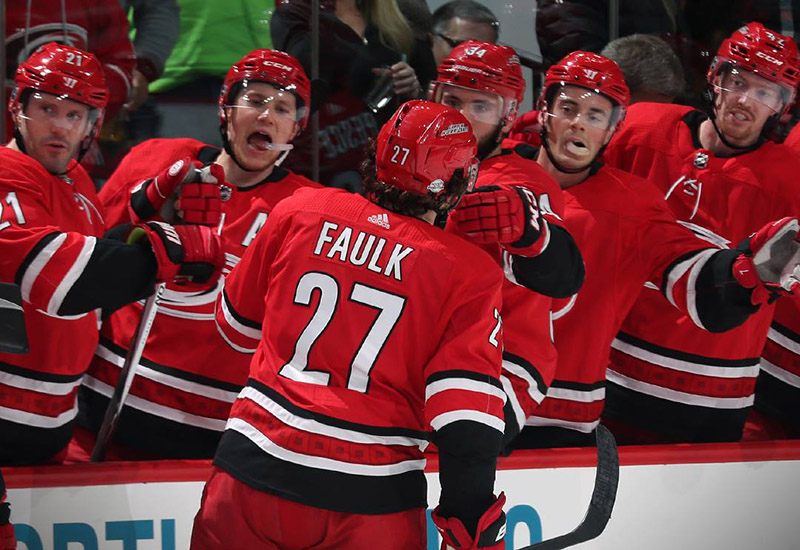 Faulk Completes Natural Hat Trick, Only 10th Defensman in NHL History to Do So

With the Canes on the back end of a powerplay that started in the first, the Teravainen to Aho to Faulk worked again putting the Canes up 4-0. Jeff Skinner added another powerplay goal at the 7:42 mark. Willie passed over to Rask at the blue line. Rask passed to Skinny at the top of the left circle, who faked a shot and with the defender flinching, moved towards the center sending a hard wrister top shelf near side for a 5-0 lead.

No other way to sugar coat it but the combination of the Kings digging down and the Canes letting up on the gas had the Caniacs wondering which team would finish the game. The Kings scored the next three goals, the first on a powerplay and the second on a real pretty tip in by Tyler Toffoli.

Torey Mitchell scored for the Kings at 6:43 of the third setting a very unsettling tone by the fans in attendance. Next goal would be crucial s the momentum was clearly in the Kings favor. After a steal by Phil Di Giuseppe inside the blue line tipping it to Skinny, Skinny raced to the corner of the goal and sent a magical backhander past Darcy Kuemper for a wild goal much to the delight of the Caniacs.

Late in the third, Seabass got a head man pass from Teravainen and raced passed his defender to slide the puck between the pads to seal the win on what was an extremely exciting game.  Canes are currently in the playoff picture but there’s that log jam of teams within a point or two and with all the metro divisional play over the next few weeks, strap in for a wild ride.

Next home game is Friday, February 16, 2018 against one of those team vying for the playoffs, the N. Y. Islanders. Be there! 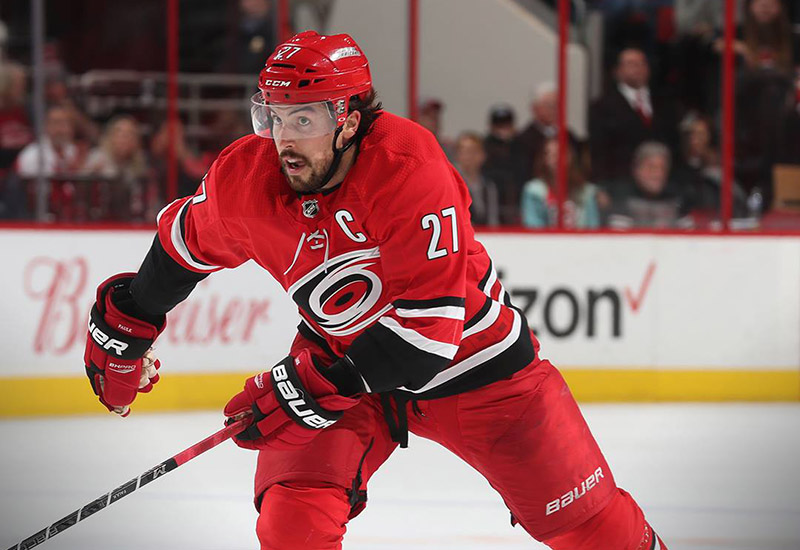