Cary, NC – The Carolina Hurricanes dominated the first game of the season against the NY Islanders but lost the game in overtime 2-1 in front of a sellout crowd Thursday, October 4, 2018 at the PNC Arena. Rod Brind’Amour missed the opportunity to start his coaching career with a win but had to be pleased with the effort the team put on the ice. Owner Tom Dundon promised changes and with 11 of the 20 players on the bench opening night new to the team and the man backs his word.

The individual introductions for each player was well received with Captain Justin Williams getting the loudest reception as the Caniacs were ready and anxious for Roddy Hockey. The forward line of Jordan Staal, Williams and rookie Warren Foegele started the game and had an excellent first shift, taking control of the puck even after losing the opening faceoff.

Sebastian Aho’s line was next on the ice and kept the pressure in the Islanders’ end. Within the first three minutes, the Canes had a quick four shots on goal. The Canes got an early powerplay that was a mixed bag of great passing, quick shot attempts but very slow at times, allowing the Islanders to set up their defense. Highlight of the man advantage was rookie Andrei Svechnikov sending a hard wrister off the near post. The shot, while not getting to the back of the net was an early indication why he was taken #2 overall in the the June draft. Not to go unmentioned, Justin Faulk also hit the crossbar through traffic on a hard shot.

Later in the period, Brett Pesce got a weak holding call putting the penalty kill team on the ice. Petr Mrazek was in goal for the Canes and made some good stops but also made it very interesting when he skated from the crease chasing the puck. The defense was there to bail him out so all was good. 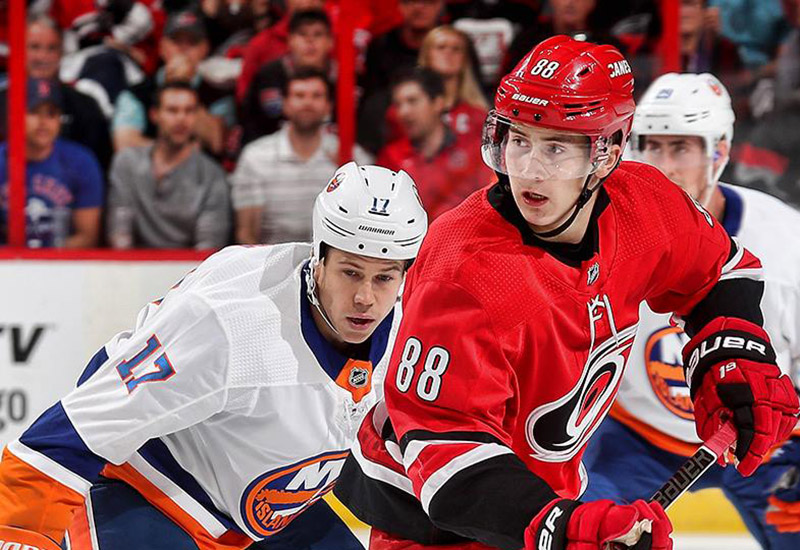 The Canes and Islanders had a shaky start to the second period and it may have been puck related as the puck was bouncing more than normal, both on the ice and off the boards. Usually that’s a sign the pucks were not cold enough, but simply put, both teams have to adjust.

When the Islanders caught the Canes on a bad line change having a two-on-one, Valtteri Filppula had all the time in the world to pick where he wanted to shoot. He picked five hole and put the Isles up 1-0. With Brett Pesce in the sin bin with a weak holding call, the Canes PK team was back on the ice. The Islanders were putting the pressure on and Mrazek was making conventional and unconventional saves. Late in the PK he wound up on the ice outside the crease with the puck dribbling behind him but Aho’s long stick was there to swipe it just before crossing the line.

The Canes had ample opportunities as with 11:31 still to go in the second period they had 26 shots on net. Give Islander goalie Thomas Greiss credit as he was always in the right place at the right time including the quick rebound shots. He also shut the Canes out once last season so he sure has the Canes number.

The Canes started the third with a renewed jump in their strides. They did an excellent job limiting the Isles to just four shots on goal while getting off 15 for the period. The Aho line has a great mix of young studs. Rookie Foegele is still playing the game as if he’s fighting for a job, while creating opportunities for the skilled Aho and Teuvo Teravainen. New comers Michael Ferland, Dougie Hamilton and Calvin de Haan all had excellent games and will become very familiar names in the near future.

With just over three minutes to go in the game, RBA pulled Mrazek for the extra skater. The Canes kept excellent possession of the puck with their passing looking like a powerplay. With 1:35 left, Hamilton sent a hard shot into traffic with the big bodies of Staal and Ferland in front. The puck hit Staal’s leg and went in the goal but the call was official after a lengthy video review for whatever reason. Greiss shoved Ferland as he was going to the crease and nothing else even came close to appearing wrong so not sure what the officials were looking at for so long.

With just 3.2 seconds left, Ferland did have his arm around last year’s Rookie of the Year, Mathew Barzal, but Barzal went down so easy the folks in the first 15 rows could have felt the splash on what appeared to be a matching dive. The Isles scored in OT while still on the powerplay to disappoint the sellout crowd. There were plenty of good takeaways with the game: the team is faster than last year, the team is much faster to the puck, the four rookies may make rookie mistakes, none tonight fortunately, but are going to be very exciting to watch and will be major contributors and the pushback by the Canes is a whole lot different than past teams. Good chance that’s part of the player mix as well as input from defensive player development coach, Tim Gleason.

Should be a very fun and exciting season. Next game is against the NY Rangers on Sunday, October 7, 2018 at 5 PM. Be there!