Cary, NC – With less than two weeks until Election Day, candidates for the North Carolina House and Senate seats in Cary met with members of the Cary Chamber of Commerce at a candidate forum, taking questions and talking about education, Wake County’s growth and healthcare costs.

Candidates running for seven state House and Senate seats met at Prestonwood Country Club as part of the Cary Chamber of Commerce’s regular morning meetings on Wednesday, October 24, 2018. Instead of candidates giving speeches to the whole room, they moved from table to table, addressing each group of attendees to speak and answer questions directly before moving to the next table.

Candidates running for the same seat went to tables together. Representative Nelson Dollar, the Republican candidate and incumbent and his Democratic opponent, Julie von Haefen spoke at our table. Education funding was the only subject the two talked about in the allotted time, as von Haefen started by saying she was running for the seat because she does not believe the General Assembly is funding education sufficiently and criticized the class size cap passed by the General Assembly.

Dollar, who is the senior chair of the Appropriations Committee, said the largest part of the budget is education funding and said it has increased, as has funding for pre-K and teacher pay, which he said is being funded by growth thanks to low taxes and more private capital investment in North Carolina.

Dollar also pointed to his fiscal responsibility in creating a large “rainy day” fund which was used for Hurricane Florence relief. 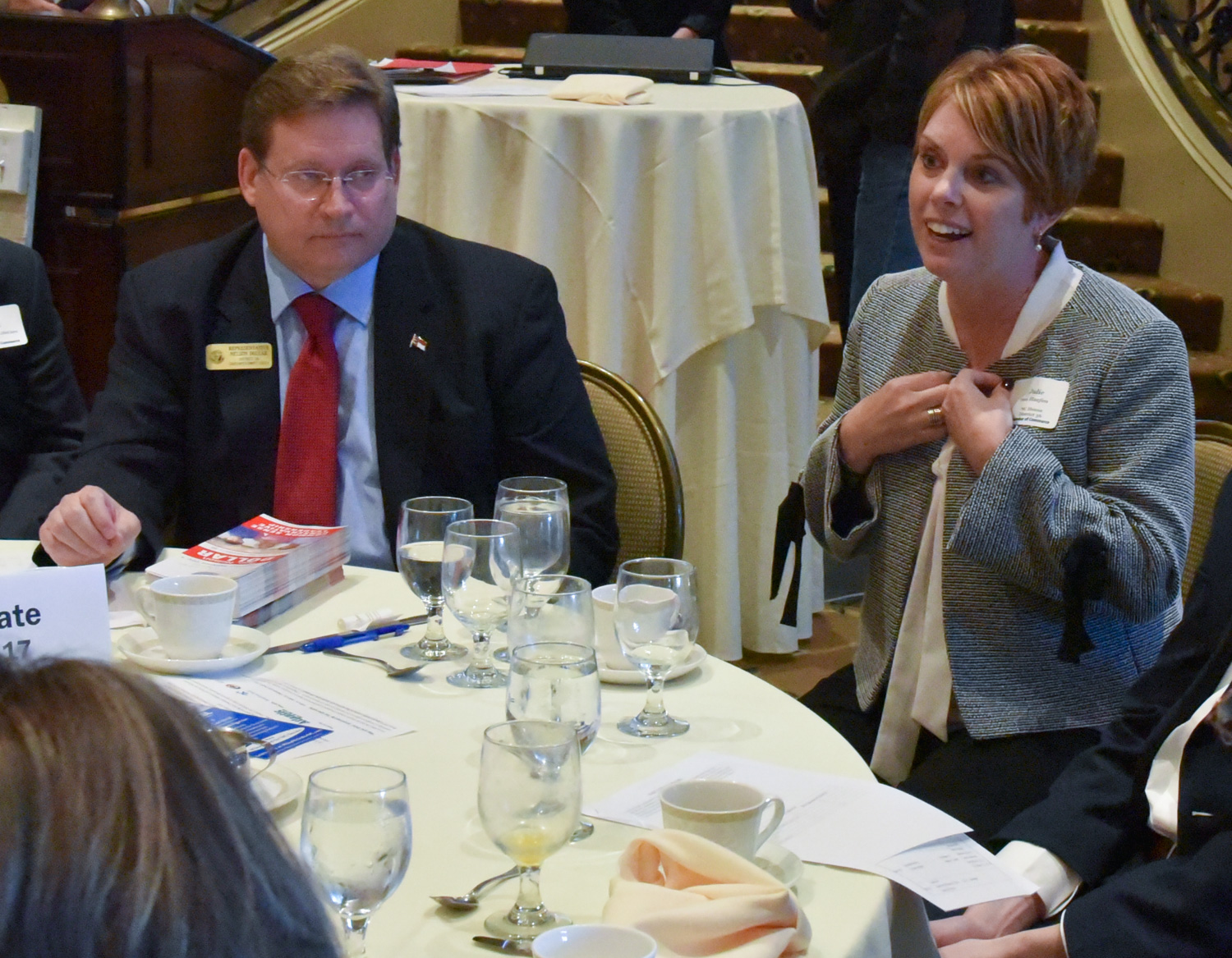 Von Haefen said funding for more teacher pay only came after pressure from teachers and parents and called the aftermath of the class size cap “chaos” that nearly resulted in multiple teachers losing their jobs.

“It was an unfunded mandate,” von Haefen said. “Then the General Assembly passed a fix but it was just a band-aid on a leaking wound.”

Von Haefen also said the way the state has prioritized education funding has taken money away from the high schools and they are now losing electives. 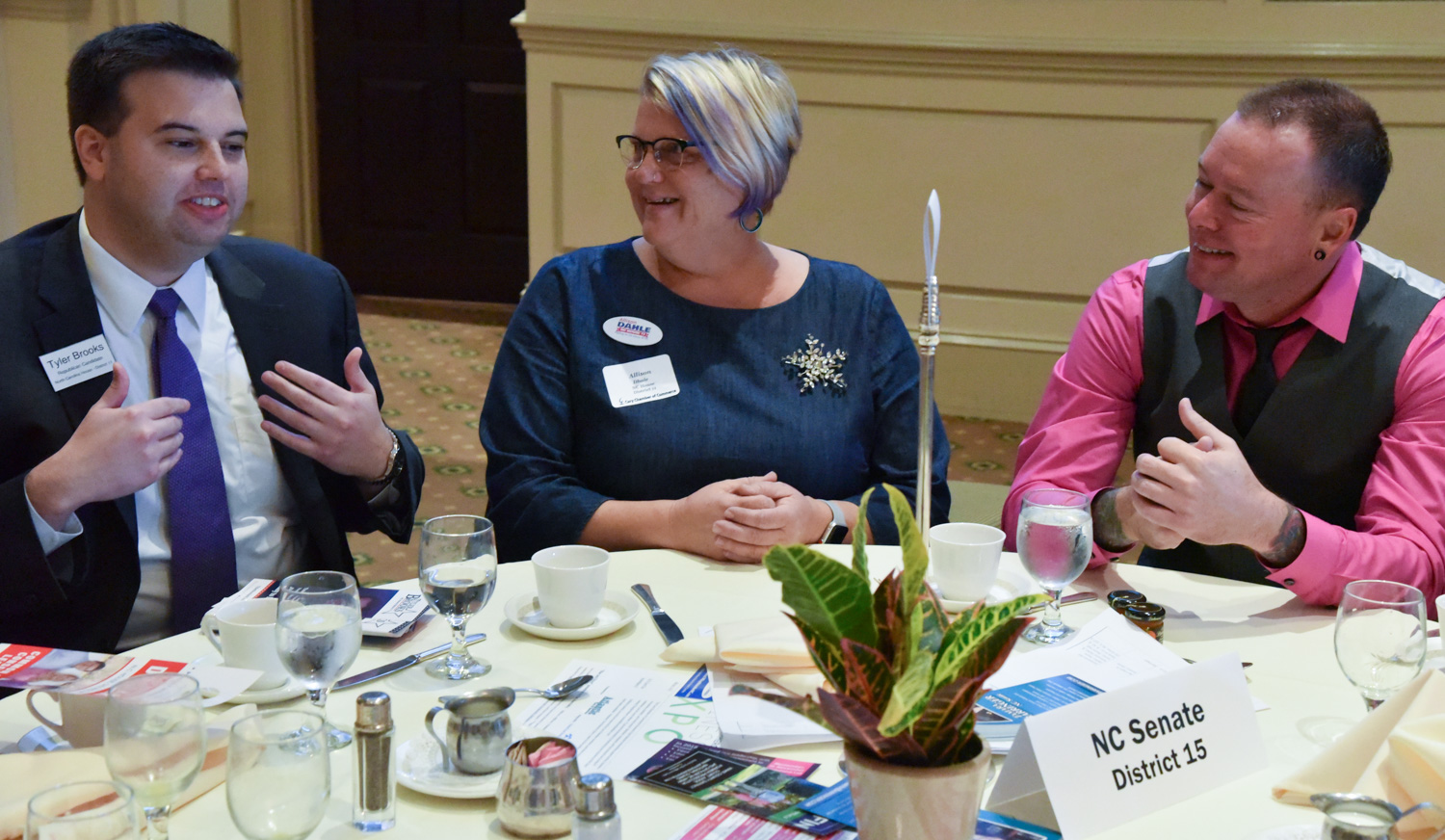 There is no incumbent running in House District 11 since Democratic nominee Allison Dahle defeated incumbent Duane Hall in the primary so all three candidates would be new to the General Assembly. Dahle said her primary interest is equality in education and said she does not want to see an increase in school vouchers or charter schools.

“I want to see public education back to where it was when I went through the Raleigh-Cary school system,” Dahle said.

Republican nominee Tyler Brooks said his focus is on keeping North Carolina on the same trajectory it is on now, which he said is toward economic growth thanks to the General Assembly’s actions. Brooks also said he is interested in fiscal responsibility to help with funding.

“It ensures we can continue to fund transportation, education and everything we know is important,” Brooks said.

Brooks also said he thinks charter schools are beneficial and wants to defer to parents in choosing education for their children. School choice was also a key feature of Libertarian candidate Travis Groo’s talk with the assembled audience. He said he supports more charters schools and school vouchers and said he wants education to be part of the competitive free market.

“If the public education system isn’t working for your family, you should have the freedom to send your child somewhere else without having to double pay,” Groo said. 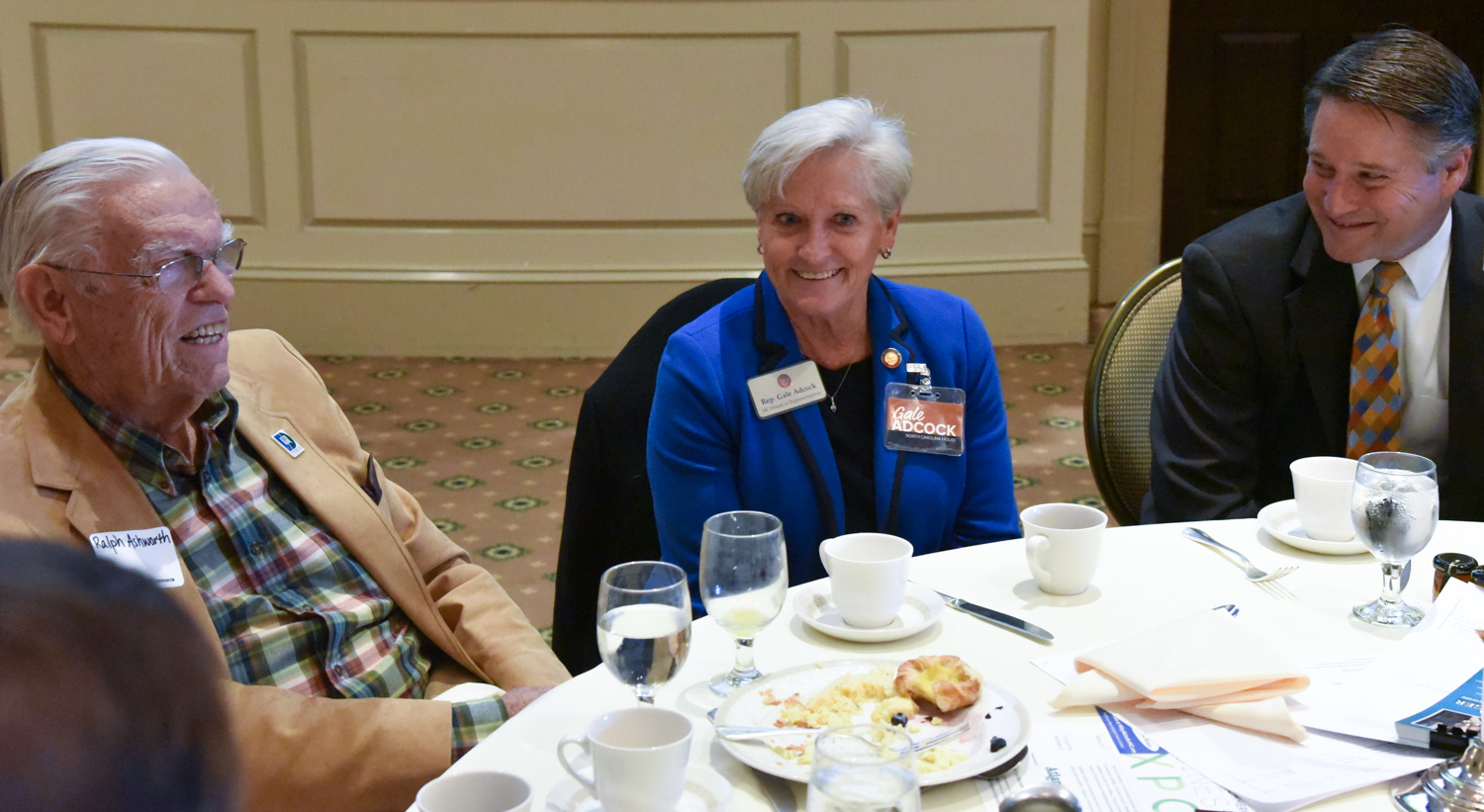 Democratic candidate and incumbent Representative Gale Adcock spoke briefly about her more than a decade in elected office, including seven years on the Cary Town Council, before fielding questions about rapid growth in Wake County. People at the table started by specifically asking about the rate of population growth outpacing schools being built. Adcock said the General Assembly does not have much power here and it is mainly up to the county and town governments, but said school overcrowding has been a long standing problem.

“Panther Creek was overcrowded the day it opened,” Adcock said.

But related to growth, Adcock said North Carolina was getting better about funding road improvements to help with transportation and said in the Cary citizen survey (not to be confused with a CaryCitizen survey), traffic has consistently been the number one concern. Adcock said there is a new formula in place to prioritize road construction based on need rather than political clout and credited the work of CAMPO, led by Cary Mayor Harold Weinbrecht.

But Adcock also said part of the road funding comes through the gasoline tax and she said she voted against lowering that tax.

“I looked at the revenue we were getting from the gas tax and saw we would be in terrible shape if it dropped,” Adcock said. 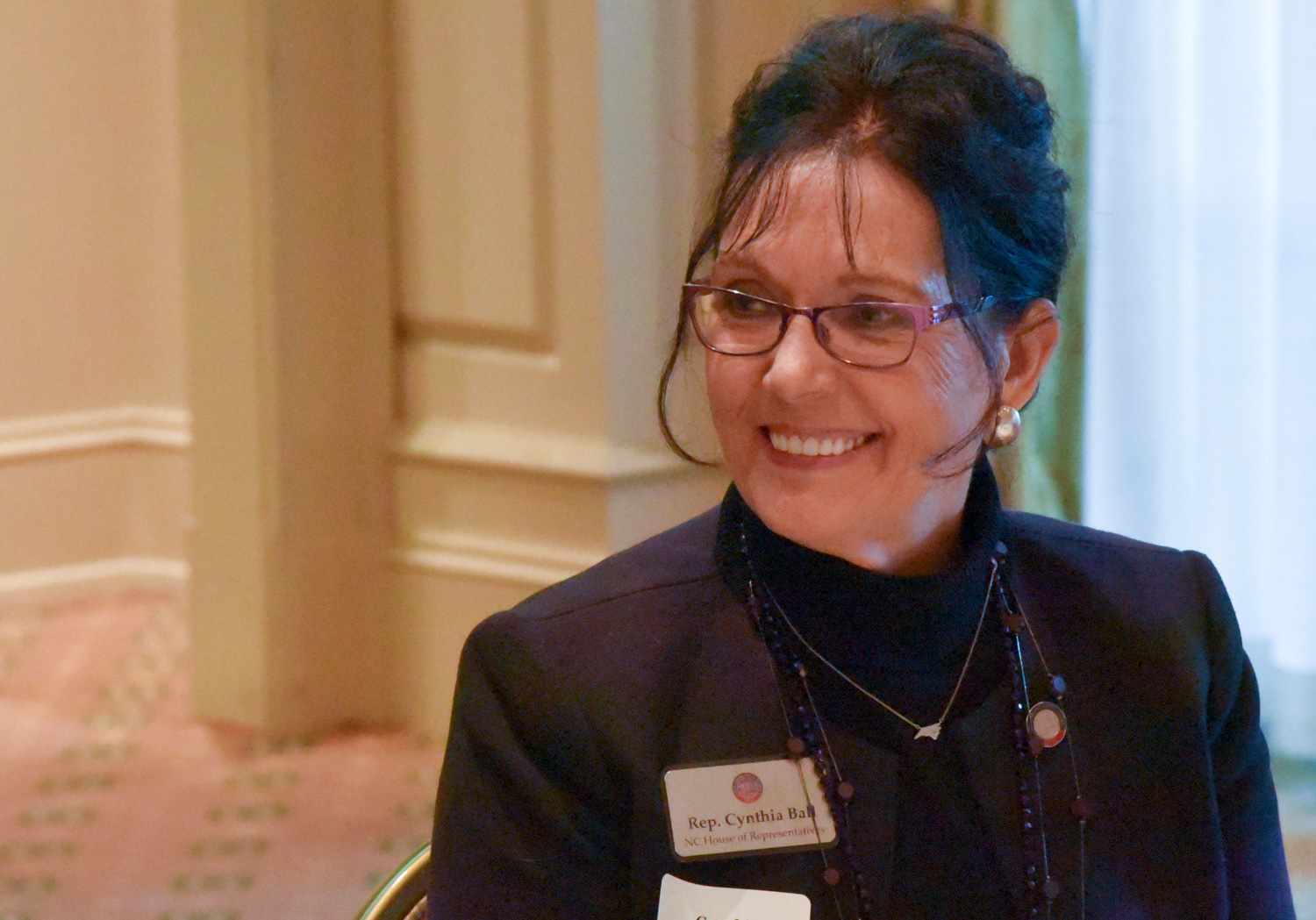 Republican nominee for this seat David Robertson was in attendance at the event but arrived after Democratic incumbent Representative Cynthia Ball addressed our table. Ball talked on several different issues, ranging from education to healthcare to affordable housing. Ball said healthcare costs need to be controlled and said she wants to work with experts from insurance companies, pharmaceutical companies and hospitals to find answers.

On education, Ball said she supports a universal pre-K program and also wants to control the costs of colleges and universities, which she said have become unaffordable. Ball said education is important to make sure people in North Carolina have the “jobs of the future,” which she said are needed even now.

“We have companies coming in and people don’t have the skills they need to hire,” Ball said.

With redistricting in North Carolina, Senate District 16 is newly drawn and currently has no incumbent, so all three candidates would be new to the state Senate.

With three candidates and limited time to speak, they talked briefly about their interests in state government. Libertarian nominee Brian Irving said he wants to expand people’s choices, including school choice, employment choice and healthcare choice. On the subject of housing and growth, Irving said he wants developers to have fewer regulations but also said there needs to be some rules about when they can build.

“They need to make sure the infrastructure is there when they develop,” Irving said. 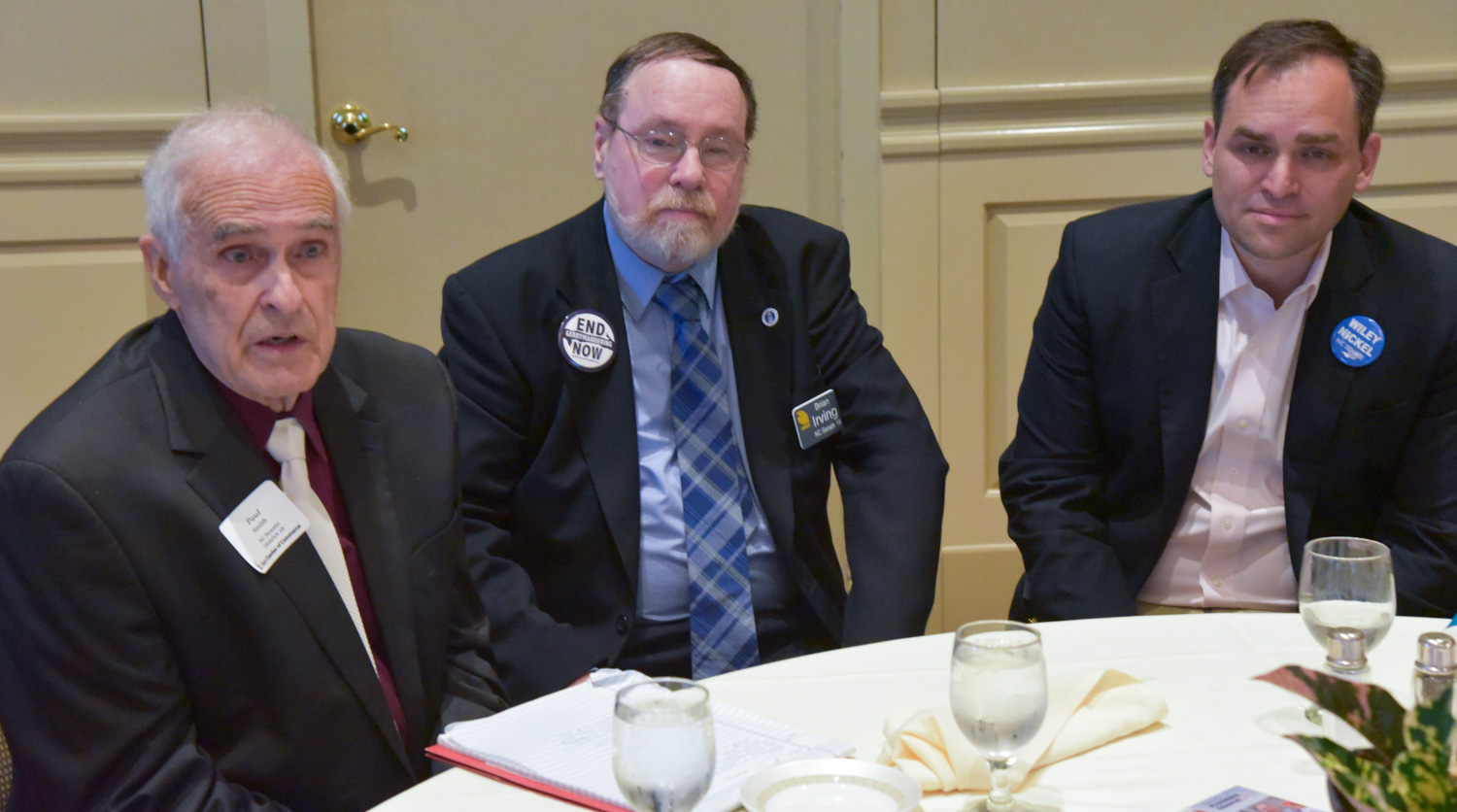 Republican nominee Paul Smith also said he supports education choice through vouchers and charter schools as well and said he wants to focus on funding for veterans programs but spoke primarily about his support for President Donald Trump. Smith read through a list of policies from the Trump administration and current Congress that he is in favor of, ranging from domestic policies such as GDP growth and low unemployment to foreign policy such as ending the Iran nuclear deal and diplomacy with North Korea.

Democratic nominee Wiley Nickel said he got into the race to push for funding and investment in public education and said teachers are leaving the state due to low pay. On the subject of affordable housing, he said he supports the plans that Wake County Commissioner Jessica Holmes has.

“We need to give towns more flexibility when it comes to creating affordable housing,” Nickel said. 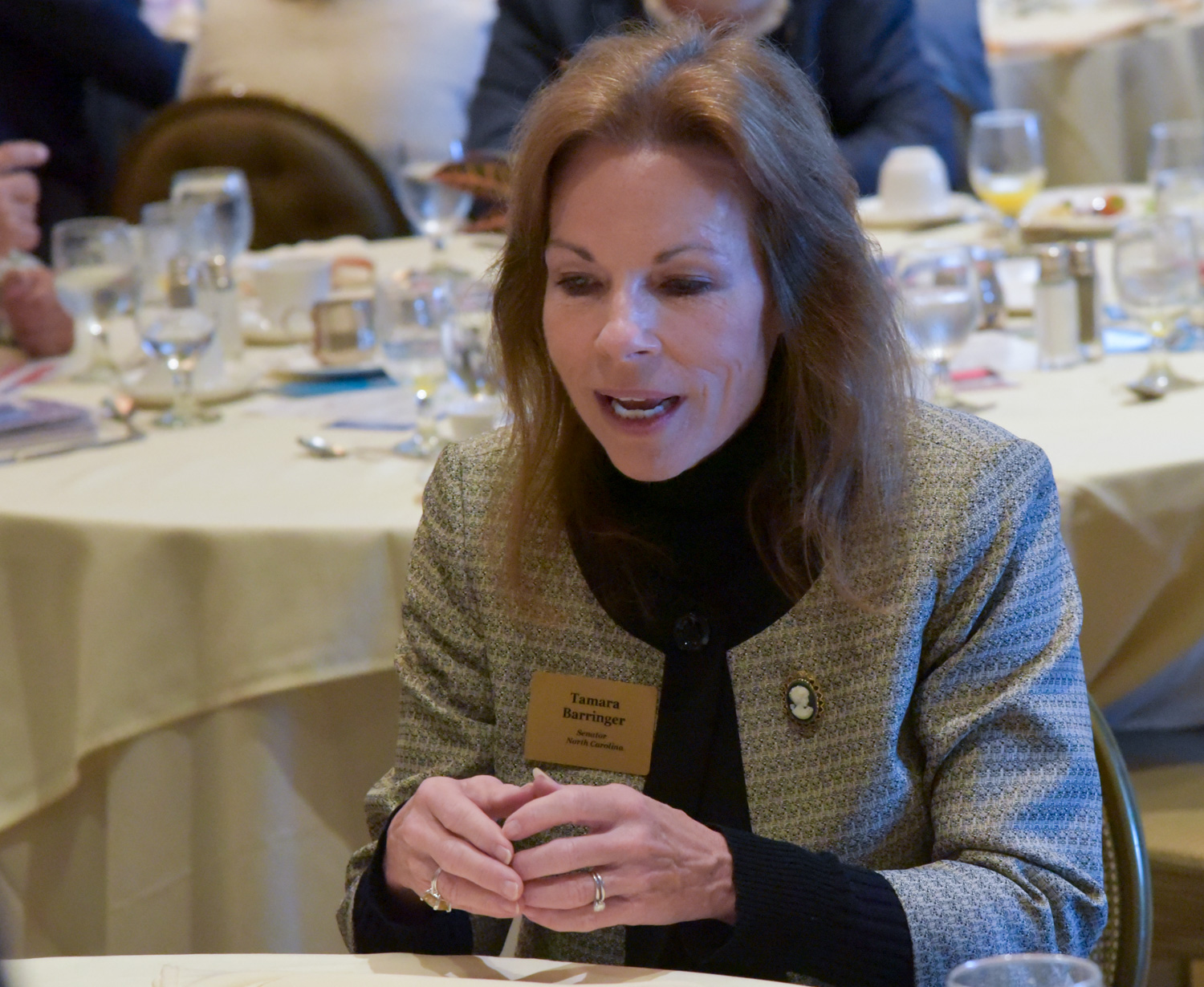 Republican candidate and incumbent Senator Tamara Barringer talked about her credentials and effectiveness as a legislator, sharing a printed list of 31 bills she drafted or sponsored, most of which did not have anyone vote against them.

“I’m a consensus builder and I’m proud of that,” Barringer said.

“I want to vote yes, but yes on our terms,” Barringer said.

Barringer also talked about her support for local business and said she wants more of a link between business and education in the state. 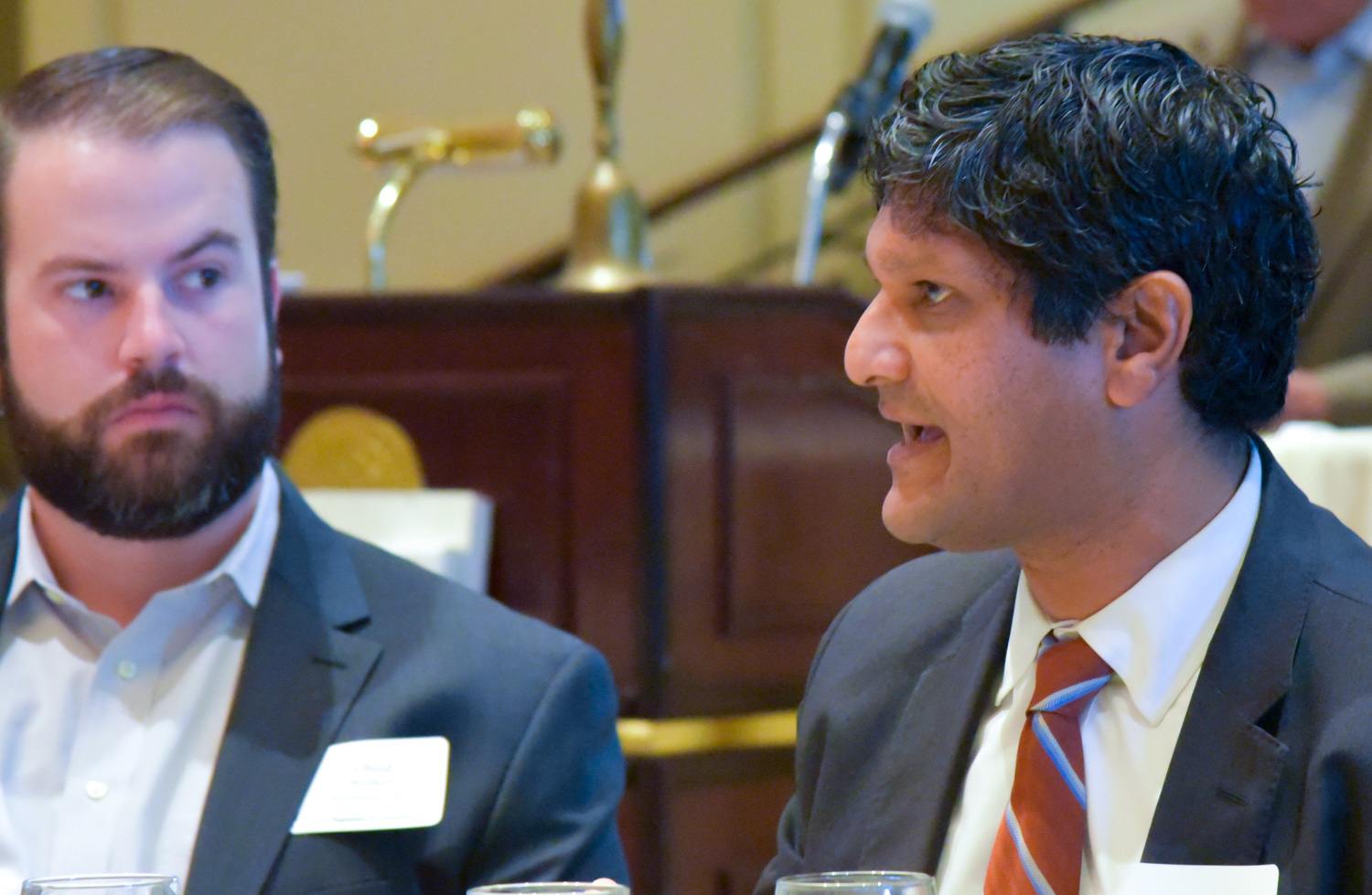 Democratic candidate and incumbent Senator Jay Chaudhuri spoke on education for most of his time with the group, talking at first about his opposition to the class size cap, which he said was an unfunded mandate.

“I’m in support smaller class sizes but they did not have the funding to pull it off,” Chaudhuri said.

He also criticized the Senate for not passing teacher pay increases when the House did. Chaudhuri said a goal of his is to have more computer science education in the state because those are high-paying jobs that are in demand currently but are not being filled. Chaudhuri also said he helped recruit an information technology company to Wake County and said it was because of education.

“They decided to come to Wake County because of Wake Tech,” Chaudhuri said. “Any way we can boost community colleges is important to recruit jobs here.”

On the divide between North Carolina’s rural and urban/suburban areas, Chaudhuri said people in rural areas feel left behind and he said more prosperous counties such as Wake and Mecklenburg should leverage their assests to find out what they can do for rural parts of the state. Chaudhuri also said he supports rural broadband initiatives and criticized the General Assembly for opposing them.

You can find a list of candidate questionnaires for the 2018 election on CaryCitizen.