Cary, NC – The top line in the NHL did what they do best and tallied for all three Bruins’ goals while the Canes were only able to muster two at the PNC Arena the night before Halloween.

The Canes’ Scott Darling started his first game of the year after a preseason hamstring issue kept him sidelined for the first month. Darling started out very strong making several class A saves in the first and second periods. Sebastian Aho tied Wayne Gretzky’s NHL record of starting the season with a point in the first 12 games.

For the second game in a row, Jordan Staal got called for an early penalty taking one of the best penalty killers in the NHL off the ice and with the dismal record the Canes’ PK have this early in the season, this could have been a disastrous start. The Canes’ PK did an outstanding job ragging the puck in all three zones with Brock McGinn and Warren Foegele playing great as did all defensemen, limiting the Bruins to just one shot on net.

With the Canes back on offense, Calvin deHaan made an outstanding pass to Michael Ferland that was a perfect tip in play but Bruin goalie Jaroslav Halak made an excellent blocker save. A few minutes later, rookie Andrei Svechnikov used his muscle and size for a nice body check behind the goal and was still able to get a pass off to Trevor van Riemsdyk for a shot from the point. In the middle of the period, Jeremy Lauzon had a breakaway going in on Darling with Darling coming up with a very impressive save that may have been a result of him losing weight and getting in shape before the season.

With the Canes on their first powerplay late in the period, after winning the faceoff, Aho had the puck on the left point. He had time and space, took a stride, picked a corner and let it fly into traffic with both Ferland and Valentin Zykov in the dirty area. The puck was loose with all normal the pushing and shoving going on but Ferland kept his eye on the prize and shoved it in for a goal with just eight seconds gone on the man advantage.

Just 30 seconds later, the Canes third line was on the ice dumping the puck low. Svechnikov raced towards the end boards but was tripped right at the net. At first, the ref just looked at him, but Svechnikov raised his arm as refs do when a penalty is being called and after the Caniacs chimed in, made the right call. 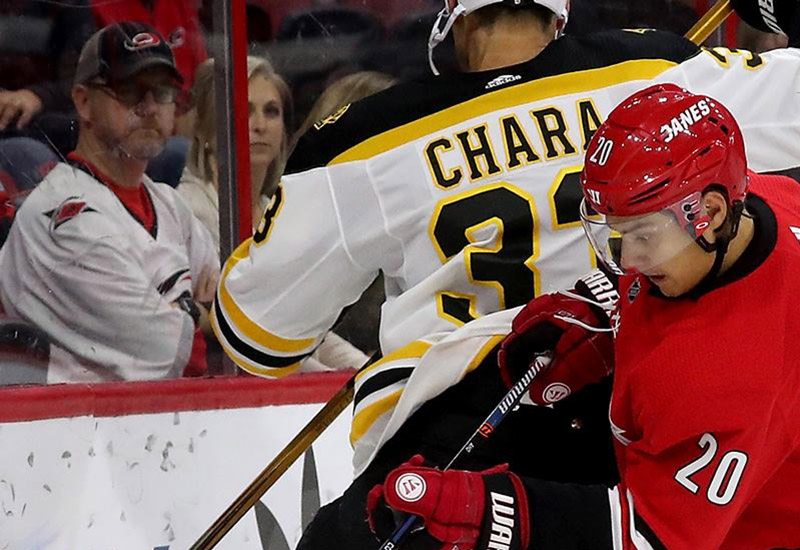 The Canes started the second with the back end of the man advantage from the first period penalty but were not able to get anything set up this powerplay. Sadly, the best shot was by the Bruins which again, forced Darling to make a grade A save. Justin Williams got called for a high stick just over the 10 minute mark which Willie took exception to as his argument may have been offsetting penalties not just one against the Canes. Dave Pastrnak was to Darling’s right side and did a wicked shot short side that git in as Darling didn’t have the post covered.

With the Canes pressuring in the O-zone, John Moore flipped the puck over the glass. Jordan Staal made a saucer pass to Dougie Hamilton on the left point sending a no nonsense shot to put the Canes in the lead. Shortly thereafter Lucas Wallmark got called for tripping putting the Bruins on the man advantage.

Late on the PK, Foegele was out of gas but made an attempt for a breakaway. He didn’t get a shot off and also did not dump the puck low which may have come as a surprise to the Canes as they were on a shift change and were unprepared for a home run pass to NHL most disliked player, Brad Marchand at the Canes blue line. Marchand took a stride then sent a nice shot far side that Darling knew he should have had that knotted the game.

Canes Run Out Of Gas

The Canes seemed to be slower in the third period, which is unlike the this team’s typical game. The forechecking was not as prominent and the crease in front of the Bruins’ goal seemed to be like no man’s land as Halak rarely had a Cane player in front.

At the 5:23 mark, Marchand scored again on another assist from Patrice Bergeron. Marchand went into the Canes zone with speed with Willie a step behind trying to make life difficult on the guy that licked opposing players in the playoffs. Give Marchand credit as he held off Willie then circled the net stuffing in a wrap around as Darling committed to the near side leaving an open net.

The Canes once again shortened the bench playing just three lines for most of the rest of the game. Shots were shots for the sake of getting some rubber thrown to the net but none were serious scoring chances. While it was good to see the Canes get two powerplay goals, they were ineffective 5-on-5 and once again the PK faltered. Darling’s first game back was the same as how the overall team played, strong at the start but weaker as the game went on. He looked quicker than last year by a wide margin and anticipated many shots, a vast improvement over last year. Not hugging the post and letting in that second goal were reminders that there still are areas to be worked on.

The Canes game plan to shut down the Bruins top line didn’t play out as planned and that was the game in a nutshell. The Bruins are a strong team but with a little more Roddy influence with the Canes forwards, the Canes will be as strong.

Canes take a western trip this week with the next home game Saturday, November 10, 2018 against the Detroit Red Wings. Be there! Next Group Deal is for the Monday, November 12 and Tuesday, December 11, 2018 games. If interested, please contact me: bfennel11@yahoo.com.