Cary, NC – The Carolina Hurricanes had a three-goal lead slip away from them at the start of the weekend against the Washington Capitals, before rallying back and beating the Arizona Coyotes in a 3-0 shutout to end the weekend.

There’s no denying that Alex Ovechkin is one of the most prolific scorers over the past decade as he recorded a hat trick leading the Capitals to a 6-5 Shootout win over the Canes. This was O’s 22nd hat trick of his career with his 21st coming just a few days ago.

The Canes had this game but once again squandered a solid three-goal lead as the better team stepped up and took control eventually winning after six rounds in the shootout. 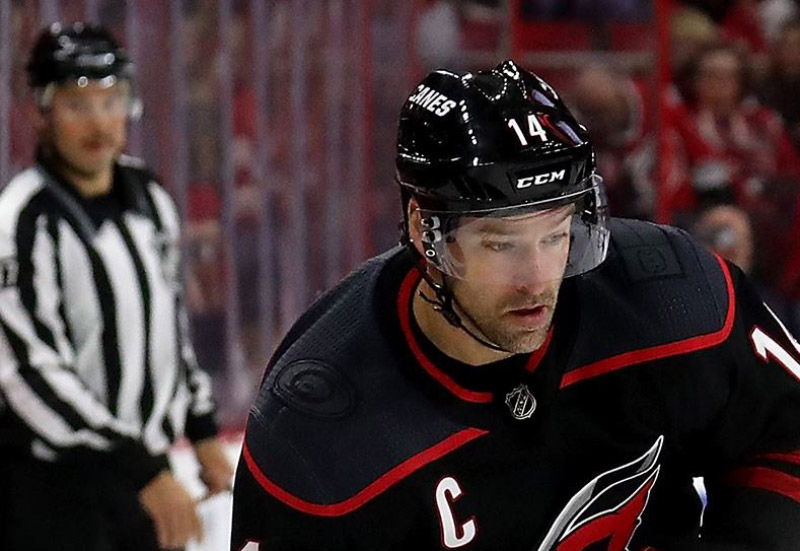 The Canes have been having sluggish starts lately, none would be described as “not starting on time,” just slower and, as coaches like to say, not engaged. Coach Rod Brind’Amour promised this game would be different and it was.

After winning the opening faceoff, the Canes methodically brought the puck into the Caps’ zone. Calvin de Haan got the puck low to Sebastian Aho who attempted to pass over to Jordan Martinook behind the net but the pass was tipped up. Marty caught the high fly in stride, dropped the puck to the ice and made a power move around the net sending a hard backhander past Branden Holtby for the early lead with just 47 gone. The Canes won the ensuing faceoff and again put pressure on Holtby but he made a save off Justin Williams.

After play stopped, Willie was making his way through the crease when future hall of famer Nicklas Backstrom came up to Willie’s back, said a few things that got a smile from Willie, then sent a love tap cross check as a sign of respect for the former teammate.

Within the next minute, the Ovechkin show started. With the puck in the Canes’ end and all the play on the near boards with only one player, Ovie, camped out in his office, the right face-off circle. It appeared everyone in the arena, except one, knew the puck would be heading to Ovie, which it eventually did and he fired his patented bomb that went in short side to tie the game. The Canes penalty kill unit has been outstanding lately and needed to be as the Caps have so much firepower.

With deHaan in the box for high sticking, Teuvo Teravainen intercepted a center zone pass and tried to make a breakaway, lost an edge but was able to slide the puck over to Sebastian Aho who was able to go five hole for a short handed goal, putting the Canes back up by one. Earlier in the period, Madison Bowey took down Warren Foegele which was as plain as day but Foegele got called for embellishment offsetting the powerplay. I watched that play several times and when a player falls on his back, nearly doing a header, I can’t see how that’s embellishing a fall.

The second period was full of highlights and lowlights. The Canes were on an early powerplay and were keeping good possession in the Caps zone but were unable to get off any shots. With the puck high on the umbrella formation, Justin Faulk passed to Seabass on the near side. Andrei Svechnikov was using his strength to stay in the dirty area that Seabass recognized then sent a slap shot through the maze that hit the back of the net for a 3-1 lead.

The Canes won the faceoff and had the puck in the Caps end. Svech was jockeying for position when Tom Wilson tried to knock him into next week and got called for the penalty. For the first time in whenever, the Canes scored on back to back powerplays. With the first unit in the ice, Seabass passed over to Svech who passed up to Teravainen then made an attempt to get in the dirty area but just as Teravainen blasted a shot Svech, Aho and two Caps all fell into the crease as the puck

went by Holtby for what seemed like a solid 4-1 lead. Then the Caps woke up. In a span of just six minutes, the Caps scored three goals and not to credit their due, but some goals were just too easy. The Canes forechecking and body hits greatly diminished and Scott Darling, in his first game since being brought back up from Charlotte just wasn’t on his A game. Ovie scored his second goal in that span but the Canes objected as there appeared to be a clear penalty by the Caps that allowed Ovie to be open but the refs saw it differently than the Canes and replay.

Martinook had a solid game all around. He was fast every shift, hitting and forechecking very well and got in one good slash against a player opposing fans love to hate, Tom Wilson. Problem is, he got caught for the slash giving the Caps the powerplay. It didn’t take long for Ovie to finish off his hat trick but give Brett Pesce credit for kneeling down in an attempt to block a shot from one of the hardest shots in the NHL. The Canes could have turtled but dug deep and took every opportunity to tie the game. Holtby is one of the best goalies in the league and despite the the limited shots by the Canes, was sharp all game.

With the Canes on the last few seconds of a not so good looking powerplay, Jaccob Slavin, who had an outstanding game, dumped the puck in from the neutral zone. Holtby went behind the net to snag the puck and decide where to send it. Willie was in full stride forcing Holtby to clear the puck and that rush resulted in Holtby hitting the back corner of the net giving Willie an early Christmas present as he settled the puck and put in a backhander to tie the game at five. The Canes had a 1:36 powerplay in the overtime but were only able to get one shot off which wasn’t a real scoring threat. The shootout went six rounds with Dougie Hamilton the only Cane to score while the Caps got two past Darling for the win.

After a very disappointing game against Washington, the Canes needed to rebound not only to strengthen what little hope they have for the playoffs but also to keep the Caniacs as Caniacs. The Canes got a 3-0 shutout, in what has seemed like forever since the Canes blanked another team, back stopped by Petr Mrazek in a very important game on a rare Sunday afternoon game in front of an excellent crowd.

After a scoreless first period, the Canes got two goals in the second within just minutes and played a solid defensive game in all three periods.

Andrei Svechnikov had a puck on edge and at the 37 second mark of the first period sending the puck over Rod Brind’Amour’s head into section 105 giving the Coyotes the first powerplay of the game. The Canes’ PK unit has been very good lately and once again killed off the penalty while just allowing one weak shot.

Shortly after the penalty was over the Coyotes had a partial 2-on-1 breakaway that ended up with a shot that looked like a sure goal but Mrazek made a great pad save. On the Canes first powerplay, Svech was down low behind the goal line and threaded several nice passes up Broadway but not were able to be converted to a goal.

The defense was noticeably active this game joining the rush more and just playing solid defense overall. The defensive duo of Jaccob Slavin and Brett Pesce were beasts, solid on defense, stonewalling every attack attempted by the Coyote. They made the right decisions on when to join the rush as did all three defensive pairings. Coyotes rookie goalie, Adin Hill, made an outstanding save off what looked like sure goals from both Sebastian Aho and Jordan Martinook. The Canes had a powerplay midway in the first and didn’t score, everything looked good. Puck possession was solid, feeds from Svech and Seabass were plentiful so while the important result wasn’t there, the coaches had to like what they saw. 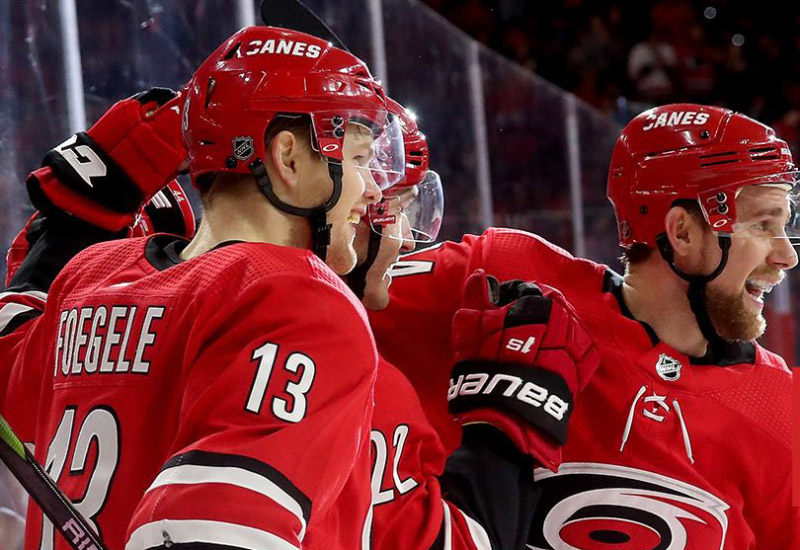 Foegele, Svechnikov Tallied in the Second

Early in the second, Pesce took exception to a slash on Mrazek by Lawson Clouse so both went off to the sin bin. During that 4-on-4, Mrazek made two outstanding saves that appeared to have goal written all over both. The second save was after the defense had a turnover with Mrazek let out to dry but came up with the huge save by being in the right position and cat-like reflexes.

Just under midway in the period during a shift change, Pesce passed over to Calvin deHaan who came flying up the left side. Shortly after crossing over the blue line, deHaan let go a bomb that Hill made a pad save sending the puck to his left. Warren Foegele was in the right place and the right time with the rebound going right on his stick then swiping it in for his first goal in 27 games.

Exactly four minutes later, Justin Williams had the puck at the Canes blue line with Justin Faulk gaining speed on his left. Willie dropped the pass to Faulker who went into the Coyotes zone with just one defender and Svech joining on the left. Faulker made a sweet pass to Svech who took a stride then calmly selected the upper corner blocker side to put the Canes up 2-0.

Seabass was having a great night and you could sense he wanted to keep his scoring streak going. He almost had a goal very early in the period when he carried the puck along the blue line, then turned on his jets to beat a defender on the left side going in on Hill all alone. Hill stopped Aho cold with great anticipation on a shot trying to go 5-hole that left the impression Hill watched some tapes before the game.

Barely three minutes later, almost the exact same play occurred: Seabass had the puck on the left, beat his defender then again went in on Hill untouched. This time, Seabass mixed it up a bit and shot much sooner that his normal rush and still went through the wickets to give the Canes a three-goal lead. The Coyotes lead the league by a wide margin with short handed goals and even with the Canes on a powerplay, being behind in the game and their excellent PK approach, the Coyotes are a threat all 60 minutes.

The Canes were aggressive late in the game, certainly with a shutout in mind, and that aggressiveness drew a couple of late penalties.  Unless the Canes scored, they were assured closing the game on a powerplay. With the aggressive PK team the Coyotes have, Dougie Hamilton had to slash Crouse as he was going in on Mrazek with just 22 seconds left. It was a was penalty to take with Mrazek sure to but the big guy a steak dinner after the game for the Canes first shutout in 11 months. The game celebration was another new twist and worth the wait to see both the team and Caniacs enjoy a home win again.