Cary, NC – After gasoline prices spiked at the end of Summer, Cary prices are dropping in the Winter, with the lowest December prices in two years. 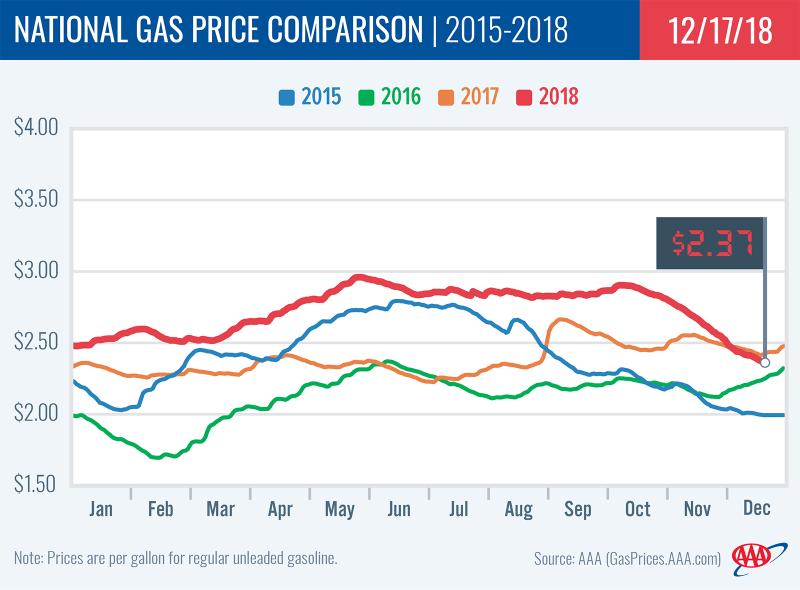 The current average gas price in the Cary-Raleigh area is $2.281 per gallon, which is the lowest price since this same time in December 2016. By comparison, the average price in this area a month ago was $2.546 per gallon.

Prices have continued to drop since the start of the Winter, despite concerns the Organisation of the Petroleum Exporting Countries (OPEC) would limit production to rise prices back up. Winter prices are often lower because of reduced driving and demand, as well as the cheaper chemical blend to produce gasoline in the Winter as opposed to the Summer when evaporation is a concern.

But while the Winter typically results in lower demand with fewer drives, resulting in lower prices, this season’s especially low prices may actually cause demand to spike. AAA Carolinas estimates a record 4.25 million North Carolinians will drive out of town for the holidays this season.

“Motorists are getting a gift this holiday in the form of relief at the pump,” said Tiffany Wright, AAA Carolinas spokesperson. “This may be a factor in the boost of travelers choosing to drive this year.”

While the Cary-Raleigh area has historically significant low gas prices, it is actually one of the more expensive metropolitan areas in the state. The state average gasoline price is $2.247 per gallon. The average around Charlotte is $2.139 per gallon and the average around Greensboro is $2.215 per gallon. Chapel Hill and Durham are both significantly higher, as they typically are, at an average of $2.408 per gallon.

Why Differences Between Stations?

Driving around Cary, you may notice a variety of stations with prices higher than the average – significantly higher in some cases. What’s more, gas stations within a mile of one another can have differences of five to ten cents. Why is that?

Another factor is that Cary is an affluent town and for the most part, residents can afford higher prices and not think about going out of the way to go to a cheaper station. You will find these pricer stations closer to affluent neighborhoods, subdivisions and employment centers in Cary, while stations in less well-off communities or on the outskirts of Cary may have to lower prices to keep drivers in those areas coming.

The other factor to consider is that, for the most part, a gas station is not making its money off of the gasoline itself.

“At times, you can see prices vary from anywhere from 20-50 cents in a five block radius. That’s because at end of the day, the gas prices are trying to get you inside for the real fuel: what’s in the freezer and on the shelves,” Wright said. “They’ll take a couple of cents hit at the pump to get you inside.”

You can map out the gas prices in Cary with apps such as GasBuddy or by the list of gas prices on local broadcast news websites. You can also cut your gasoline bill by taking the bus or riding your bike and walking to your destinations through the network of greenways around town.

Money Matters: I’m Changing Jobs. What Should I Do With the Money in My...
Scroll to top
%d bloggers like this: