Cary, NC – Citizens from Cary and beyond are familiar with the Downtown Cary Park and its fountain but that is only one segment of the overall park, with the master plan for the remaining six acres up for a vote this week.

Phase II of the Downtown Cary Park was unveiled online to the public this week and in a public meeting March 14 between 4- 6 Pm at Town Hall. This plan is based on input from Cary residents, town staff and consultants. Town Council will vote on the master plan at their regularly scheduled council meeting Thursday, March 14, 2019. Residents will vote on a bond referendum on Tuesday, October 8, 2019 for its funding. 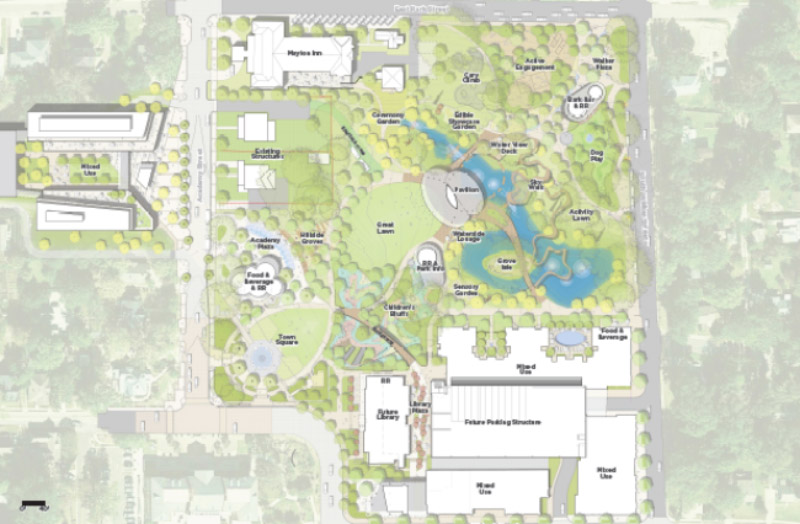 Back in November 2018, three concepts for the park were shown and Cary residents were encouraged to give their feedback. Doug McRainey, Cary’s Parks, Recreation and Cultural Resources director, said the second concept was a clear preference.

“It came down to the location of the different uses. With the Children’s Play area, there was a large preference by the public for it to be adjacent to the library,” McRainey said, explaining that this location would make it easier for programming between the library and the children’s area.

Other location preferences McRainey said were in public comments included keeping the dog-centric elements on Walker Street because it is closer to residential spaces and having sports (labeled as “Active Entertainment”) along Park Street so it’s away from the Great Lawn in the center. McRainey also said public comments wanted a community and ceremony garden closer to the Mayton Inn.

Cary Councilmember Don Frantz, whose district includes Downtown Cary, called the master plan a “bold vision” and said a large downtown park has been a priority of his since he joined Town Council.

Frantz said parts he particularly likes are the Pavilion and Great Lawn in the center, space for farmers markets and restaurants and the Children’s Play area near the new library.

Frantz also said he’s excited by the stormwater pond, which McRainey said is important not just to control water runoff but also for the park’s overall value.

“It’s designed as the aesthetic feature of the park,” McRainey said. “It will collect stormwater from all of the development on the block, but it also needs to be aesthetically pleasing.”

Lining the pond will be decks, seats and other features so each segment of the pond will feel unique, McRainey said. There will also be a network of bridges as well as stonework to make the water ripple and have “the feel of moving water,” as McRainey put it.

Frantz also added as engineering and design goes forward, the rest of the Downtown Park will not exactly match the master plan. 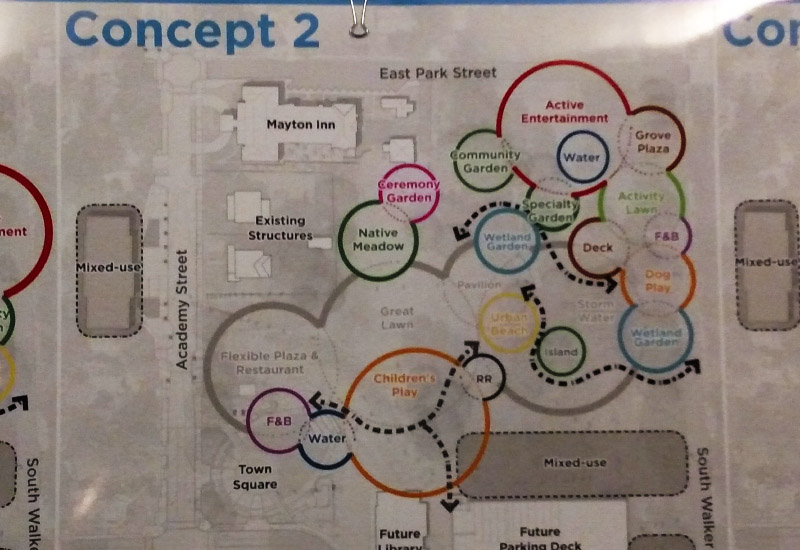 The Downtown Cary Park concept the master plan is based on

While the sketch for the master plan highlights the former site of the current Cary Community Library, McRainey said it will not be an extension of the park.

“The consultants took a stab at the park and where they thought adjacent buildings might fit in,” McRainey said. “But there are no plans for that now.”

While McRainey said there are currently no plans for the future of the site of the Cary Community Library – to be replaced by the new Downtown Library currently under construction adjacent to the park – he also said it will be redeveloped in the future.

One feature of the Downtown Cary Park McRainey said makes it unique is it will be actively programmed with events, contrasting that with many neighborhood parks McRainey said are not programmed.

“All acres will be programmed and developed. We want this to be a park all of Cary identifies with. We won’t take a passive approach and say ‘if we build it, people will come,'” McRainey said. “The park will energize downtown.”

Frantz said the need for extensive programming is clear to town staff and he said the town will need to have the will to make this happen.

“This level of programming is somewhat new to us. There will be some growing pains,” Frantz said. “But we’re committed and we’re excited.”

At the November 2018 meeting on the park, consultants hired by the town for the Downtown Cary Park talked about the importance of having year-round events as well as evening events, with everything ranging from fitness to festivals to children’s events to movies and more.

“The range of programs runs the gamut,” McRainey said.

Town Council votes on the master plan at the Thursday, March 14, 2019 meeting, starting at 6:30 PM at Cary Town Hall. Before the meeting, residents can learn more about the park at an information session at town hall from 4 to 6 PM, including a virtual reality headset to let people visualize the park.

To fund the park, Cary residents will vote on a $50 million bond referendum on Tuesday, October 8, 2019, though that date is subject to change. Town Council has already appropriated $1.825 million for early design work. Construction is expected to start next year and be finished by 2022. 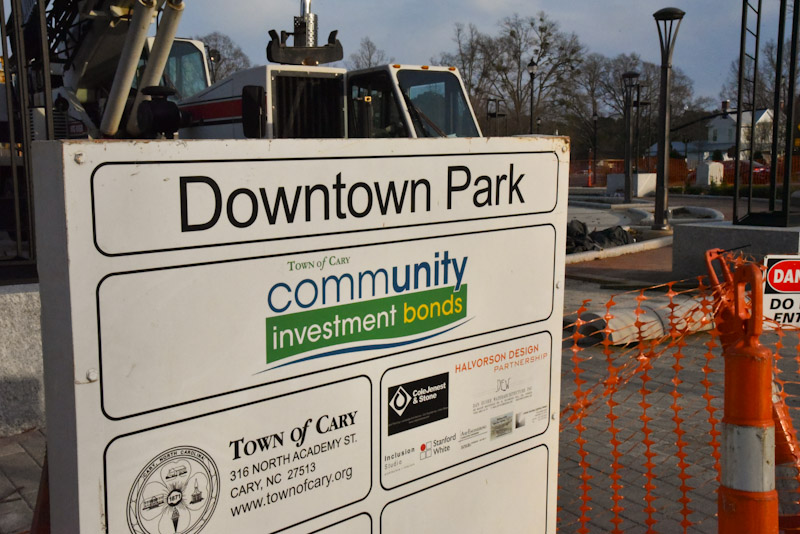