Cary, NC – Approved in 2001, the Town Center Area Plan (TCAP) was Cary’s vision and planning document for downtown redevelopment. Also approved at that time was the current zoning downtown. 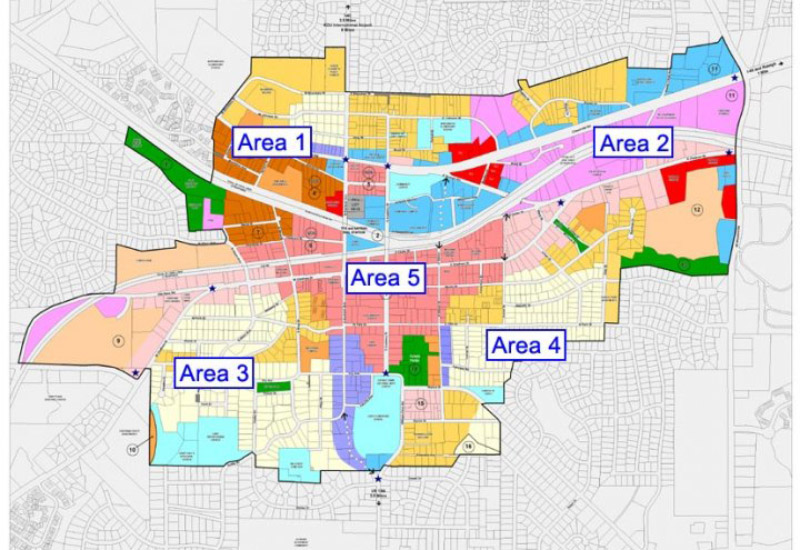 The vision for downtown Cary as defined in the Cary Community Plan is: Downtown Cary will be a vibrant, sustainable, historic, pedestrian oriented urban downtown, rich in charm and character. As the “heart and soul of Cary,” people will work, live, visit, recreate and shop in downtown. There will be an emphasis on office, residential, retail, entertainment, and civic development. Downtown will be supported by a multi‐modal transportation hub serving pedestrians, bicyclists, bus transit, train and motorists. Downtown Cary will be a community gathering place for surrounding neighborhoods, all of Cary, and the Triangle Region.

Thanks to targeted public investments, regulatory amendments, community support, Cary town staff AND a council who actually has the political will to act upon established plans and implement the vision, meaningful private investment is occurring downtown and there is a lot more on the way.

There are however, conflicts between that which the Cary Community Plan calls for and the zoning that was established with the TCAP that need to be addressed if we are to truly realize our community’s vision for downtown.
Building height is the primary issue. The community plan breaks downtown up into six sub-areas:

In each of those sub-areas the recommended building height is defined by stories (number of floors). The zoning however – which is what can legally be constructed – does not speak to stories and instead defines height by feet.

The East Chatham Gateway sub-area for example recommends building heights at 5-6 stories but notes that buildings can go higher depending on context and suitability. A significant amount of property in this sub-area however is zoned MXD (Mixed Use) which caps building height at 45′. You simply can’t build a 5-6 story building and keep it under 45′ tall.

At our recent council retreat we briefly discussed some potential Land Development Ordinance Amendments pertaining to building height – but we didn’t spend a lot of time on it as we were to have a more in depth worksession on the topic soon. I did however provide feedback that regardless of any changes proposed, I would not support increasing building height along South Academy St or the old library site when that redevelops to protect the character of the historic district and adjacent residences as best we can. Others who commented agreed.

That worksession was held this past Thursday.

The majority of the downtown core which includes the Central Chatham, North and South Academy sub-areas is zoned HMXD (High Density Mixed-Use). HMXD however has a range of building height limits depending on location. In the South Academy sub-area for example – which includes the downtown historic district – building height is capped at 65′. Areas of the North Academy and Central Chatham sub-areas however allow for 75-90 feet.

At the worksession it was proposed that we amend the HMXD zoning district to allow for 90 feet building heights throughout the district except within 100′ of South Academy Street and Chatham Street between Harrison Ave and Walker Street.

Building setback requirements along South Academy were also proposed to be 30’-40’ in keeping with the existing street rhythm (this is great!) and a minimum building height of 35′ was also recommended to eliminate one story new construction (current minimum is 20’) 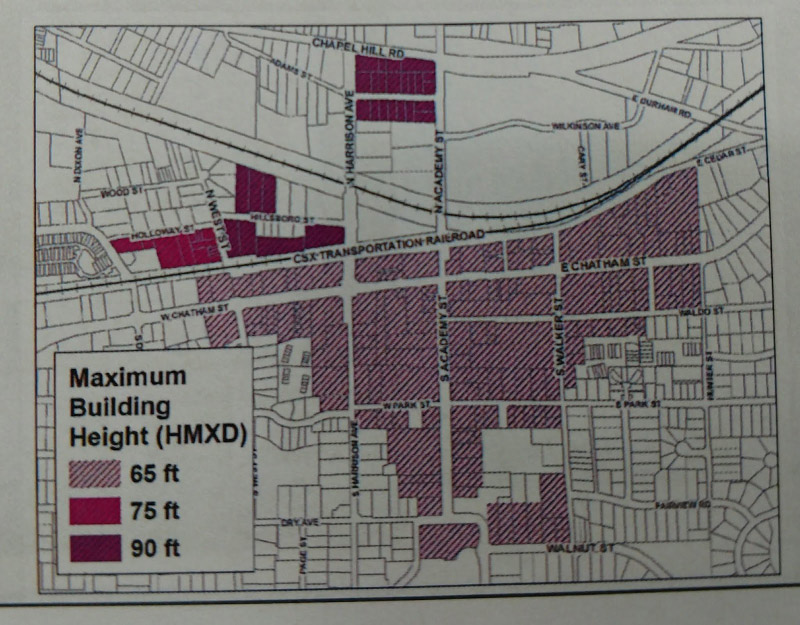 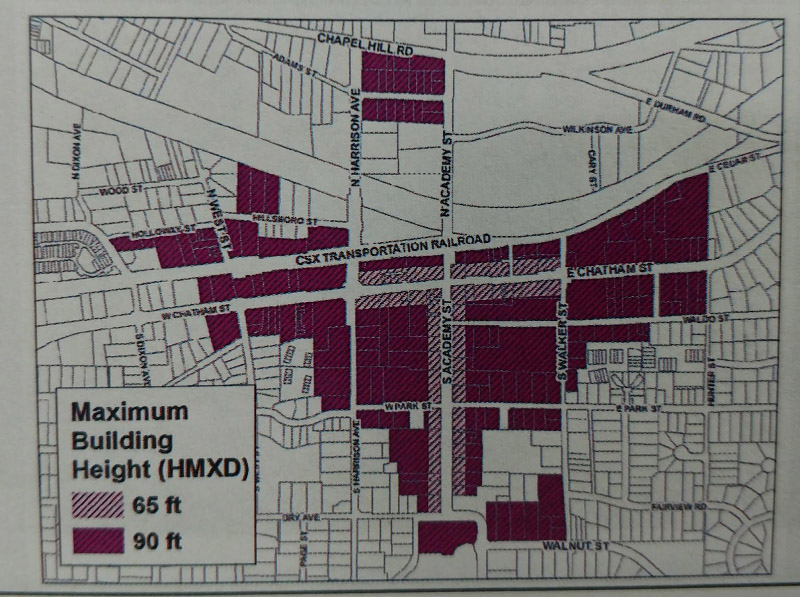 While this proposal would limit building heights fronting Academy St to 65’, once that same building was 100’ away from the street the height could then increase (step up) to 90’. That could result in a 90′ tall building directly adjacent to a single family/historic home. 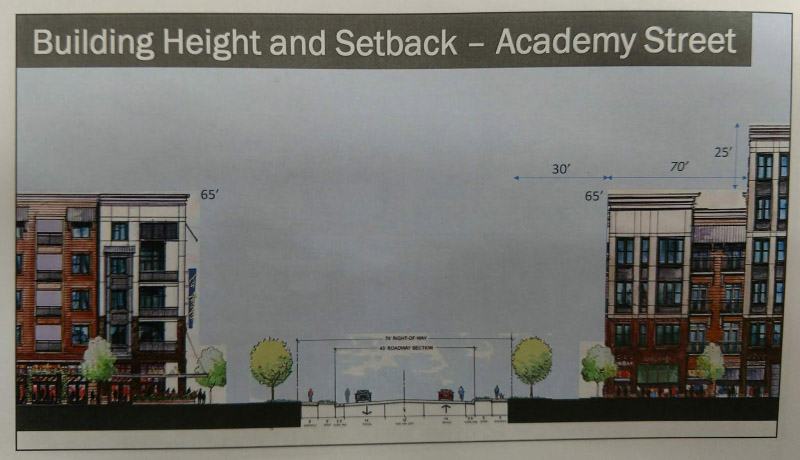 I was not pleased with the proposed zoning change to the South Academy sub-area. I found it insensitive to adjacent properties and the historic district and unnecessary. I believe 65’ is plenty tall enough – possibly even too tall along Academy St, Walker St and South Harrison Ave but there isn’t anything we can do about that. The zoning has been in place since 2001 and we can’t legally downzone someone’s property.

While we absolutely need to make some development ordinance amendments to align regulatory requirements with the vision laid out in community plan, that is not the case in the South Academy sub-area. HMXD with a height limit of 65’ meets if not exceeds the community plan recommendations.

From the South Academy Sub-Area Section of the Cary Community Plan: Along S. Harrison Ave., S. Academy St., Park St., and Dry St., building heights should complement and reinforce the historic built environment and small-town character, and will therefore be primarily 2 stories, except for landmark public and institutional buildings, such as the churches, Arts Center, and County Library. Buildings of 2-4 stories may be appropriate along Walnut and S. Walker Streets, in order to facilitate redevelopment, and since these areas are further away from the historic core of downtown. There will be cases where taller buildings can be accommodated, as long as designs are compatible with the predominant character of the street and adjacent and nearby properties, especially historic properties.

While I can appreciate the economic challenges the development community faces in regards to land acquisition and redevelopment costs, I haven’t yet heard a compelling case made as to why we should allow 90’ tall buildings in the South Academy sub-area. If an applicant thinks that they can make a compelling case, then bring it to council for a request for modification and we’ll consider it. We consider modification requests all the time – but to allow it by right is concerning.

Our community invested nearly 4 years creating the Cary Community Plan. It’s a dang good plan. I think we should stick to it until a compelling case is made otherwise.

Based on worksession materials staff was to also propose amending the MXD zoning district to allow for 55’ for residential buildings and 65’ for mixed use buildings that would address the conflicts between the community plan and zoning like that in the Eastern Gateway example mentioned earlier – but we never got that far. We couldn’t get past South Academy. I have no problem owning that.

There will be a follow up worksession held soon. I look forward to it.

April 2019 Films at the Cary Theater