Cary, NC – The Bunch of Jerks, aka the Carolina Hurricanesm played as perfect of a game as any team could and thumped the defending Washington Capitals 5-0 in front of an electric arena that hasn’t had this much excitement in years. The Canes knew the importance of this game as they were down 2 games to 0 in the best of 7 series and the chance of winning a series going down by 3 games is rarely done.

The PNC Arena was deafening as the Caniacs showed up in force, having begun their infamous tailgating more than five hours before the first drop of the puck. The rally towels were waving in a sea of white when the Canes first got on the ice, with the noise level so loud, you couldn’t hear the siren even though NCSU basketball coach Kevin Keatts had it cranked up as fast as it would go. The Caniacs emphasis of RED during the National Anthem broke all decibel records for a single word. 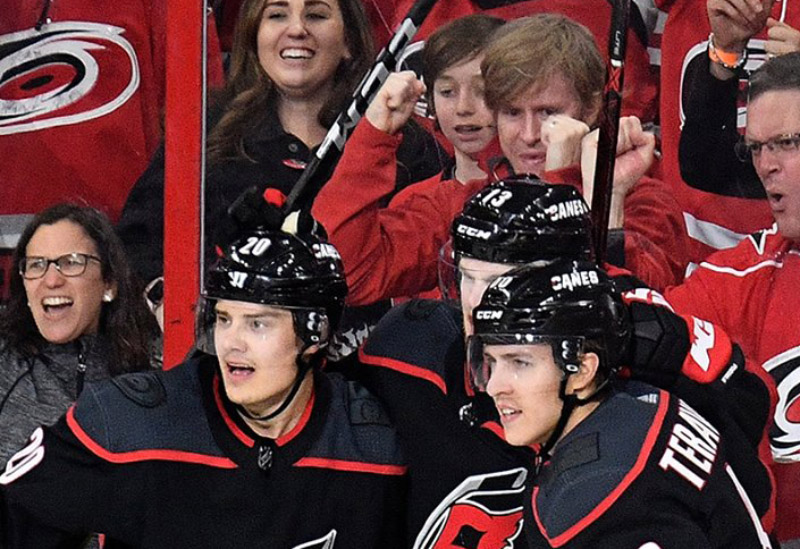 With the results of this particular game being so important, both teams came out hitting anyone with an opposing sweater with checks within and outside legal limits. There were more swipes with the sticks against opponents’ legs behind the play that, sooner or later, either the officials had to start making calls or this game was going to get very ugly. Probably more so in hockey than any other sport just because of the allowed physical contact, albeit basketball has the contact but much of it is not allowed, just is now part of the game as is palming, traveling, moving picks, the hitting was hard, heavy, within or over the limits and quite often.

Every player on both teams were actively partaking in the physicality. Michael Ferland had the Match Penalty rescinded from the prior game as the NHL reviewed the tape and found the hit to be legal, however, he only played three shifts for a tad over two minutes as he got hurt after a check to Brett Connolly. Ferland must be nursing a lingering injury, good chance a shoulder problem as his play was off for the last 18 games or so.

Warren Foegele opened the scoring at 9:43 when he stole the puck off a mishandle by Brooks Orpik shoving the puck to Brock McGinn behind the goal. Ginner sent the puck up to Justin Faulk on the right point, sending a wrister to the goal with the puck hitting Foegele then falling over Braden Holtby’s shoulder into the net to give the Canes their first lead of this series. After that goal, the hitting and stick swats at legs got more intense. Andrei Svechnikov and Alex Ovechkin were carrying over animosity from the prior game with Ovi cross checking Svech and Svech swatting Ovi. With the play just clearing the Caps end, Ovi turned to Svech, dropped his gloves and the first major fight started. Svech was clearly outmatched against the larger fellow Russian as Ovi got a hard right to Svech’s jaw knocking him out with Ovi getting in another shot as Svech was going to the ice then landed on him with a fist going to the Adam’s apple as Svech laid in a daze. Has to be a concussion and could be out for the remainder of the series. Too bad, as Svech has been playing his best hockey of the season and will be sorely missed.

Foegele notched his second of the game at 6:09 in the second on a play starting with a clear in the Canes end by Teuvo Teravainen. Turbo went through the neutral zone with Foegele on the right and Sebastian Aho catching up to the play on the left. With only one defender back, Turbo got the puck over to a lonely Seabass who faked a shot then passed to a totally open Foegele who slammed the puck high to put the Canes up 2-0. Smart play to go high as Holtby slid over to protect the line for a low shot.

Dougie Hamilton added to that at the 11:09 mark after great play every Cane on the ice. Hamilton and Jaccob Slavin were passing back and forth up high when Slavin made a cut down the boards passing over to Jordan Staal in the mid slot with his back to the goal. Hamilton went to the middle of the inside blue line when Staal passed up to the big guy who immediately let go a hard shot that got past Holtby as Foegele was the perfect screen in the dirty area.

The choppiness continued throughout the period with coach Rod Brind’Amour juggling make shift lines having two forwards unavailable. Smart move by Roddy, part out of need but part as he knows the more opposing players are on the ice at the same time the higher likelihood there could be a confrontation sooner or later and the game plan at is time was stay out of the box.

Orpick, the same guy who broke Erik Cole’s neck the year the Canes won the Cup, tried to take out Jordan Martinook with a vicious stick to the groin behind the play that had Marty going down and laboring to make it back to the bench. If only the NHL would look at plays like this after games to stop this nonsense. The period was one of near perfection for the Canes as they only allowed a single shot on Mrazek which must be a record low for the Caps.

Hamilton netting his second powerplay goal of the game just under midway in the third again on great quick passing on the outer umbrella ending up with Hamilton slamming another long bomb to put the Canes up 4-0 and the decibel level going over 112.9. The Canes were on the powerplay as Lars Eller got called for roughing Trevor van Riemsdyk in front of Petr Mrazek. Eller taunted TVR with the hope of offsetting penalties but it was Mrazek who skated out of the crease, got in between the two players and told TVR to calm down and skate away which he did. The shoving, holding, swatting, interference and all around sandpaper type play was continuing as the officials were letting the boys play.

While the Canes can play toe-to-toe with any team, they’re not built for outright fights so Roddy must have told the Team to be aggressive but smart and not engage in something that could lead to another player going down. Broooock McGinn, as the announcer calls him, finished the scoring late in the game on what may have been the best looking goal of the game. With the Caps clearing the puck from their own end, Staal used his long reach to touch a pass just over the blue line intended for Nicklas Backstrom. Martinook was able to introduce Backstrom to the far boards allowing Staal to retrieve the puck.

Staal fed Ginner coming down on the left who took his time picking a corner sending a wrister top shelf from 25 feet out to close the scoring. Only question left was would Mrazek get his third career playoff shutout. With just second left, the Caps had their most formidable attack of the game forcing Mrazek to make key saves after being bored for most of the game.

Great game and gets the series in the Caps favor, 2-1 with game #4 this Thursday. I can’t imagine the PNC Arena getting any louder than it was for this game but don’t sell short the Caniacs ability to earn their reputation of the loudest house in the NHL. 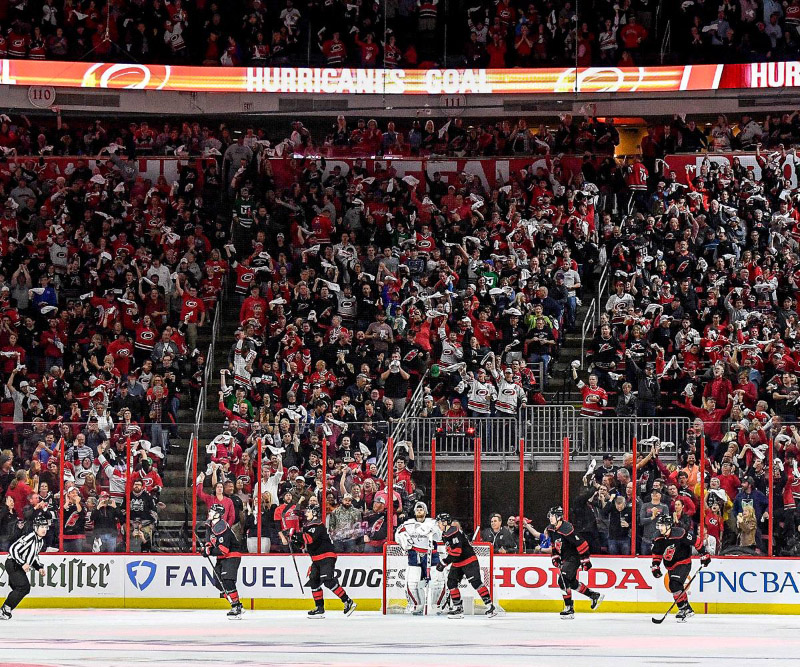