Cary, NC – North Carolina FC continues its strong showing this season with a win at home, giving them their fourth win of the season.

North Carolina FC took on Hartford Athletic at Sahlen’s Stadium at WakeMed Soccer Park on Saturday, April 27, 2019, not long after the home team had their first loss of the season. But they did not let that loss ruin their confidence and NCFC scored in the first five minutes. Steven Miller passed to NCFC’s scoring leader Marios Lomis, who maneuvered around Hartford’s defense to get into position and got the game’s first goal.

In response, Hartford played a quick and aggressive game for the rest of the first half, which made it difficult for NCFC to get into a scoring position. But right as the first half was ending, Dre Fortune was able to get control of the ball briefly and used his opportunity to hit a corner kick to Sam Brotherton. Brotherton was already positioned in the box and hit a close-range kick, bringing the score up to 2-0 right as the first half ended. This was Brotherton’s first goal for NCFC.

The home team’s attack continued into the second half, as Miller kicked from far outside the box and hit the goal’s crossbar and ricocheted into the net, raising the score to 3-0.

It wasn’t a shutout for NCFC as Hartford stuck with their aggressive play style, which paid off in the 58th minute. Hartford’s Alex Dixon was far outside the box and hit a long shot right to the net. NCFC goalkeeper Alex Tambakis mistimed the ball and dove for it too late, bringing the score up to 3-1.

The game was not over there as NCFC got one last goal in the 82nd minute to finish up the match. Robert Kristo, fresh off the bench, intercepted the cross from Manny Perez and got a 10 yard goal. NCFC won 4-1. 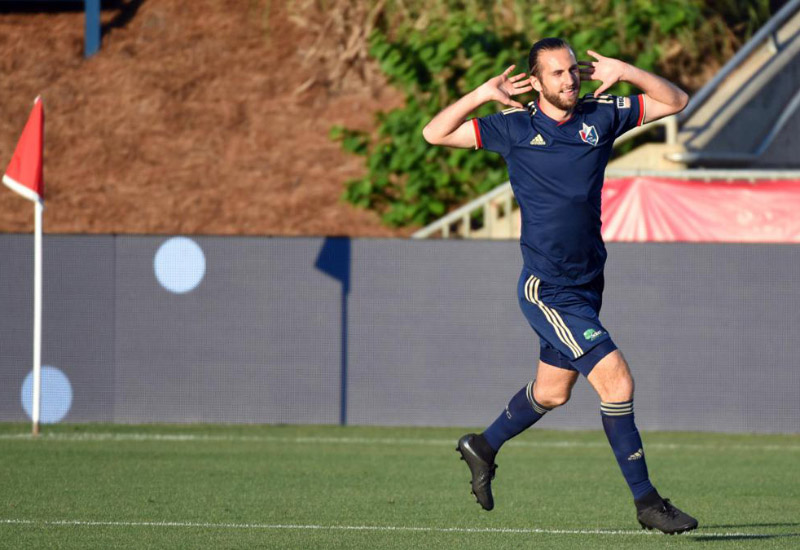 With this win against Hartford Athletic, NCFC is now the fourth-ranked team in their conference, with four wins, two draws and one loss. Hartford is ranked last in the conference, only taking losses this season.

“All in all, a good result,” said NCFC Head Coach Dave Sarachan. “I thought the energy was good from the start. Some of the things we have worked on in the final third came through tonight. We deserved to win the game. It’s always good and encouraging to get four goals in a game. We were pleased.”

Marios Lomis is playing very well this season; not only is Lomis the team-leading scorer so far but he is tied with Matt Fondy for most games in a row with a scored goal.

NCFC also has strong showings from players who have moved up from their Youth Academy. Dre Fortune stood out in previous seasons and he had another good showing this game, but NCFC also relied on the talents of Manny Perez, DJ Taylor and Alex Comsia.

NCFC takes a long break before the next home game, against Birmingham Legion FC on Saturday, May 18, 2019 at 7 PM.

May 2019 Movies at the Cary Theater
Scroll to top