Cary, NC – On Wednesday, June 5, 2019, Chuck Smith, VP of Planning and Development for Preston Development Company, gave members of the Cary Chamber of Commerce a sneak peek at Chatham Park, a project the company has spent the last several years planning in Pittsboro and Chatham County.

The massive 7,000-acre project has been in the works for more than 12 years and will not be finished until roughly 2050. This will be the largest master plan development in all of North Carolina to date. Because of the long timeline, Preston Development has focused their land use plan on the rapid changes taking place in technology, housing styles and transportation. The plans include walkable connectivity to parks and shopping with most housing within a five-minute walk of a park. With the rise of ride-sharing services such as Uber and technology advances in driverless cars, Preston Development has considered how this will affect parking, roadway design and even neighborhoods with shared back alley driveways and additional drop-off lanes. Chatham Park is near Downtown Pittsboro, part of Chatham County. The town’s population was 3,743 at the 2010 census and estimated to 4,221 in 2017. It is also the county seat for Chatham County. Located at the intersections of US 64 and NC 15-501 and on the west side of Jordan Lake. The area is currently 90 percent residential and this development will flip that statistic. 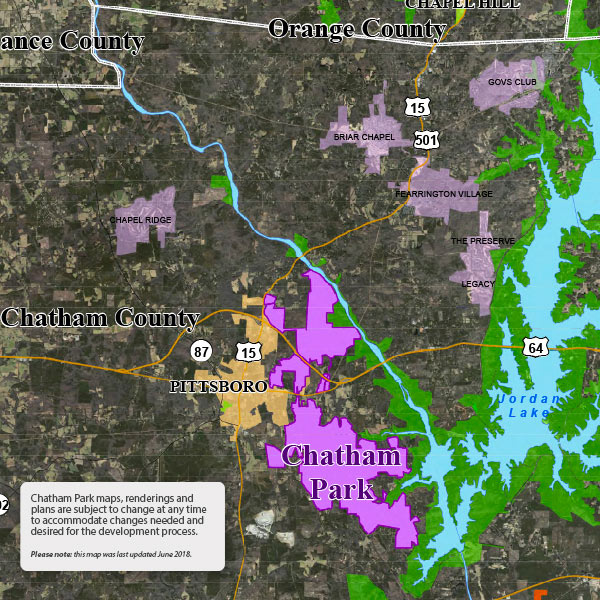 The planning area for Chatham Park includes 7,100 acres and will take 35 years to build out. When complete, there will be as many as 22,000 homes (approximately 60,000 new residents) as well as 22 million square feet of non-residential. It represents an opportunity to plan from a green field state,  a community that will incorporate new connected home technologies, mixed-use development with housing, shopping and workplaces, as well as connections to a future 50-mile greenway system. Chuck Smith compared it “to the equivalent of two Prestons.” The location is convenient to Chapel Hill via 15-501 and Cary from US 64.

One major emphasis for the developers is the focus on water quality. The Haw River is an important water source to the region, feeding into Jordan Lake which supplies Cary and many other communities with their water supply. The plan is to maintain as much open space as possible along the Haw. Stormwater planning incorporates regional treatment concepts with the plans to create public space around water.

A 500,000-gallon water reclamation plant is under construction. Pittsboro does not currently have its own plant and is now in an agreement with Sanford for sewer and water treatment. A one million gallon-per-day facility is in future phases and will be state-of-the-art with a green roof and possibility for education opportunities for schools and colleges.

Smith described the influence of the Smart Cities trend and asked the audience how many had an Alexa or other smart home devices. About half of the audience raised their hands. These trends are leading investment in high-speed internet, and the need to install and control the conduit going in the ground before construction begins. Homes can be built with these technologies incorporated. EV charging stations will be planned and the firm believes electric cars are the future. They also partnered with Strata Solar to install a 45-acre solar farm that can power up to 750 Chatham Park homes. This has been planned as the first of such farms in the development.

Parking garages will also need a mix of uses, or become smaller as more people share rides. Chuck pointed out that most cars sit parked for 90 percent of the time. With ridesharing or driverless vehicles, for instance, people could call up a car when they need to go somewhere, but would not need one most of the time, thus freeing up the need for large flat-lot parking lots. He previewed a video of someone heading up to the rooftop of her office and then boarding a driverless drone vehicle to fly home.

How will the area connect to the Triangle and beyond? The state has a $100 million planned roadway called Chatham Parkway. This new road will function as the area’s ring road (like Cary Parkway or the Maynard Loop). It will have an interchange at US-64.

The use of “complete streets” will mean that stormwater will be addressed in the right of way adjacent to the road, so the pollutants from vehicles and run-off do not end up in the river, lake or drinking water. Preston Development has built one mile of road so far, with the State slated to complete their portion in about four years.

Being billed as the New RTP, it can be built from greenfields to incorporate a mix of uses (unlike the campus-like corporate buildings in Research Triangle Park). Workers can live, work, play and connect all in one place. The site will be roughly the same as RTP, at 1,000 acres within the 7,100 acres of Chatham Park. 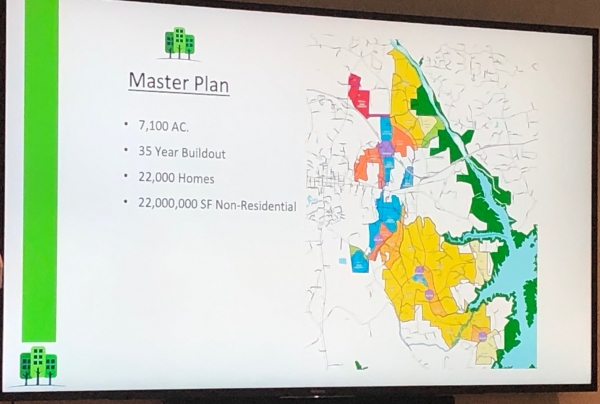 What’s Been Built to Date?

Within the North Village area, which lies along the 15-501 corridor, the first area to be built is called Penguin Place and was fully leased out with shops and serivces as of June 2018. The Vineyards residential area has started construction and will be comprised of 500 homesites for cottages, townhouses, single-family and custom homes. Of those, The Cottages are affordable housing at  between 850 and 1,200 square feet and will begin construction this year.

Phase 1 of Chatham Park is called North Village and the land use plan includes 7,000 residential units, and a Village Center with one million square feet of retail,  a medical village, a UNC hospital facility, a YMCA, land designated for a Chatham County elementary school, a 25-acre park and a Thales Academy private school. That area is just 10-15 minutes from Chapel Hill down 15-501. These are all in the planning phases and coming within the next two-to-three years. Beginning this fall, affordable housing h

Next up is Mosaic or Chatham’s version of North Hills. This broke ground in 2018 and its 350 acres should be completed in two years to include 300 apartments, an artists community, senior living, church, movie theater and a mix of office and retail, Chatham County’s first hotel and some open space.

To view more about Chatham Park, check out the website or follow their Facebook page. Note this story is written as a reporting of what was presented at the Cary Chamber of Commerce meeting. For others views on the plans visit the Haw River Assembly website.

It’s All Pimento in Downtown Cary

Bill Fletcher: Graduation 2019, Questions for the Future and More
Scroll to top