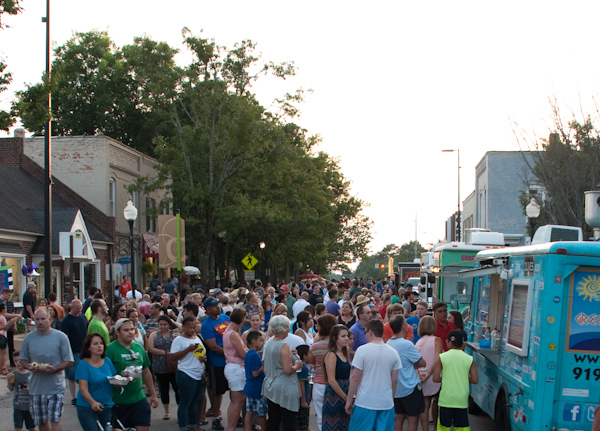 The Cary Theater is celebrating women-driven and directed films with three such movies this Thursday. They are screening “Whale Rider” at 2 PM, “Bend It Like Beckham” at 7 PM and “Equity” at 9:30 PM.

Koka Booth Amphitheater holds its Movies by Moonlight outdoor movie event this Thursday, with a screening of the R-rated comedy “Game Night” at 8:30 PM.

The North Carolina Symphony performs at Koka Booth Amphitheater, playing the music of rock-brass fusion band Chicago, as part of NC Summerfest. The performance, along with brass band Brass Transit, starts at 7:30 PM.

Comedian, actor and writer Deon Cole performs at Raleigh Improv in Cary’s Parkside Town Commons all this weekend, with shows at 7:30 and 9:45 PM this Friday.

“Weird” Al Yankovic performs with the North Carolina Symphony this Saturday at Koka Booth Amphitheater. You can see the comedy music icon perform starting at 7 PM.

Sertoma Amphitheater hosts Al Strong and the 99 Brass Band for a free concert this Saturday, starting at 7 PM. This show is presented by PineCone.

Coming off the buzz of the United States’ World Cup win, North Carolina Courage takes on Reign FC for a home game this Saturday at 7 PM. They play at Sahlen’s Stadium at WakeMed Soccer Park.

There are more Saturday events on the CaryCitizen calendar.

West Regional Library hosts “Music in the Library” with classical Chinese music, all from Lisa Zou’s Music Studio. The performance starts at 2 PM.

The Kennedy Theatre in Downtown Raleigh is performing “I Am My Own Wife” all this weekend and next weekend, telling the true story of a trans woman who survived through both the Third Reich and East German control. The show starts at 8 PM, with an extra 2 PM show on Saturday.

Comedian DC Curry performs at Goodnights Comedy Club in Raleigh this weekend, with shows at 8 PM on Thursday and 7:30 and 10 PM on Friday and Saturday.

The Durham Bulls host “Stranger Things Night” for a game this Thursday against the Norfolk Tides. Teams will wear Stranger Things-inspired uniforms and there will be other references to the Netflix show, which contains its own numerous references to Durham. The game starts at 7:11 PM.