Morrisville, NC – To kick off a series of town hall talks in Morrisville, North Carolina Senator Wiley Nickel (D-Wake) spoke and took questions from the audience, with most attendees asking about gerrymandering, the potential “RDU quarry” and Medicaid expansion.

Nickel, elected in 2018 and representing Morrisville, Cary and Raleigh in the 16th Senate district, spoke on Wednesday, September 4, 2019, invited by the Morrisville Town Council to town hall chambers.

Much of Nickel’s town hall was centered around a recent unanimous Superior Court ruling that state House and Senate districts must be redrawn. Roughly a third of districts in the state will be redrawn, based on the court’s ruling against “extreme gerrymandering.” Wake County recently had its districts redrawn, so locally, Nickel said things will stay the same.

Several people in attendance asked Nickel for details on the redrawing and for assurance that this will result in fairly drawn districts. Nickel said he is seeing signs from both Democrats and Republicans, including Senate President Pro Tempore Phil Berger (R-Guilford and Rockingham), that they want to move forward fairly. Nickel also said he thinks the court ruling that maps must be drawn in public view is reassuring.

“I’m optimistic,” Nickel said. “Voters should pick their candidates, not the other way around.”

Nickel also endorsed an independent commission to draw all election maps, for both state elected office and federal House seats, pointing to Ohio and California as positive examples of this in practice.

While Nickel said he was optimistic about bipartisanship when it comes to districts being redrawn, his optimism on the matter stopped there. Namely, Nickel said he has been frustrated by the influence of Berger in the Senate.

“Phil Berger controls most of it. If he says no, it doesn’t go forward,” Nickel said.

He brought up concerns of partisanship primarily around the state budget. For Nickel personally, he said his biggest issue with the budget is Medicaid not being expanded.

“It’s free money from the federal government, and we’d join the 37 other states that expanded,” he said.

Multiple attendees also asked about Medicaid expansion and Nickel said many Republicans he talks to in the General Assembly support it in private and feel if they publicly support expansion, they will lose their base of support. At the same time, Nickel said he did not think the Democrats have a clear idea of how the budget fight will end, nor do the Republicans.

One other specific disagreement with Republicans Nickel brought up was over school funding. While Nickel and North Carolina Governor Roy Cooper support a bond for new school construction, Nickel said Republicans want a pay-as-you-go approach for roughly half as much money as the bond.

“With a bond, you know where the money goes,” he said. “You know what counties get what.” 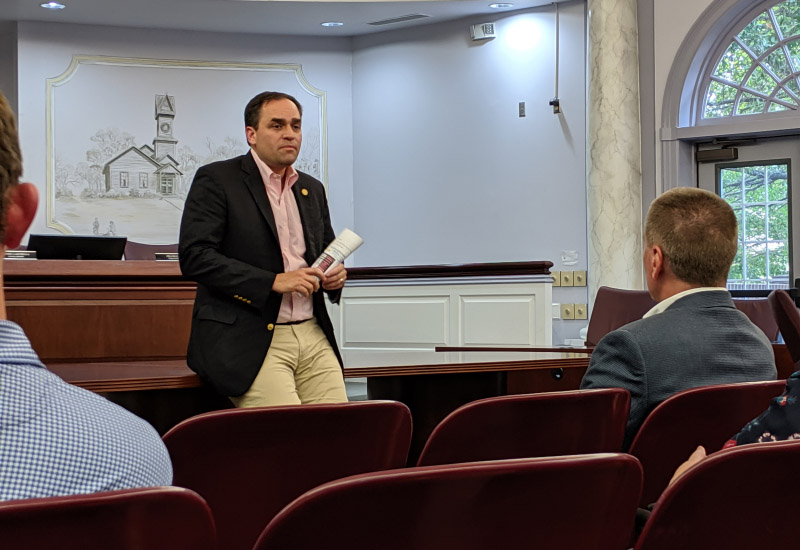 The Quarry and the Environment

One of the first questions Nickel got once he opened the meeting up to the audience was about the potential quarry going into the Odd Fellows track – 105 acres of woodland – owned by Raleigh-Durham International Airport. As Nickel described it, both RDU and the Wake Stone Corp. are trying to circumvent local rules requiring county and municipal governments to get priority in the sale of public land by making this a lease instead of an official sale. However, since the Wake Stone Corp. wants to use this land as a quarry, Nickel said he does not think it is a true lease.

“If you lease a car and you bring it back without an engine, that’s not a lease. That’s a sale,” he said.

Both the Umstead Coalition and Triangle Off-Road Cyclists are suing RDU over the lease, which is halting mining. Raleigh and Wake County have not joined in the lawsuit, though Nickel speculated this will be a significant issue in this year’s Raleigh council and mayoral election.

Nickel said he is hopeful about the lawsuit but also said this is all being driven by RDU’s need for money, which they are currently behind on due to greatly increased demand.

When it comes to road funding around the state, Nickel said he did not have any ideas on how to address the growing funding gap. As fuel efficiency increases and electric vehicles become more common, less revenue for road building is coming in through gasoline taxes, all while demand is growing.

“We likely need an extra billion a year,” he said.

Nickel also said he worked behind the scenes to kill legislation that would have increased registration fees for electric vehicles (EV) to $230 and to $115 for plug-in hybrids. Nickel, who said he himself drives an electric car, said this would have made North Carolina the most expensive state to be an EV owner. He talked about the dangers of climate change and said the planet is already “past the tipping point” on greenhouse gas emissions and said EVs are one way to protect the environment, adding that he wants North Carolina to get to 100 percent renewable energy by 2050.

But on the subject of traffic overall, Nickel said the only way to combat the problem with public transportation and rail.

“I’m a huge supporter of getting people out of cars and onto transit,” he said.

“These are the people who help kids learn to read and write,” he said.

Nickel also said there needs to be more funding for school nurses, counselors and social workers. In his tours of Wake schools, Nickel said he has not seen a single nurse because they are often splitting their time between multiple schools. Also, by having these kinds of workers in local schools, it can help prevent school shootings by catching students who may be thinking about carrying out a violent attack.

On the subject of gun violence overall, Nickel said the General Assembly “hasn’t achieved anything” but said there is the potential for “red flag” bills passing, which would allow law enforcement to take someone’s guns away if a judge finds they are presenting a reasonable threat or signs of a threat.

While there are plans for more similar town halls in Morrisville, there is not currently a next one scheduled.