Cary, NC – With Cary’s election day only a few weeks away, candidates in all four Cary Town Council elections gathered for a forum to talk about redevelopment, the tax rate and more.

The candidate forum, hosted by the Cary Chamber of Commerce at Prestonwood Country Club, took place on Wednesday, September 25, 2019. Early voting is currently in effect for the election, with Cary’s election day on Tuesday, October 8, 2019.

The candidates who attended the forum were: 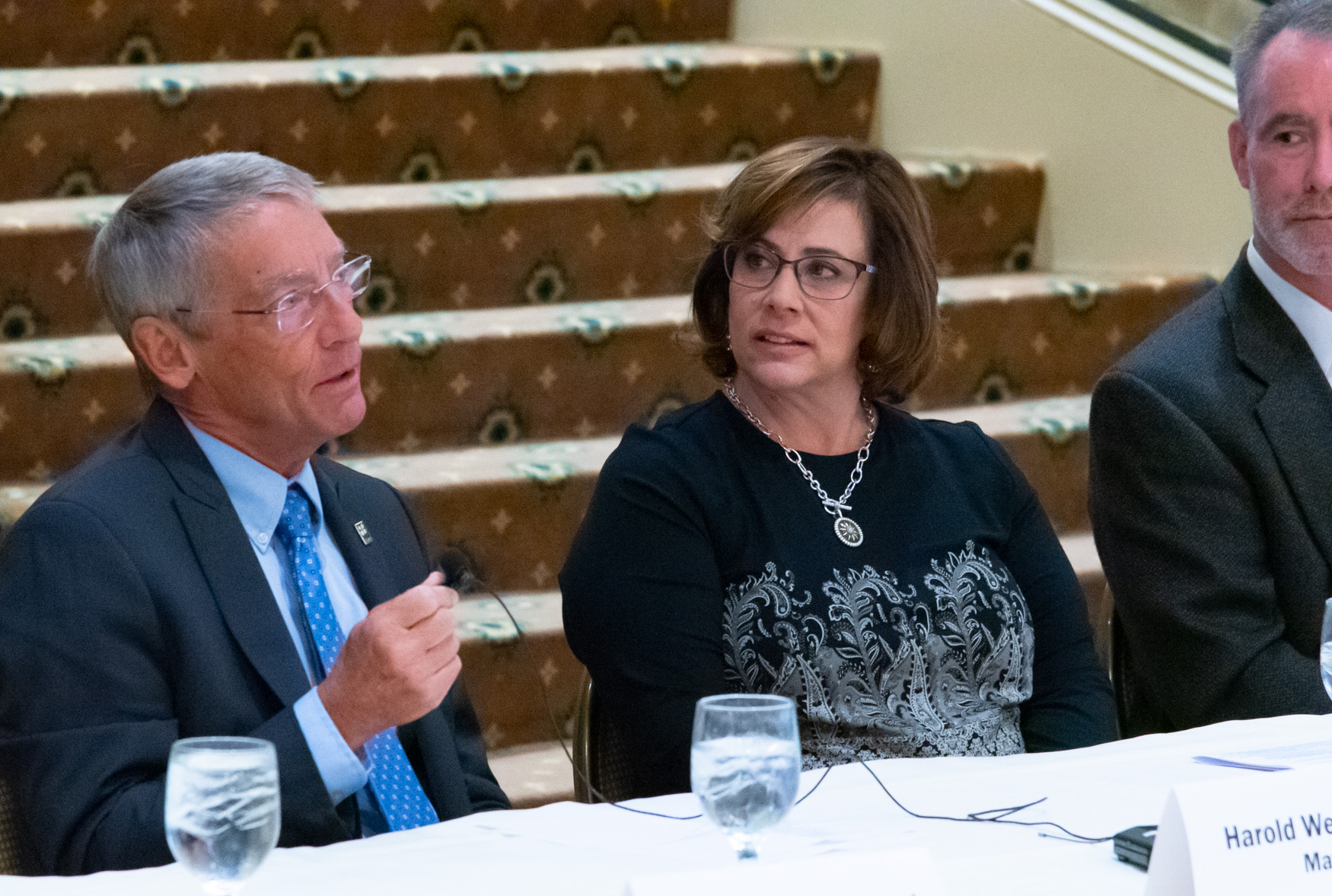 To start the forum, all candidates were asked about their top priorities for Cary and most candidates answered by talking about the importance of redevelopment and infill in Cary, since there is very little open space left. Weinbrecht said for the Town Councils of the future, managing redevelopment will need a mix of insight and political will, since all infill will involve some sort of impact on neighboring developments.

“It takes a lot of understanding the issues, which takes a lot of experience,” Weinbrecht said. “It also takes a backbone because those people who are impacted are going to complain and complain loudly.”

Bush similarly said the challenge for Town Council will be finding “harmony” between new and old communities as redevelopment comes in.

Friedrich, who highlighted her experience as the Department of Commerce’s Deputy General Counsel, said redevelopment is more expensive than building on untouched land and with several large redevelopment projects looming, naming the Cary Towne Center specifically, Cary has to make sure it gets its projects right.

“Eyes are on this development all across the Triangle,” Friedrich said.

But not all candidates pointed at redevelopment as their top priority. Liu said her priority was balancing growth and, speaking to the assembled Chamber of Commerce members and pointing to her own experience running a law firm, said helping the business community in the area will accomplish this.

“We have to represent those people that are not the new, shiny neighborhoods out West,” George said.

For Frantz, the top priority he talked about is building up Downtown Cary and said there has already been progress. Frantz, who represents Downtown Cary in his district, said part of this is a result of reducing “burdensome regulations” to encourage businesses to open there.

“The reason I ran for Town Council was because people were talking about revitalizing Downtown, but nothing was happening,” Frantz said. 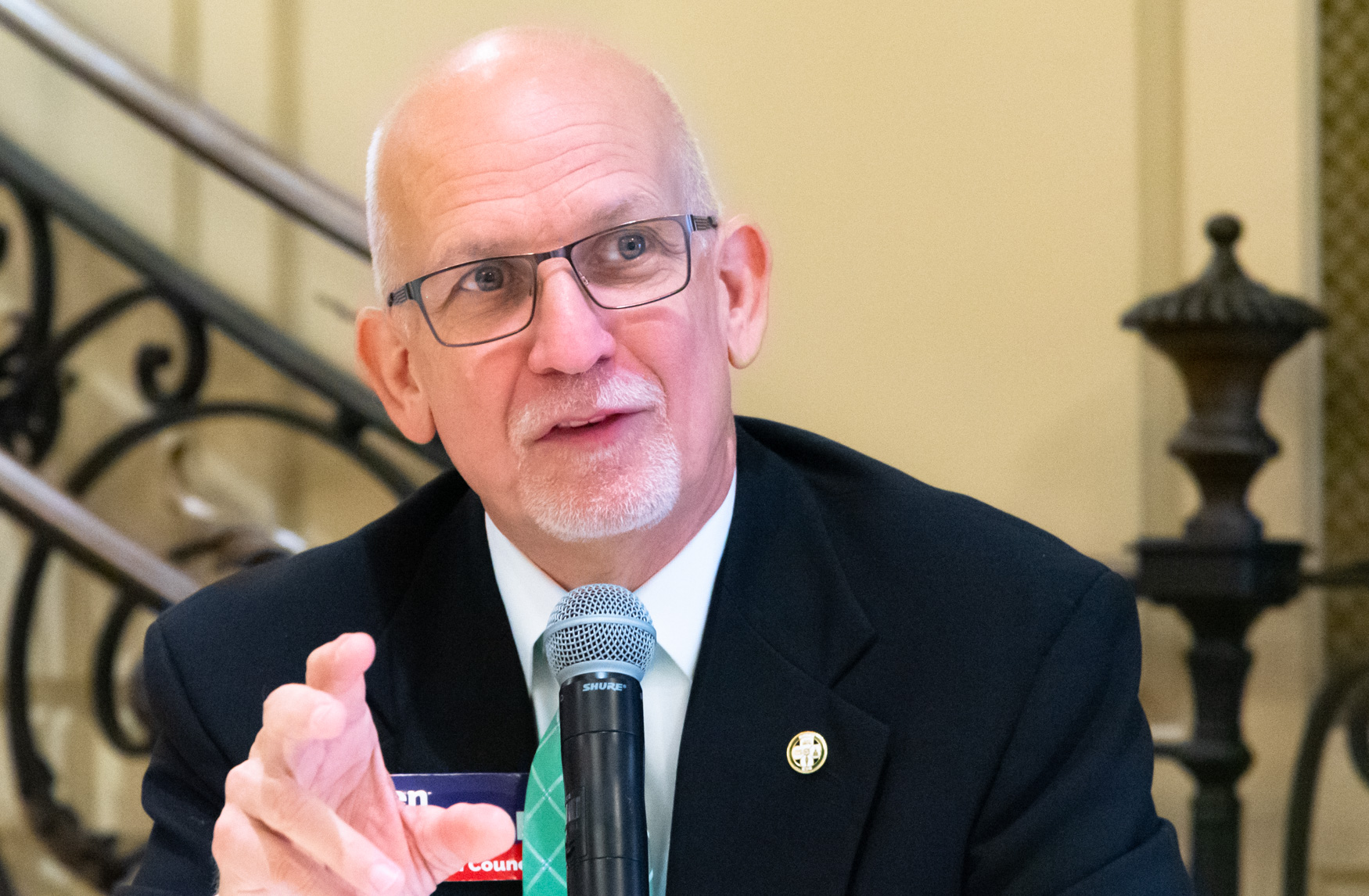 Cary has the lowest property taxes in Wake County and as part of the forum, candidates were asked if they would go up any time soon. Nearly every single candidate said yes in one way or another, but most mainly talked about the ways that Cary does or should save money.

Speaking first, Frantz said Cary has new needs and new expenses as it matures, and tax rates have been able to be so low because of high property values. Frantz said, to maintain this balance, land needs to be set aside for office development, but he did say there may be a time when taxes are raised.

“There might come a time when we need to raise taxes, but it will only be if we need it,” Frantz said. 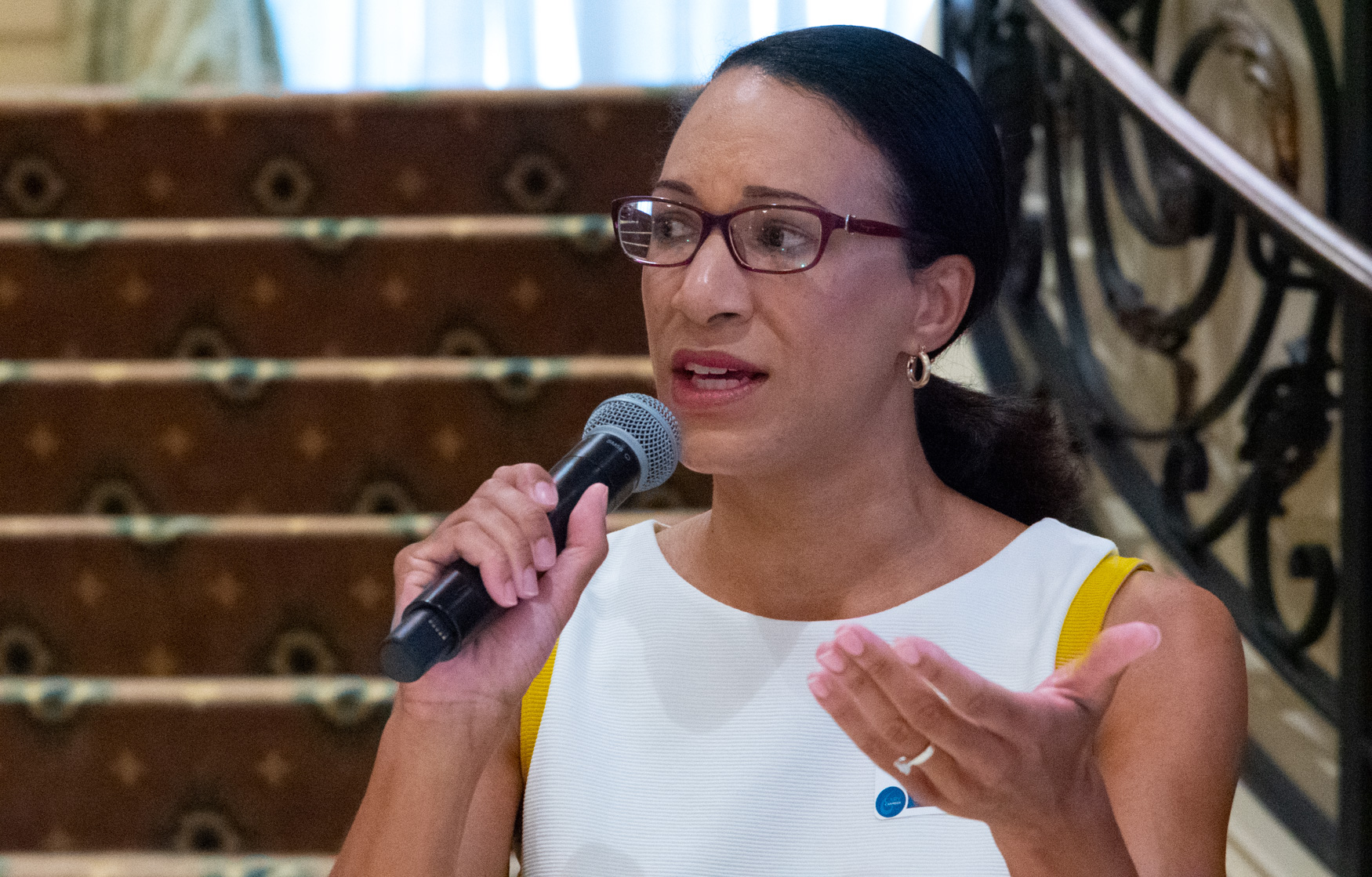 George encouraged the audience to think about property taxes by comparing buying a house in Cary to buying a mutual fund. He also said Cary is already fiscally responsible, with a smaller budget this year than last year.

“We lead the the way by being so bipartisan. We’re not deciding to spend or not spend money as a philosophical issue,” George said. “We’re spending money that we need.”

Friedrich said taxes would likely raise around 2022 but also said state and federal grants can help with Cary’s expenses, such as combatting stormwater flooding.

“Those are some of the tools we can use to relieve the burden for taxpayers,” Friedrich said.

The only candidate who was explicitly against raising taxes in the future was Liu, who said people and businesses come to Cary because of its low tax rate, for property and corporations.

“We want to support our businesses as much as possible,” Liu said. “And for small business owners, they are the ones taking on the risks to open a business.”

Weinbrecht said Cary has a re-evaluation coming up so that will give town staff more information about future taxes. But Weinbrecht also said the town’s finances are efficient because of that staff.

“Our manager finds talented people and puts them in positions where they can thrive,” Weinbrecht said.

“Bonds are the most effective way for us to bring in money for projects,” Bush said. 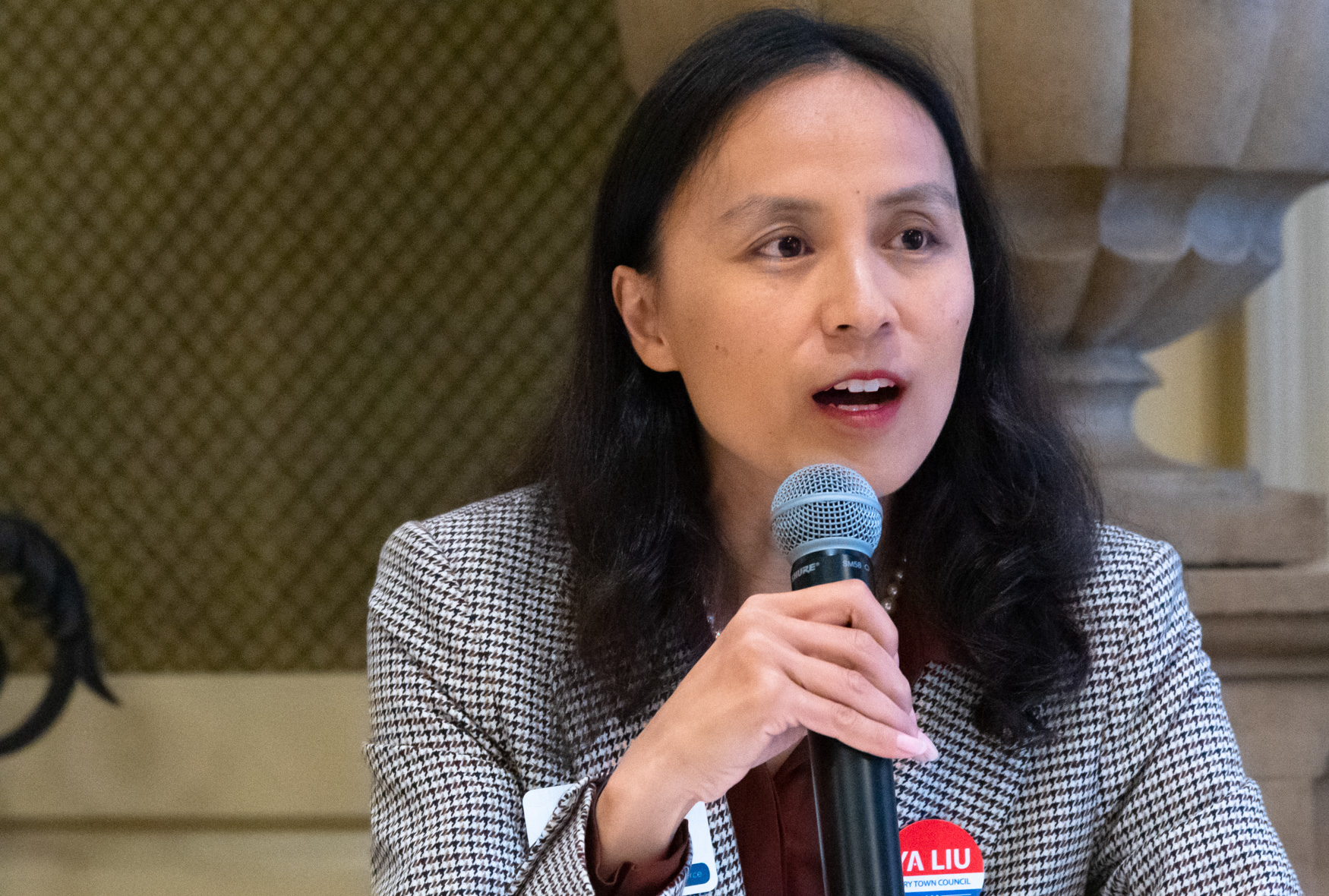 Cary’s Place in the Community

“Participate in the school board,” Liu said. “Get involved in non-profits.”

Friedrich said, as the Chamber gathers local businesses and interacts with local government, that’s an opportunity for the business community voice its concerns and needs.

“Maintaining this relationship is how we learn to better serve our business community,” Friedrich said.

George said one specific area where the Chamber helps is through the annual teacher awards and scholarships, encouraging not only more investment in these scholarships but more similar programs to give back to people who are working hard in the community.

“We can continue to have these things the Chamber proudly sponsors,” George said.

Weinbrecht said the key to having a relationship between government and business is open communication and sharing when one side has problems.

Candidates were also asked what Cary’s role is in the overall region. Frantz said Cary works to share resources with Morrisville, partners with Wake County for sports and has served as an example of how a municipal government can be non-partisan, all of which makes Cary not only known regionally but nationally.

Bush talked about Cary’s regional partnerships, including how the town provides water, sewer and now 911 services to surrounding municipalities. But Bush also highlighted how Cary is taking steps to spread itself nationwide, including currently through a partnership with North Carolina State University on 5G data.

“It really gives us a name outside of the community,” Bush said.

Weinbrecht said, as Wake County looks to double in population in 25 years, Cary’s quality of staff and services will not only be an example for others to follow but it will be Cary’s role to show other municipalities the way.

“We’ve been there, done that. That’s why we can help you,” Weinbrecht said.

George said all regional partnerships fit into the narrative of the rural-urban divide in North Carolina, and this serves as an opportunity to bridge that divide.

“We share our resources so they know we’re pulling for them as well,” George said.

Liu said Cary will need county and city governments’ help for challenges in the future, such as new schools and building transit projects.

For Friedrich, she said Cary is already a regional leader and that means being at the table in all big county and Triangle discussions.

“Cary needs to be there when businesses are recruited regionally, even if they aren’t coming here,” Friedrich said. 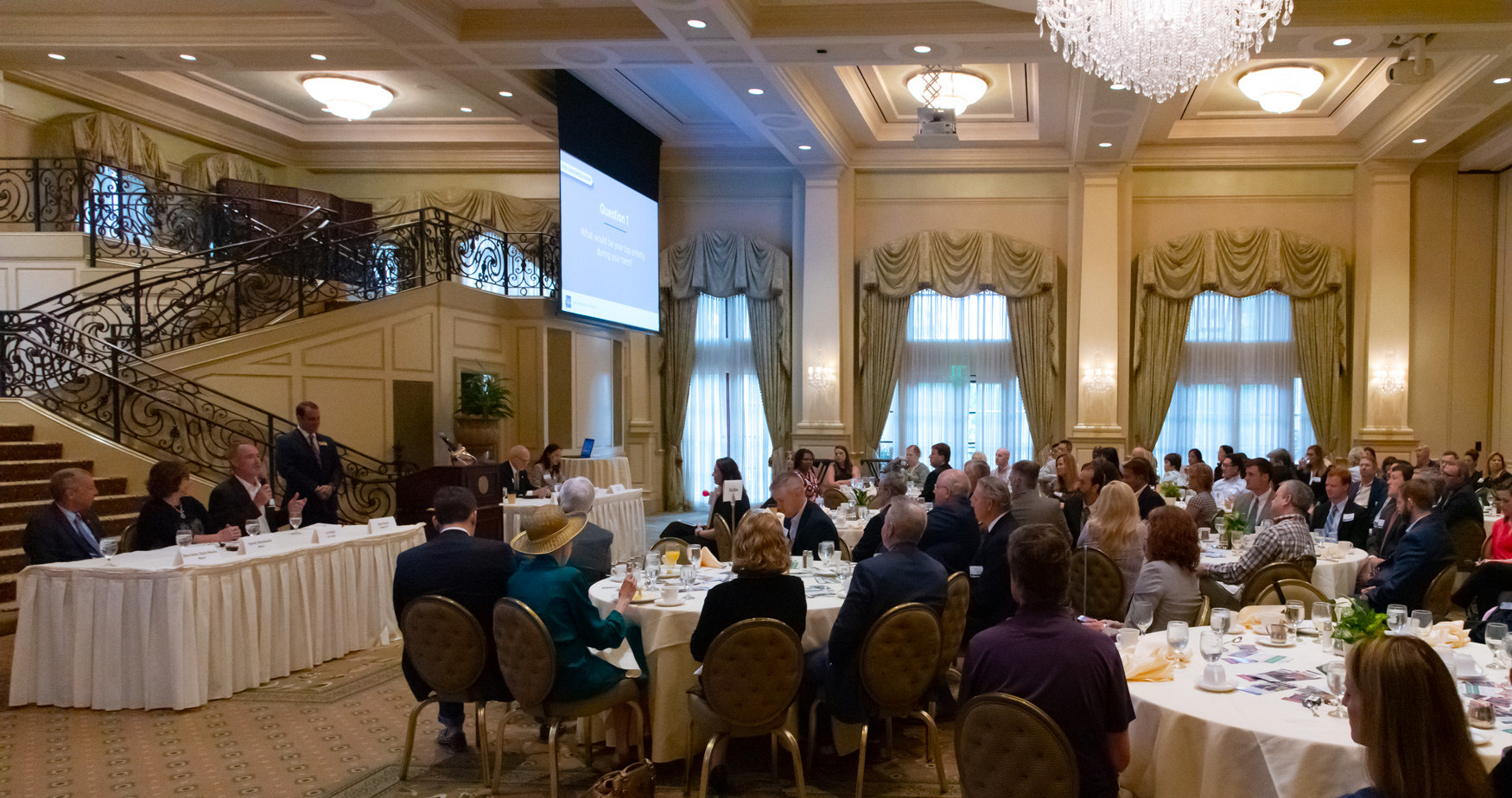 Money Matters: 401(k) Decisions – You Can Take It With You
Scroll to top
%d bloggers like this: