Cary, NC – The ice is heating up with the NHL season starting in a few days, but Carolina Hurricanes fans had a rough weekend, including a narrow loss during the Caniac Carnival.

The Carolina Hurricanes put a team on the ice that may look almost like the starting lineup on opening day while the Nashville Predators sported 11 players without any NHL experience, and the Preds still won 2-1 with just a minute or so left in the overtime period. Both coaches play a similar style, maybe no coincidence seeing as Rod Brind’Amour played for Peter Laviolette on the Canes 2006 Stanley Cup team. That game is fast with every player playing a 200-foot game.

The Canes won the opening faceoff and completely dominated the first few minutes with the puck constantly in the Preds’ zone but their shot selection was weak. One observation, there was no one camped out in front of the crease and most shots were from bad angles and none getting on net. Other observations: Sebastian Aho had a nice takeaway and Teutonic Teravainen’s tenacity in the corners led to a shot by Jordan Staal. Juuse Saros, the Preds’ goalie, played in mid season form and he, as well as Peter Mrazek, were both excellent. Both keepers were very selfish on rebounds and had quick hands.

Brock McGinn and Warren Foegle, who play similar styles, complimenting one another on the ice and appeared to have good chemistry. Neither is afraid to bang a body off the puck or dig hard along the boards, sometimes at a tandem tag team. One interesting factoid: Josh Wilkins on the Preds’ second line, played at Providence College for three years, is from Raleigh and was on the Junior Hurricanes growing up. He took a total of five shots and was the only Predator player that won over 50 percent of his faceoffs. Good luck to Josh. 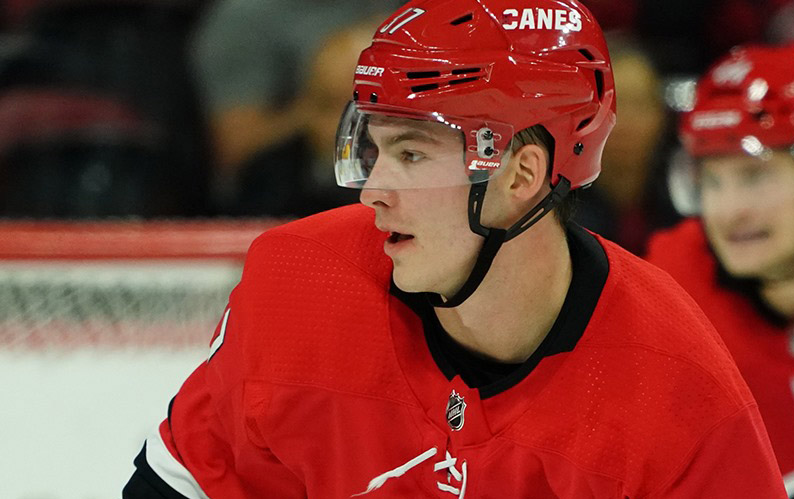 Jordan Staal wasted no time in the second to get on the scoreboard. Newcomer Joel Edmundson blocked a shot to Mrazek’s left. Turbo cleared the puck to Staal who, with Nino Niederreiter on his left rushed for a 2-on-1. Staal held the puck using El Niño as a decoy then left a wrister go into the far upper corner at just 19 seconds into the second for his first tally of the preseason.

Andrei Svechnikov seemed to pick up where he left off last season and got called for a hook. Svech led the Canes last season with something like 31 penalties but most were rookie mistakes that he told me directly “those were all on me” even when I believe some were tricky tack calls. During the “man down” situation, Jaccob Slavin had a fantastic stick check stealing the puck in the process. The frustrated Pred retaliated with a slash, resulting in a 4-on-4. Neither team scored but the shots at this point of the game were getting better only to have both goalies stonewall everything.

Preds Tie it in the Third, Win it in OT

James Reimer replaced Peter Mrazek in the third and started out as hot as Mrazek with a very quick glove and sliding side to side in good anticipation of off directional shots. The Canes were on the power play and had a new look with the “quarterback” being behind the net instead of up top. New look but same result as last year, not very effective. I suspect that’s one area Roddy will be personally spending more time on as that has to improve. I’m happy something new is being looked into but sooner or later, results have to happen.

The Preds’ Anthony Richard tied the game early in the third on a shot that Reimer would probably want back. Going into overtime, the Canes had a few chances but just couldn’t get an effective shot off. After a slow line change by the Canes, Ryan Johansen sped down the left wing putting one top shelf over Reimers left shoulder to win the game. Roddy has to be pleased with the speed and effort but obviously not the result.

Three players scored two goals a piece but the problem was two of them were on the Washington Capitals. T.J. Oshie and Jakob Vrana scored for the Caps while Sebastian Aho scored two for the Canes along with a solo goal by Nino Niederreiter. The game looked more like a late season regular game than a preseason game with both lineups sporting all or nearly all regular roster players. The game had it all going on with fast play, good referring, bad referring, great goaltending, slick goals, and one player possibly forgetting his meds before the game as he had another melt down.

Just before the game, in an interview with John Forslund, coach Rod Brind’Amour made the announcement that Jordan Staal would be the new Captain with Jaccob Slavin and Jordan Martinook as Alternate Captains. No surprises and great choices. Each have their own leadership qualities with all three giving their all on the ice. 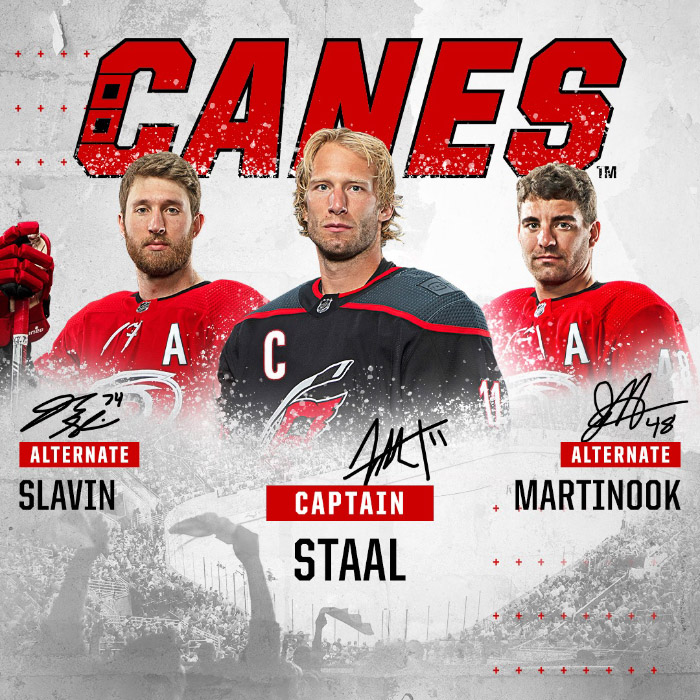 Andrei Svechnikov was attempting to pass the puck to Aho along the near boards when he ran into a brick wall with the wall collapsing to the ice but was still able to get the puck through. Aho picked up the puck and with a defender closing in let go a wicked wrister that went between Braden Holtby’s legs bouncing off his left pad into the net for the early Canes lead. With the game being a free gift from the Canes, the PNC Arena was more than full getting the nearly 19,000 to get loud. Nowhere near Playoff loud but great to hear the barn get noisy during a preseason game.

Julien Gauthier, the only Cane to play in all six preseason games, has a great shot to make the team. Early in the first he once again did a power move to the goal. He didn’t manage to get a quality shot off but the effort was there and if this six-foot-four-inches, 226-pound forward continues his efforts, success will come. Big change in this game from the last game is the Canes had traffic in front of the net. Svech is 200 pounds of pure muscle and dug in front of Holtby and appeared to enjoy having Cap defenders try to move him out. Oshie and Vrana potted goals midway in the period with Vrada getting his on a power play.

The game took a weird turn in the second as the Canes were uncharacteristicly called for penalty after penalty. First Teuvo Teravainen got called for interference in the offensive zone, but before the whistle blew, Shane Gersich made a run to Brock McGinn. Ginner put his hand up to thwart off Gersich but was called for a hit to the head with no offsetting call, giving the Caps a full two minutes of 5-on-3. The Canes’ defense was great but with just four seconds left, Oshie got a slick feed and put away an Ovechkin like bullet. Seconds after the penalties ended, Dougie Hamilton got called for slashing Tom Wilson. Before that penalty was up Aho got a weak call for a high stick against Wilson.

Midway in the period Rolan McKeown and Garnet Hathaway dropped the gloves. McKeown is trying to make the team and isn’t afraid or opposed to dropping the gloves if the situation calls for it. Late in the period, Wilson was holding Warren Foegle from getting on the bench during a change. Foegle tried to wiggle loose but Wilson kept being himself prompting a few of the Canes on the bench to start with the chirping. Then Wilson went too far, he challenged the entire Canes bench for a fight. Easy call for the refs: 10 minute game misconduct. With his history, it will be interesting if the NHL looks into this further, as it should.

The Canes came out in the third with obviously getting some direction from Roddy in between periods. The pace was faster on both sides and intensity by every skater. Roddy changed up some lines, putting Lucas Wallmark centering Ginner and El Niño. Wallmark won a faceoff in the Canes end of the neutral zone with Slavin sending it cross ice back into the far neutral zone. The defender had trouble handling the puck that allowed El Niño to swat the puck between the defenders legs and make a bee line into the Caps’ zone.

With Ginner as a decoy on the left wing, El Niño let a laser wrister go top shelf short side to close the score. About three minutes later, the Caps’ Vrana scored his second of the game on a missed defensive play by the Canes. Seabass got the Canes’ second power play of the preseason mid way in the period off a pass from Erik Haula. Haula actually was making a shot that slipped off his stick on a bad angle but fortunately went right to Aho who buried it giving the Canes and Caniac life. The last half of the third was scoreless but very exciting as both teams kept up the pressure and set the stage for their first regular season game next Sunday.

Season opens Thursday, October 4, 2019 against Montreal, the team that made the offer sheet to Aho. Very few tickets are still available. Be there! 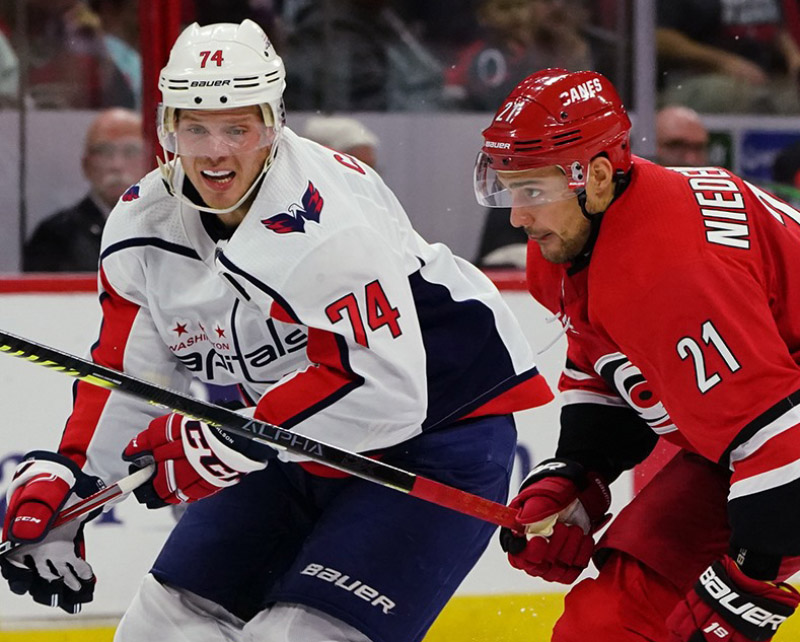 October 2019 Films at the Cary Theater