In a June 2019 Cary Town Council meeting, Town Council approved rezoning around Cary Regional Library and the new downtown parking deck to High Intensity Mixed Use. This will be Academy Park Cary, with two buildings for a mix of residential, commercial and office uses.

“The town acquired the entire block and this section around the library was not needed for the park,” said Ted Boyd, Cary’s director of economic development.

Building 1 will be primarily a mix of office and retail, while Building 2 will be residential, with a ground floor with retail and amenities for people living there, such as a gym, a leasing office, etc. 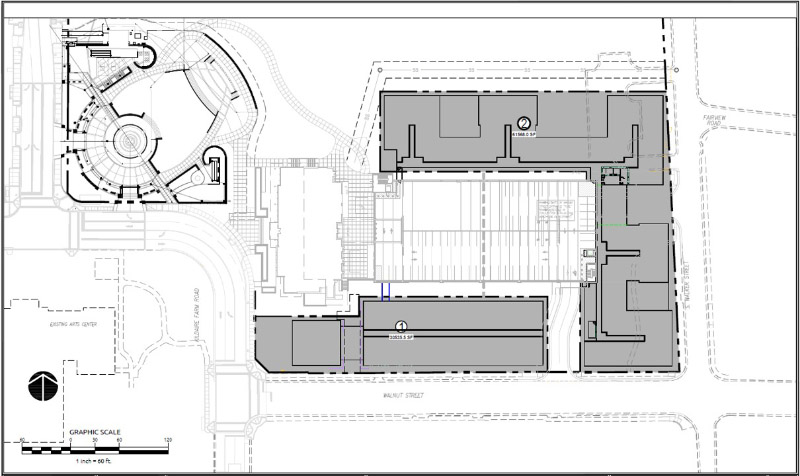 “There are bigger options on the corners for something like a restaurant or café,” Boyd said.

On the land in question, there is a descending slope from Kildaire Farm Road down to Walker Street, with a roughly 35 to 45 foot fall, so the two buildings are designed to match, with both buildings generally in line with the parking deck’s height. There are also open connections between the buildings for access to both Cary Regional Library and the parking deck.

“That’s why there’s a tunnel going into the deck currently. We’ll have the building going over it,” Boyd said. 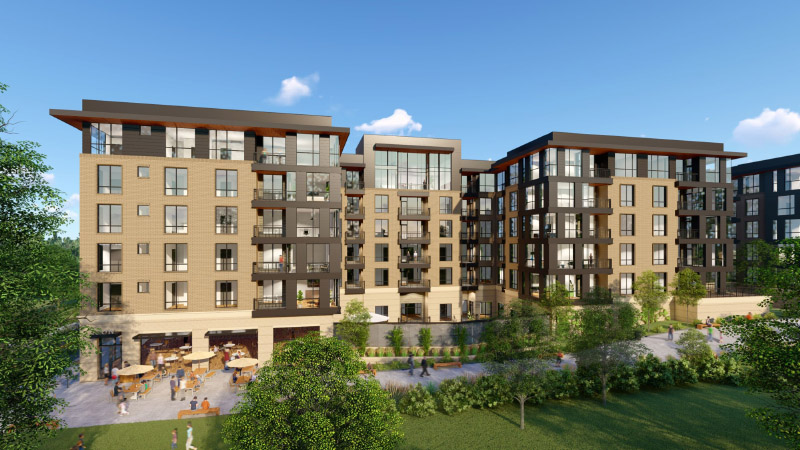 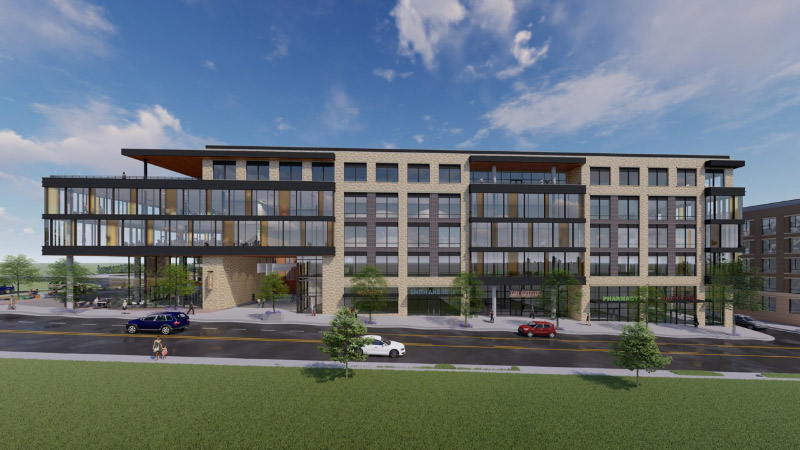 To develop Academy Park Cary, Boyd said the town is working with the Knier family, the Stephenson family and the Zahn family, with the buildings to then by appraised by a third party. Developers will also pay to get access to the parking deck.

There will be a Public Hearing on December 12 for the development agreement, and if approved, construction will start as early as next year.

As Boyd put it, working on Academy Park Cary is relatively easy because there is only one landowner: the Town of Cary. But on another major project in Downtown Cary, it is considerably more complicated because there are three owners.

This project on the block of land surrounded by W Chatham Street, S Academy Street and S Harrison Avenue has three pieces owned by the Town of Cary, First Baptist Church and the Jordan family’s Northwoods Associates. 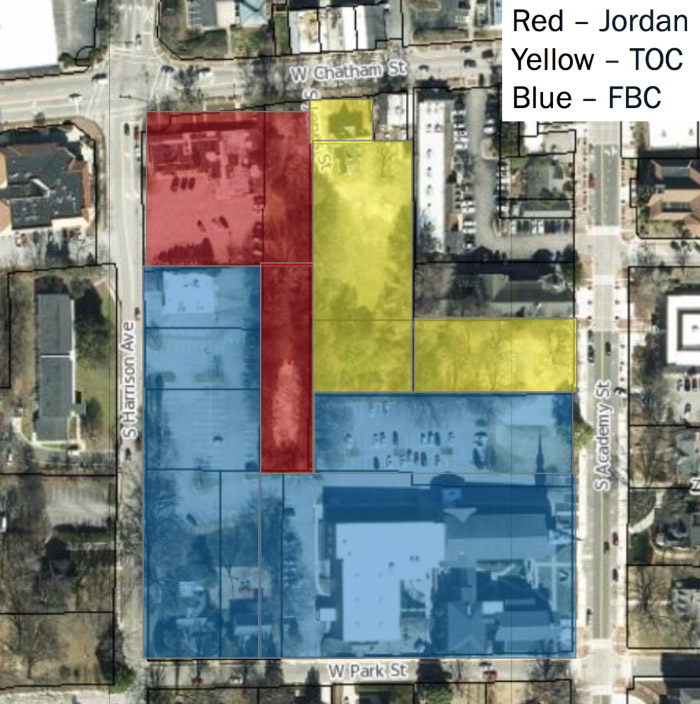 A map of the current landowners on this downtown block

Boyd said the objective now is to adjust and clean up the property lines for this upcoming project, with two commercial buildings, a multi-family building and a parking deck.

In this new outline, the western parking lot on First Baptist Church will be used for Northwoods’ apartment building, with the parking deck on Town of Cary land.

“It’s 466 spaces,” Boyd said of the parking deck. “244 will be sold the multi-family developers and the rest will be public spaces.” 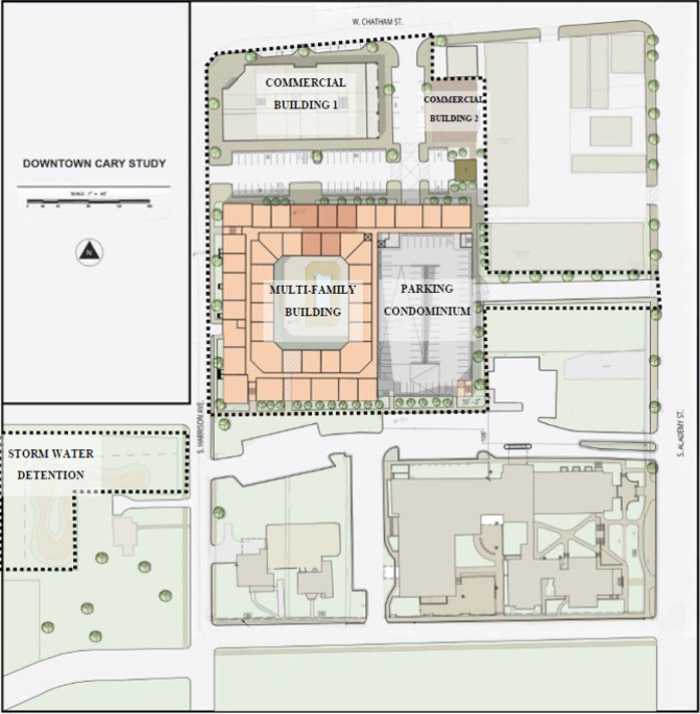 The layout for the Northwoods Associates property from the First Baptist Church land. The Town of Cary will also be building the stormwater retention on the West for the church

The apartment will have 190 class A multi-family units, screening the parking deck on the W Chatham Street and S Harrison Avenue sides. As for the commercial buildings, Building 1 will have 75,000 square feet of class A office space and ground floor retail. Building 2 is 10,000 square feet of food and beverage space.

On the strip of town land on the eastern side, there will be an entry road to the parking deck, which will be sold to the developers for access. Also, Jones Street connecting W Chatham Street to the commercial properties will be turned into a “proper street” as Boyd called it, since it is currently gravel. 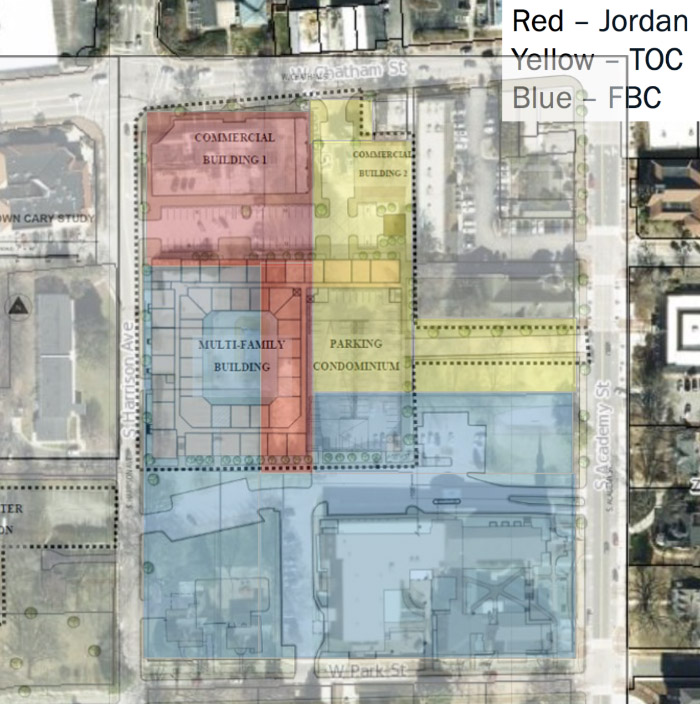 The two maps combined, showing how the property lines would change

“Its main historic context is its architecture,” Boyd said. “If moved, the new site would need similar prominence somewhere in Downtown Cary.”

This particular project has been in the works for close to a decade, with few details changing since work sessions in 2016.

“Lots of time and energy goes into managing the land and transactions,” Boyd said. “It’s a detailed agreement, with everyone trying to think through it.”

The first Public Notice for this project takes place on Friday, November 1, with the first Public Hearing on Thursday, November 21, 2019. The congregation of First Baptist Church will also need to vote on this proposal, with that vote taking place in either December 2019 or January 2020.