Cary, NC – The Carolina Hurricanes fell to the Florida Panthers 4-2 before nearly a sellout crowd after they just returned from their best five-game road trip in franchise history. The Canes garnered nine out of a possible 10 points on a trip through western Canada ending up in Colorado.

The only blemish was a 1-0 loss in overtime against Vancouver while piling up a total of 19 goals and yielding eight on the roughly 7,500 mile road trip that did not have two games in a row played in the same time zone. The Canes had all the stars lined up for their first win at home in two weeks: the Panthers played a home game the night before, the Canes already beat the Cats in their first two meetings with Sergei Bobrovsky, one of the best goaltenders in net both games, the Panthers had rookie back up Chris Driedger in net for only his third NHL game, sharpshooter Eric Haula was back in the lineup after missing the last 17 games and Petr Mrazek was in goal who has been excellent at home.

Despite all that mojo, the Canes once again lost to an Eastern conference team below them in the standings. Just goes to prove, every game requires everyone’s A game. 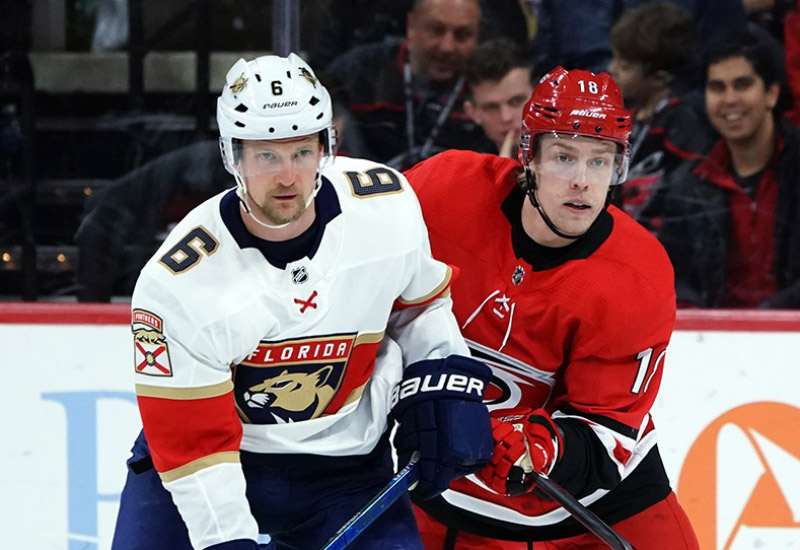 It was clear from the onset of the game the Canes’ game plan was to toss any and everything they could at the rookie goalie. By the end of the period, the Canes attempted 28 total shots, with 12 going on net, whereas the Panthers were able to muster only 14 total shots with nine on net. But, where it counts, one of those went past Mrazek.

The Canes’ forechecking all game was not up to their, or really coach Rod Brind’Amour’s, usual standards, with the Canes getting caught along the boards all too often and losing the battles in the neutral zone. Anytime the Canes penetrated the Cats’ zone, they did their best to get off at least one shot. Give Cats coach Joel Quennevile credit as he had his defense collapse around the crease very effectively anytime a shot was made. More than one Cat player paid the price for blocking a shot with their body.

Just over the seven minute mark, Jake Gardiner was on the left point and switched his option of a shot to a pass midway in his release resulting on a flubbed release right onto the stick of Brian Boyle. Boyle saw Evgeni Dadonov start to take off at his own blue line sending a headman pass right on the stick, Gardiner couldn’t catch Dadonov who was able to put it past Mrazek for an early 1-0 Panther lead. The Canes dug a little deeper after that goal but were being out hit all too often and still weren’t able to send any high percentage shots on net.

The second period for the Canes was very similar to the first with the Canes out shooting the Cats but still were not able to get one by the rookie netminder. The Canes came off their game a little as play was getting a little chippy. Andrei Svechnikov had a legitimate, but unintentional, high stick penalty. The Canes’ penalty kill units have been one of the best in the league lately and almost killed off this penalty but big man Brian Boyle, after passing up to the point while he was along the boards made his way to the dirty area of the crease using his six-foot-six-inches, 245-pound frame to block Mrazek from seeing the puck. Aaron Ekblad sent a hard shot from the left point with the puck hitting Boyle’s knee then going in the net as Mrazek had no chance.

Late in the period, Svech got called for a questionable high stick, with his stick going high on Brett Connolly on a follow through on a pass. Joel Edmundson may have thought Connolly was going for an Academy Award as while the stick was close, it doesn’t appeared to have made any contact with Connolly looking like he was in a fight in a Batman movie. Josh Brown came over to shove Edmundson – only words were exchanged – and Svech did a bad move by turning around towards the ruckus after skating towards the net with Connolly, saying something to Svech which probably wasn’t Merry Christmas. After the refs got together there were four penalties for unsportsmanlike conduct and the initial high sticking penalty.

Niederreiter, Wallmark Get Canes On The Board

Early in the third, with the penalty boxes full of players from the skirmish late in the second, the Panthers scored their second powerplay goal, putting the Canes in a deep 3-0 hole. What didn’t make sense and no official word is after the goal, Ryan Dzingel, serving the high sticking penalty for Svech was released but later after Edmundson and the Cats were released from the box, Svech had to remain. The Caniacs felt the refs were missing a pretty good game and as one fan said about a certain referee, only his mother thinks he’s the best ref in the league. Everyone has good and bad games but it did appear a few easy calls against the Cats were missed.

The Canes finally broke the ice just under the midway point of the period. Dougie Hamilton had the puck on the right point taking a hard slap shot that was blocked by the defense. Teuvo Teravainen picked up the loose change, skated to his left then shot into what appeared to be a wide open net but just as he was about to shoot, Nino Niederreiter got cross checked onto the ice and, while laying face down, the puck Turbo sent along the ice hit El Nino’s stick and popped high into the net.

Fewer than 90 seconds later, the Canes got caught flat footed when Noel Acciari scored on a goal Mrazek would want back, for Acciari’s seventh goal in his last three games. Lucas Wallmark scored a pretty powerplay goal to close the gap to the final of 4-2. Disappointing for the home crowd that was expecting more especially after the successful road trip.

The Canes have an away matinee game in a Toronto on Monday, December 23, 2019, then the mandatory holiday break with the next home game on Saturday, December 28, 2019 against the high flying Washington Capitals with Alex Ovechkin and TJ Oshie. Be there!

If anyone is interested in the Saturday, January 11, 2020 “Hartford Whaler Night’’ game against the Kings, let me know as there’s a group going that night – bfennel11@yahoo.com