Raleigh, NC — Mistakes happen in every game throughout the year but they hurt more when in the thick of vying for a playoff spot.

Also adding salt to the wound, all of the teams the Canes are huddled with for the Wild Card spots lost their games, meaning a win would have vaulted the Canes to a better position. The Canes are still in a decent position as they still have 3 games at hand with Columbus who are just above the Canes.

Home cooking is normally a good thing but this 3-2 loss to a very good Colorado Avalanche team was the Canes 3rd home loss in a row. The Canes now embark with their second-longest road trip of the season, 6 games, starting with a game against Montreal Saturday, Feb. 29. 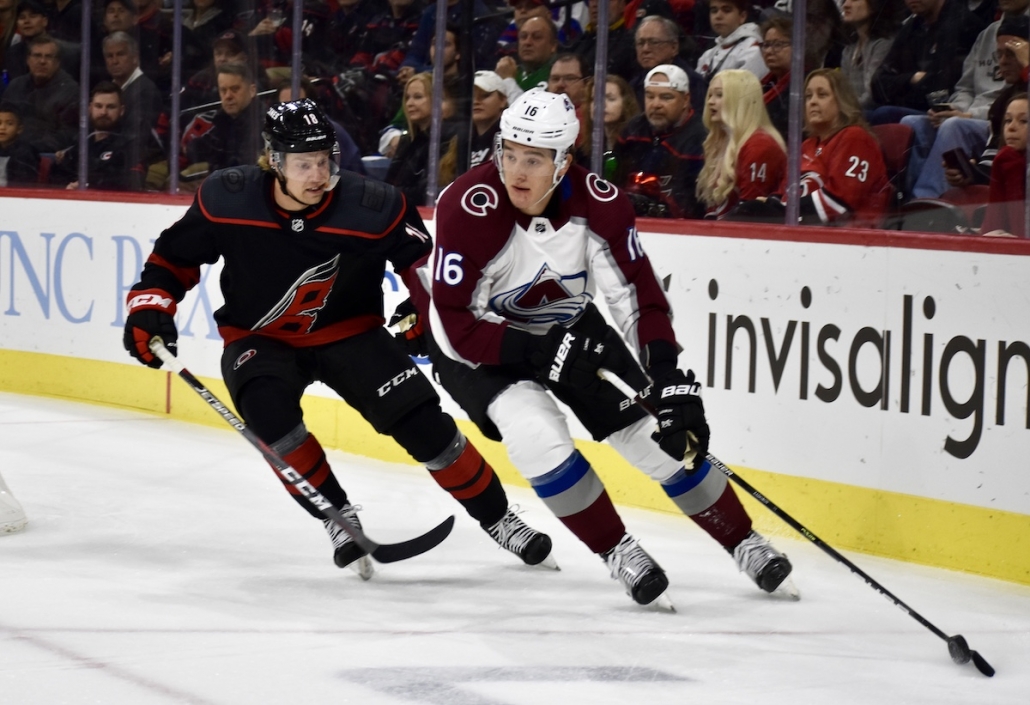 Ryan Dzingle chases down the puck, a stride behind Avalanche defenseman Nikita Zadorov.

Colorado is one of the strongest teams in the west. They are as big as they are fast and they have Pavel Francouz in goal who is having a career year.

The Canes keeper, Anton Forsberg was making his debut with the Canes as he and Alex Nedeljkovic were called up with both Petr Mrazek and James Reimer out with injuries. Forsberg has played 45 NHL games with Chicago and Nashville, having played his last NHL game in 2018.

Rod Brind’Amour had the team ready for the game as the Canes started ‘on time’ from winning the opening faceoff then having the first two shifts keep the puck in the Avs zone. Jordan Martinook got the game’s first penalty with an innocent and inadvertent high stick. Marty has been playing excellent hockey since his return off the injured list and being on the penalty kill forced Roddy to use newcomer Vincent Trocheck on the man-down defense.

Jaccob Slavin continues to play his patented non-flashy, unbelievably great defense and was the lone defender on a 4-on-1, timing his stick check at the perfect time to break the play. The following play, Slavs made a great steal off Valeri Nichushkin, gained control of the puck then started a rush up ice.

The Avs’ Tyson Jost scored at the 6:34 mark of the first when Jake Gardiner lost his footing at the blue line and was twisting and turning, ultimately allowing Jost to go past him to the goal. This left Trevor van Riemsdyk as the lone defender with Matt Nieto joining on the left. Jost used Nieto as the decoy all the way and beat Forsberg for the early goal.

This first mistake resulted in the Avs first goal.

Slavs made another steal in his own end, carried the puck through the neutral zone and passed over to Nino Niederreiter. Nino had a good looking one-timer but Francouz made an excellent blocker save. Late in the period, Gardiner and Ryan Dzingel both had great defensive positions on their men in the crease allowing Forsberg a routine glove save off a hard shot from potential rookie of the year, Cale Makar.

On his next shift, Dzingel got crunched into the boards on what appeared to be a boarding penalty but the ref just 6’ away thought differently. DZ had to be helped off the ice as he was in obvious pain and replays showed his leg twisting like a rubber band. 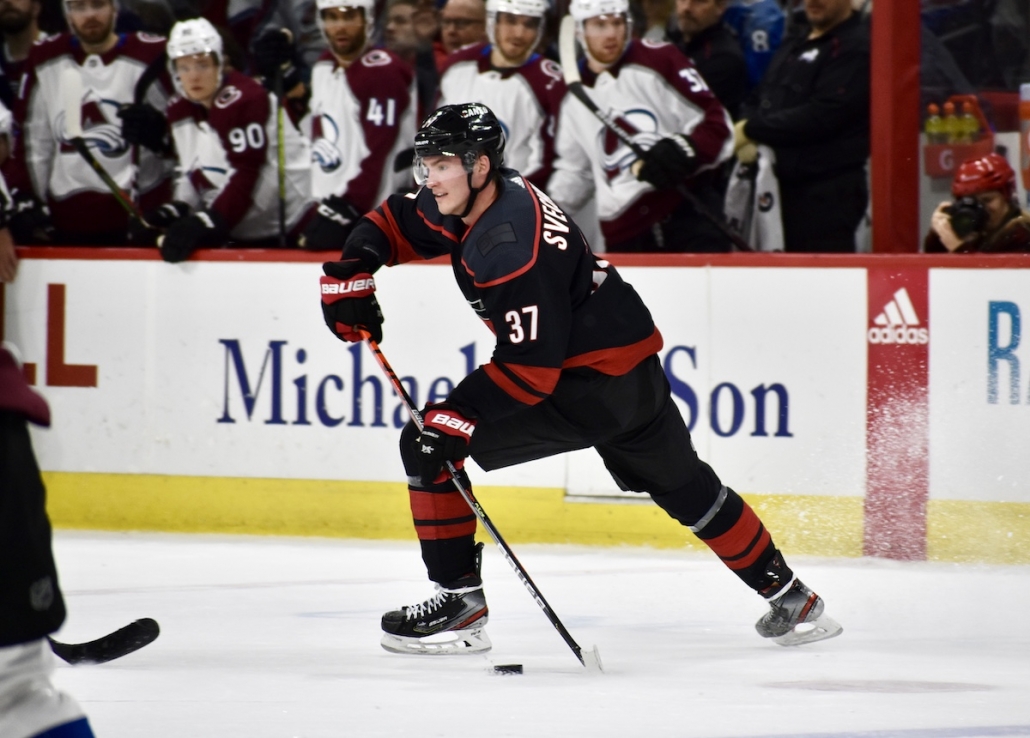 Andrei Svechnikov, the 19-year-old Canes right-wing, winds up for a shot.

Andrei Svechnikov continues to improve and gain confidence with every game. At the start of the second, Svech got the puck in the neutral zone along the far boards, sped past his defender taking a shot short side but Francouz made a good pad save. Surprisingly, DZ was back on the ice in the second, not showing any effects of the hit into the boards, albeit maybe a stride slower.

The Canes went on the powerplay early in the second without a score, but both units controlled the puck well and got off 4 shots.

A big improvement over the previous game on the execution but the same result — no goal.

Svech had a great opportunity during the powerplay that he knew was a lost goal and slammed his stick flat along the boards in frustration. Frustrated in not scoring is a good thing.

Midway in the period, newcomer Brady Skjei carried the puck through all 3 zones, showing his excellent skating skills making a pretty pass to Martinook for a tip-in, but the deflection went wide by inches. In the 13th minute of play, Haydn Fleury won a battle along the far boards getting the puck up to Svechnikov. Svech was rushing to clear the puck, didn’t get the lift he was attempting and instead put the puck onto Makar’s stick.

Makar passed over to Jost who went 5 hole on Forsberg for his second goal of the game. Second mistake, second Avs goal. Slavin once again stopped a potentially high scoring chance on a great stick check late in the period that could have been game over if the Avs converted for a third goal. Slavs is still showing why he was chosen as the Canes All-Star after Hamilton broke his leg. 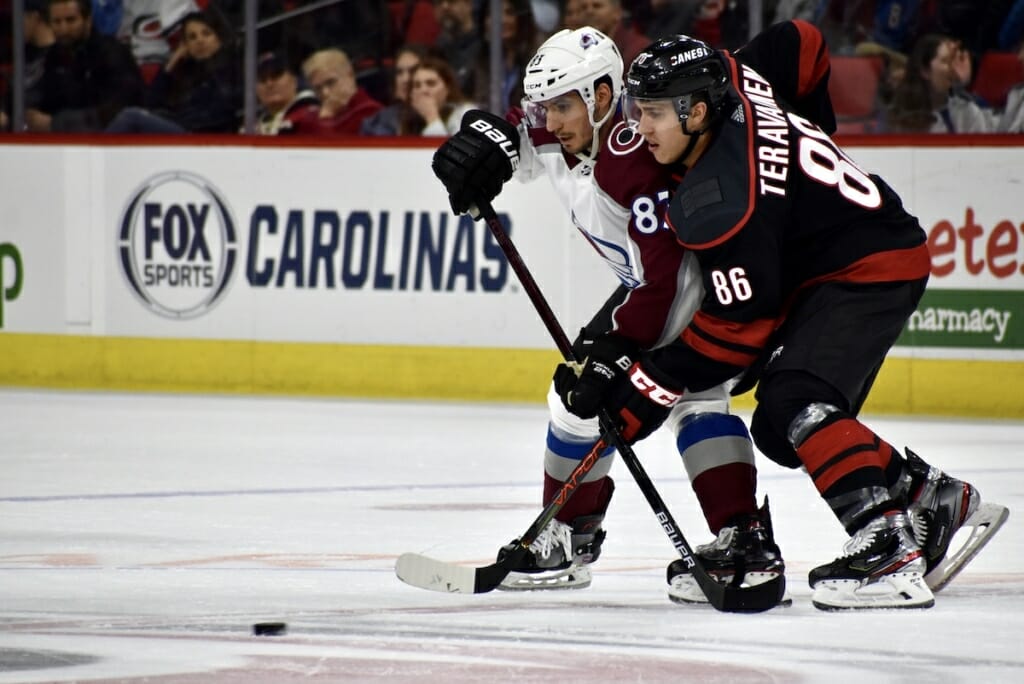 The Canes got what they needed in the third period with an early goal by Turbo Teravainen. Svech had the puck in the near corner taking a low percentage shot short side. The puck got deflected, hitting the far boards. Skjei touched the puck over to Sebastian Aho in the high slot, who turned to realize he didn’t have a shot. Aho passed over to Turbo along the far half board where he sent a hard one-timer to the net with Svech creating havoc in front of the net.

Francouz made the initial save but the puck was blocked up high, came down and with Svech and Ian Cole jostling in the crease, puck luck for the Canes happened when the puck landed on the ice with the spin in the direction of the goal. Turbo gets the goal but it doesn’t happen without Svech fighting for position in the crease.

Turbo got his second of the game on his next shift, getting the Canes and Caniacs back into the game.

Seabass got the puck along the far boards in his end, passed up to Turbo just inside of the blue line in the neutral zone. Turbo took 3 strides into the Avs end and sent a laser between the legs of Francouz to tie the game. It sort of makes up for earlier in the game when Turbo had the puck in the mid slot with a clear shot but instead passed over to Seabass below the far faceoff circle for a low percentage shot, something that maybe Roddy addressed between periods.

Late in the period, with the puck along the near boards in the Canes end, all 5 Canes skaters were in on the battle for the puck. Gabriel Landeskog got the puck from the scrum, passed far side to a lonely Samuel Girard who slammed home the game-winner. Five skaters along the boards is a mistake and cost the Canes another goal. A tough loss that the Canes have to learn from.

Nothing better than a quick game which they’ll have Saturday night in Montreal. Next home game is March 14th against Pittsburgh. Be There!