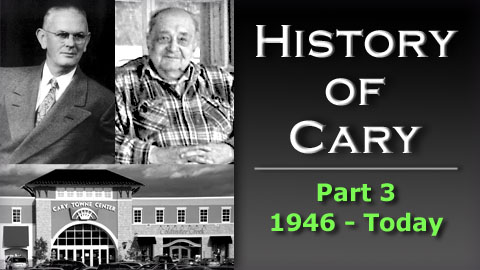 Cary, NC –  The half-century after World War Two saw a gathering steamroller of growth in Cary – residential, commercial and recreational.

The Fifties and Sixties

Charles Evans bought land in Cary in the 1800s, and his son Clyde bought more. In the 1950s, Clyde sold parcels to other black families when nobody else would all along Evans Road (named for the family). Clyde’s grandsons later developed Evans Estates.

In 1957, Ralph and Daphne Ashworth bought Henry Adams’ drugstore. Their son Paul still runs it today and Ralph works for him. They also opened a string of Hallmark card shops.

The first supermarket in Cary opened up in June of 1950. It was a Piggly-Wiggly at the corner of Chatham and Academy.

In 1960, a new Cary High School was built on Walnut Street. It was the first school in Wake County to be desegregated in 1963 and became a model for other schools to follow across the South.

The development of Kildare Farms as a residential community was a signature event in the 1970’s. It was Cary’s first planned unit development (PUD), dwarfing the scope of anything that had come before it. Iits original plan called for 2,950 families.

The first Lazy Daze Festival was on August 24, 1977. The first organizer was our good friend Jerry Miller. 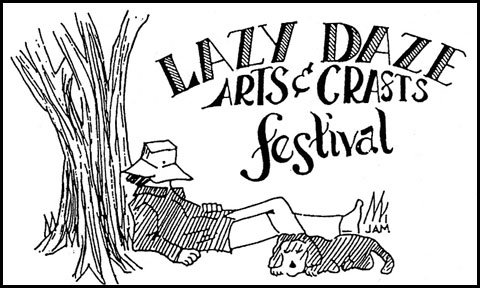 The 1980’s saw Cary’s first Industrial Performance Districts (IPD). MacGregor Park, Weston and Regency all came online in the 1980’s, employing thousands of people and bringing an industrial tax base to the town.

Born out of NCSU, SAS Institute, with its many popular business software products, became Cary’s largest employer in 1980. It is one of the largest technology companies in the world and a perennial leader on “best of” lists.

The Cary Water Treatment facility on Jordan Lake opened in 1993.

Preston, which had been envisioned in the 1980’s, became a success when Dr. James Goodnight, CEO of SAS, took the project under his wing. It became the town’s largest development in acreage and included the largest golf course in the Triangle.

Along with other retail developments in town, they increased retails sales in Cary from $15 million in 1972 to $540 million in 1992.

A Sense of History

The Page-Walker Hotel was restored by 1995 to become Cary’s cultural arts and history center. The Cary Heritage Museum on the third floor opened in 2000. 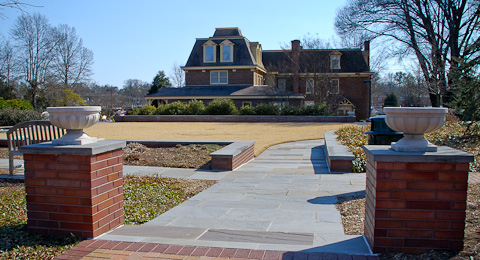 The Scope of Change