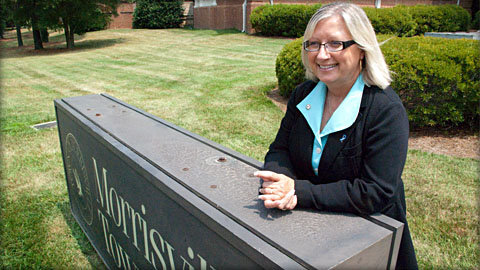 We were greeted warmly by Mayor Holcombe in Morrisville’s beautiful Council Chambers on Thursday of last week.

“I ran for Mayor of Morrisville simply because I thought I could help.  I feel like I am a problem solver, and a good listener. I believed that Morrisville had challenges, but not insurmountable ones. But we are kind of at a crossroads. We had the opportunity in front of us to become innovative leaders, but at the same time act as one body coming to a consensus to make decisions that were in the best interest of this town.”

Jackie went to the University of Florida (College of Engineering), where she also met her husband, Rick – a chemical engineering student at the time. They were soon married and moved around the south.

In 1989 they left Jacksonville, Florida for Cary for Rick’s job at Reichhold Inc. The White Plains, NY-based company had relocated their corporate HQ to Research Triangle Park.

The Holcombes spent 13 years in Cary, then moved to Morrisville 8 years ago. “Morrisville was closer to RTP, it had a small town feel, and we found a home with space that could be converted to an apartment for our daughter with special needs,” she told us.

They have two children: Lindsay and Kristin.  Kristin lives in Asheville.

Jackie Holcombe was involved in the Town of Cary while she lived here.  She held a small role in Mayor Glenn Lang’s (1999-2003) successful bid to become Mayor of Cary. She got involved “in a small way” in Cary politics and “was fascinated by it and interested in it”.

After they had become residents of Morrisville, in 2005, she ran unopposed for a Town Council slot.  Jackie ultimately was forced to resign from the Morrisville Town Council as a result of some health problems.

“Little by little, as I recovered, I got more and more involved in what was happening in Morrisville. Some folks were glad to see me in Town Hall, some…not so much,” she told us laughing.

Ms. Holcombe then became a member of the committee working on the Land Use and Transportation Plan in 2008. She had concerns about the way growth was happening and believed that infrastructure needed to exist to support growth – and that the town needed to increase its focus on careful planning.

Meanwhile, her children were getting older and becoming self-reliant. In 2009, with the support of her husband Rick, she ran for Mayor and won with 62% of the vote. “We knocked on a lot of doors, pretty much every one. A lot of people helped, but Rick was amazing. Every day during the campaign he asked me what he could do to help that day.”

Today, she works “crazy hours” and is tackling the issues she discussed while on the campaign trail – sepecially transportation, long term financial health and responsive government.

“Together we need to define the direction for Morrisville,” she said. “I want the Town of Morrisville to be a place where a wide range of people are comfortable to call it home.  You know, young families, seniors, diverse cultures. A lot of people don’t know this but Morrisville is the only Wake county municipality to issue more single family residential permits in 2009 than in 2008.”

At the same time, she says, the town needs to be frugal with its budgeting processes, avoid raising taxes and ensure that adequate infrastructure (such as traffic controls) accompanies growth.  On Tuesday, July 13, the Council will vote on the Town Center Code.

Her vision is that Morrisville will one day have a more enhanced “center of town” – with a community gathering space, a cultural arts center and small shops and restaurants.  “I am also working with Jan Faulkner (Morrisville’s previous Mayor) and others on the creation of a philanthropic organization called ‘The Morrisville Community Foundation,'” she told us.

The Mayor said, “Tuesday we expect to pass our plan for Town Center Zoning Plan.  We will strive to become more aesthetically pleasing, to have sensitivity toward our environment and give defintion to downtown Morrisville without raising property taxes.”

Jackie owns a buckwheat hull business called It’s Lagniappe where she sells the hulls in 2 pound, 10 pound and 18 pound packages.  She came on it quite by accident.

She had made a pillow as a gift using the hulls for a friend in 2004. The hulls are used to make meditation pillows and the like. She sold the leftover buckwheat hulls on eBay and in the process found a niche market. She then created “an accidental business”. This then became a means to provide part time employment (a few hours a week) for her daughter Lindsay and Lindsay’s peers.

Jackie also contacted N.C. State to see if they could come up with a way to automate the packaging. “Did you try using a scoop?,” was the first question she was asked by the Mechanical Engineering Department. “Uh yes, we tried that,” Jackie replied, laughing.  Eventually it became a senior design class project and the State students put together a low-tech packaging system using a workshop vacuum cleaner.

Lindsay and her friends do the work of packaging the hulls in the Holcombe home.

“Yes we’re good neighbors. Mayor (Harold) Weinbrecht and I talk. I knew Harold and Belinda years ago when our kids went to preschool together”. They talk about budgets and land use and transportation issues. They formally meet at the monthly Wake County Mayor’s Meeting. Next month they are going to catch a Mudcats game together.

“I’m a mom, wife, mayor, disability rights advocate and facilitator of www.BuckwheatHull.com. But this… isn’t about me. It’s about the 10 square miles affectionately known as “The Heart of the Triangle.” That quote is from the Mayor’s blog. Quintessential Jackie.

News on CaryCitizen is sponsored by YMCA of the Triangle