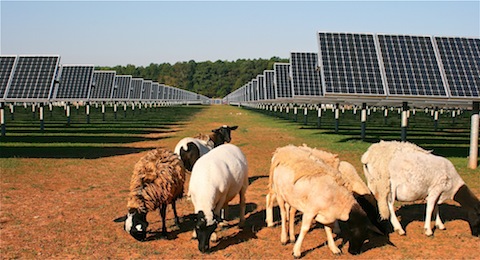 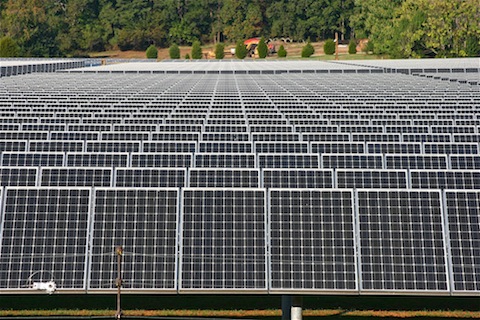 Story and photos by Leslie Huffman

Cary, NC – Everyone in town knows at least one person who works for SAS Institute here in Cary. The company has won many awards for it’s innovative technology and family friendly work environment.

But SAS Institute is also changing the environment with the production of clean, renewable energy for our community. I was invited this week for a tour.

Solar Farm 2 is situated on the Cary campus next to the original SAS solar farm system, completed in December 2008.

The new facility is made up of 5,236 ground-mounted photovoltaic panels covering around 7 acres. It incorporates a Ray Tracker tracking system, designed by groSolar, that rotates the panels as the sun moves in the sky. This movement increases energy capture by up to 25 percent over the fixed panel systems and also reduces the acreage needed for construction.

Photovoltaic (PV) solar systems convert sunlight directly to electricity. They work any time the sun is shining, but more electricity is produced when the sunlight is more intense and strikes the panels directly. PV allows the production of electricity without noise or air pollution, from a clean and renewable resource. Solar Farm 2 was installed by FLS Energy, Inc.

SAS builds this solar farm, what does it mean for us?

That means that 3,500 tons a year of carbon dioxide emissions are removed from the air. It is the energy equivalent of 367,000 gallons of gasoline. It’s enough power to run 325 homes for a year.

The impact on our local economy has been beneficial as well. During the planning, construction and operation of the solar farms local electricians, engineers, mechanical contractors and supervisors have been employed. 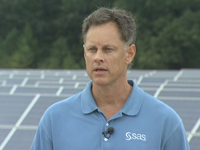 “The solar farm is a smart decision for SAS and for the community,” said Williams. “Projects like our solar farm demonstrate a fundamental shift in the value placed on energy efficiency, intelligent power sourcing and end-user consumption.”

“The development and implementation of alternative sources of energy is important for our environment, a stimulus for our economy and a step in the right direction to achieving energy independence.”

With one of the largest solar farms in the southeast, SAS is leading the way for other large companies to follow suit. With tax incentives and the ability to generate income a solar farm venture is a smart move toward a cleaner future.

Jerry Williams tells me that SAS should earn back it’s investment in approximately 10 years or less.

What About The Eight Sheep?

So why is this facility called a farm anyway? Solar Farm 1 is built on 5 acres and Solar Farm 2 on 7 acres of farmland. The Solar Farms are farming power from the sun.

And then there is the sheep.

Home to 8 sheep, the 12 acres are professionally manicured by the ewe. Grass is grown between all the panels which keeps dust to a minimum. Instead of using gasoline powered, noisy lawn mowers weaving in and out of expensive solar panels, this sustainable farm uses the natural ability of the sheep.

They keep the grass and weeds low and provide their own fertilizer to ensure healthy, continual growth.

I must say that the sight of the sheep wondering around the solar farm seemed like a visual contradiction. 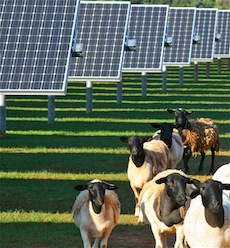 But, sustainability is just that. A mixture of old ways and new, simplicity and technology.

A Short Drive From Cary: The New Napa?
Scroll to top