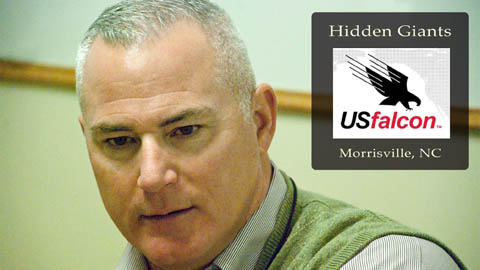 Morrisville, NC – Over in Morrisville, just behind Perimeter Park, is the headquarters for a company that deploys over 500 employees to all the world’s hot spots, including Korea, Iraq and Afghanistan. They perform work for the US Army and industries supporting our nation’s defense, including aerospace and national security. They’re on track to generate $115 million in revenue next year.

The company is called USfalcon. Never heard of them? That’s why they’re the subject of this installment of Hidden Giants.

A Family Business Grows to Over $100 Million

Peter von Jess, CEO of USfalcon, was returning from Afghanistan himself, when his father asked him to help his sister Jennifer, whose company needed some firm guidance.

Von Jess had an extensive background in the military, having retired as a full colonel. Tours of duty included Croatia and Bosnia-Hercegovina in 1997-98 as an Army reservist. He also has a masters in Applied Management which led to a successful career with General Dynamics and Computer Science Corp (CSC) in New Jersey. At CSC he was in charge of business development, and helped grow that company from $49 million to $155 million.

USfalcon, originally called Mill City Connections, Inc.,  was based in Lowell, Mass. Formed in 1999, they were able to take advantage of the new Historically Underused Business (HUB) area designation- in fact they still have an office in that original HUB zone.

Mill City’s primary business was selling office IT equipment, and was doing well for the first several years. Computer equipment constantly needs updating. Mill City had several banner years as companies geared up for Y2K through 2001. But by 2003 revenue was down and the company needed help.

What Pete quickly realized was that the company was too heavily focused on selling low-margin electronic goods and needed to shift their focus to value added professional services. This shift enabled them to focus on the higher margins of labor with some product support. Pete took charge on January 1st, 2003.

In 2005, Mill City worked on a large military project bid that was awarded in March 2006 for $19 Billion (that’s right, with a B). This fueled enormous revenue and staffing growth for the firm.  It was at this time that the company changed its name to USfalcon.

They started with a small staff (in fact Peter’s ID badge lists him as employee number 13 and sister Jennifer wears #1). There are now a total of 520 employees located around the globe.

Company revenue began to take off from a low of $3.5 million and negative cash flow in 2002 to over $103 million through this recession. In fact, during these tough times they have actually managed to grow and expect next year to hit a target of $115 million.

USfalcon provides IT services largely for the government defense department.  They provide logistical support for the technology in use today by the military. Or as they put it:  “offer in-theater operational mission support expertise”.

The personal military experience is directly speaking to the leadership team’s distinctive military careers. Until recently, USfalcon was providing service for just the Army, but have added the aerospace and security departments. Core areas of expertise include:

Pete is quick to point out that the business is “blood family started, but the family is those here now.” He goes to great lengths to make his employees happy including stock ownership, a gift of up to 10% of the company’s stock has been granted to the employee stock plan, in which employees are vested after 3 years as a loyalty bonus.

Generous in the Community

US Falcon also treats the larger community as an extension of their family.

US Falcon works hard to be a good employer and a good community citizen – and for that they have received numerous awards. USfalcon’s Senior VP, Robert “Skip” Eskridge, has known von Jess since their days together at General Dynamics. As Pete’s right hand man, Skip is tasked with keeping official track of accolades and corporate giving. He handed me a long list of their current awards.

It’s easy to miss USfalcon as you whiz past exit 284 on I-40. But there is no mistaking their global influence.

From supporting the military around the world to supporting employees and the community here in the Triangle, USfalcon is a leader and a Hidden Giant!