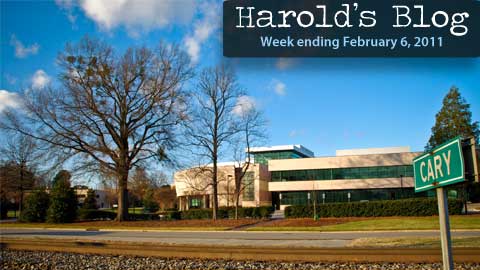 From the blog of Cary Mayor Harold Weinbrecht, covering the week through February 6, 2011. Photo by Hal Goodtree.

Town Government for Second Graders: “What if the Mayor Goes to Jail?”

On Monday morning, I traveled to Farmington Woods to speak with about 100 second graders. The teachers had asked me to talk about my role as a mayor and then answer questions.

Of course, trying to simplify local government to second graders was nearly impossible. I felt just about everything I said was way over their heads. So I stopped after about 5 minutes and answered questions for about 45 minutes which was a lot of fun. I was impressed that they all seemed to have put thought into questions.

The best question of the day was one I couldn’t answer: “If you get thrown in jail how can someone get you out of being mayor?” Wow! I don’t know. There might not be anything in the charter that answers that. It might be a situation where I can stay in office until my term runs out even if I were a convicted felon. I have asked the staff to look into an answer to that question.

Anyway, there were a lot of interesting questions and some were very cute. There were about half a dozen classes in attendance. After I was done, all the classes left except Ms. Milantoni’s class (the one that invited me). I posed for pictures with them.

Later Monday morning, I was interviewed by the Independent Weekly on the Western Wastewater Treatment Management Facilities and how it impacts Chatham County. The questions asked included anything and everything about that facility; I obliged and provided what information I could. Here are some of the relevant points related to this issue:

The article came out later in the week. I thought it was fair and balanced but would have preferred more pertinent details. You can read it at http://www.indyweek.com/indyweek/public-input-sought-on-chatham-pipeline/Content?oid=2000185.

Tuesday I met with the town manager. We talked about several issues including a meeting with legislators Atwater and Hackney next week, how to improve information from traffic studies, a proposed Health fair that wants town participation, and the extension of Cary Parkway to Gorman Street in Raleigh.

Later Tuesday I met with three leaders from the Cary Police Benevolent Association (PBA). The Cary PBA defines itself as this:

“Our professional association is a non-profit organization funded by membership dues and citizen contributions that provides various forms of representation to officers and support service personnel who are members. We also support personnel by advocating changes to improve the quality of work life for our members along with addressing issues through political action.”

I have supported and will continue to support the PBA in their endeavors to help individuals and families through charitable events. However, this meeting was about political action. They reviewed the fact that I have not brought forward their wishes to council. It is important to note that NC General Statutes does not allow collective bargaining. Cary’s town attorney has advised that bringing issues forward on their behalf is essentially participating in collective bargaining. I tried to explain that point and that I must follow the advice from the town attorneys. Unfortunately, I was issued an ultimatum to start advocating for the PBA or they would not support me in the next election.

The Mayors and the Legislators

Thursday morning I, along with nine other mayors, met with the Wake County legislative delegation. Since the mayors will be presenting municipal legislative requests at a later date, we asked the senators and house representatives to share their thoughts of this upcoming long session. There were several important points made.

They stated that it is their strong intention, and their schedule reflects, the budget to be passed by June 1st. This is significant to municipalities since we have to have our budgets passed by June 30th and a significant portion of our revenue comes from the state. They also stated that we shouldn’t ask for any money since they are cutting (not a surprise).

In addition, they said that the temporary taxes scheduled to expire this year will probably be allowed to expire. Several other items discussed included the route of I540 around Garner, the tolling of I540, electronic email notices, and whether or not to close Dix.

We talked about our real estate acquisition process, how we go about it, and the flexibility with negotiations. Then we looked at a map of the properties in the area designated for the discharge line. He and his family have lived in that area for generations. He talked about the history of that area which was absolutely fascinating.

He made it very clear that it would be extremely difficult for him support the partners endeavors to put the pipeline through that area. Nevertheless, it was a very successful meeting that allowed us to get to know each other. Hopefully, we now have a relationship where he feels comfortable picking up the phone if he has any questions or concerns.

Emails this week included an announcement that we are accepting applications for Cary’s School of Government until the end of the month:

“Get an innovative, hands-on, behind-the-scenes look at Town government, decision-making, and the people and facilities that provide the services you use every day. Applications will be accepted through February 28 for the 2011 Town of Cary School of Government. Sessions are scheduled Wednesday evenings from 6 to 9 p.m. from April 6 through May 18 plus one Saturday morning session on May 7. For more information or to download an application, visit School of Government at www.townofcary.org or call (919) 469 4006.”

This is a great way to experience and learn how your government works. I hope that everyone who reads this will apply.

There were lots of other emails from citizens this week. The majority of them were on the topic of reassignment for Highcroft Elementary. Many of the emails I received wanted a traditional calendar but I also received a great number of requests to have a year round calendar. It is my role to represent my citizens’ wishes to the school board members which I have been doing. Board member Goldman has responded to several of the emails that I copied her on.

Next week will be busy with several intergovernmental meetings and a council meeting.

Well that is all for this week. My next post will be on Sunday, February 13th. Please feel free to email me with a comment. Email all Town of Cary questions or comments to Harold.Weinbrecht@townofcary.org. Email personal comments to augustanat@mindspring.com.