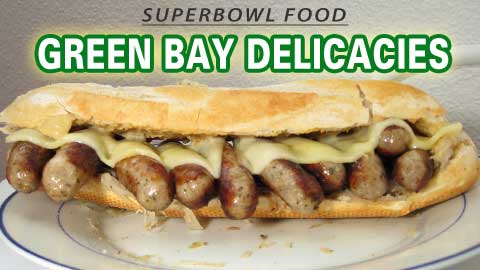 Cary, NC – This year’s Superbowl match between the Green Bay Packers and the Pittsburgh Steelers is epic in so many ways.

Last week, we ran a recipe for Pittsburgh’s Famous Primanti sandwich. This week, we’ll tell you everything you need to know about enjoying food the Green Bay way.

Based upon that exhaustive research, we have concluded that the Wisconsin Food Pyramid is built on three legs:

Walleye was also mentioned as a basic Wisconsin food group.

Wisconsin is the Dairy State. And “squeaky cheese” is a delicacy that’s common in Wisconsin but rare elsewhere.

Squeaky cheese is young cheddar, separated from the whey and salted but not yet pressed. It has a spongy texture due to air bubbles in the molecular makeup and audibly squeaks when you bite it.

The fresher the cheese, the bigger the squeak. The curds lose their squeak in as little as twelve hours. That’s why you have to live near a cheese factory (i.e. in Wisconsin) to experience the wonders of squeaky cheese. WisconsinMade.com will ship you three 9 oz bags of squeaky cheese for $16.95.

In Green Bay, they eat their cheese squeaky (that is, fresh) or deep fried (recipe below).

The bratwurst was popularized in Sheboygan County, Wisconsin in the 1920s. In general, each local butcher shop would take orders and hand make bratwurst fresh to be picked up on a particular day. The fat content of the sausages was substantial, making daily pick up necessary to avoid spoilage. Much of the fat was removed during the cooking over charcoal. Usually one kept a pan of cold water handy to the grill, so it was easy to dip one’s fingers in and fling the water onto the flames caused by the burning of the excess fat.

The bratwurst (or “brat”) also became popular as a mainstay of sports stadiums after Bill Sperling introduced bratwurst to Major League Baseball in Milwaukee County Stadium in 1953. The bratwurst were such a hit, Sperling said, that Duke Snider of the Brooklyn Dodgers took a case back to New York.

Currently, Miller Park in Milwaukee, Wisconsin is the only baseball stadium that sells more bratwurst than hot dogs.

See the bottom of the story for our authentic Wisconsin brats recipe.

Wisconsin may have the finest beer tradition in America. Scores of big breweries and specialty craft breweries and  have dotted the green landscape for generations. Before there was Samuel Adams (the beer), there was Leinenkugel’s, established in 1867. 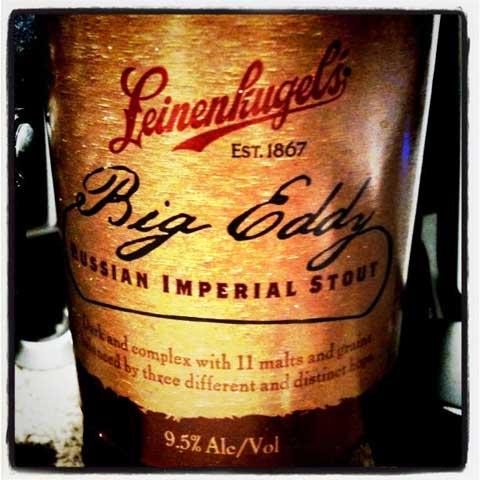 To make the batter, mix the flour, baking powder, and salt in a medium bowl. Stir in the milk and eggs, mixing until smooth. You can add more milk if you want a thinner batter.

Coat the cheese curds with the batter.

Over a medium flame, heat the oil in a large pan, pot or skillet. Fry the coated cheese curds for about 1 minute each until golden brown. Drain on paper towels. 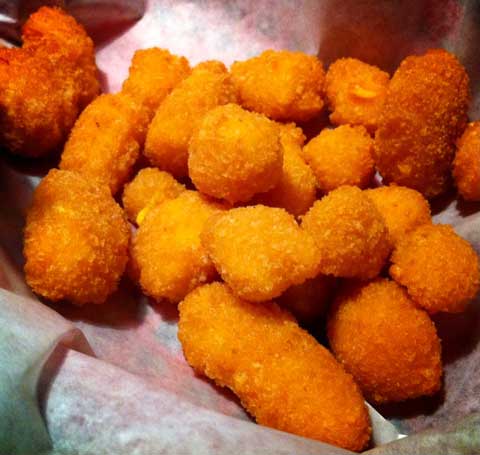 Brats are never boiled in beer. Some recipes call for gentle simmering in beer, but boiling will break the sausage casings.

The classic method for cooking brats is grilling. Purists will insist on charcoal.

Brats are fatty – you want to avoid flare-ups of hot flame underneath the brats. Move them to a cooler spot on the grill or flick a little water on the hot spot. Some brat aficionados keep a spray bottle of water handy.

To cook the brats –

Fire up the charcoal grill. Use crumpled paper or kindling as a starter instead of lighter fluid.

While the grill is getting hot, gently simmer the brats in the beer and onions. The surface of the liquid should be steaming, but not in an open boil.

When the charcoal is covered with white ash, spread it evenly across the grill. If you can adjust the height of the coals, drop them to their lowest position. Place the brats on the grill. Crack open a beer.

The idea is to thoroughly cook the brats, browning them evenly on all sides without blackening the skin. As mentioned above, keep them off of flare-ups of open flame. Use tongs, don’t puncture the brats with a fork.

When the brats are completely and perfectly cooked, put them in the holding sauce.

Combine all the ingredients and heat to a simmer (remember – don’t boil). Place the grilled brats in the holding sauce until it’s time to eat.

Brat buns are generally a little larger and heartier than hot dog rolls. Hoagie rolls or potato buns make a credible choice if you can’t find a brat bun in North Carolina. The Real McCoy is called a Semmel roll.

Wisconsins, like all people, differ on many things. Mustard is not one of them. Brown mustard is the proper condiment for brats. Kosciusko is a popular style. Gulden’s Spicy Brown is widely available.

Some folks like sauerkraut on their brats as well.

Potato salad, in particular German Potato Salad, is a common side dish with brats.

Find more ways to serve brats plus a recipe for Bavarian Semmel Rolls on the BratwurstPages.

Harold’s Blog: State of the Town, School Reassignment, Waste Water, Land... Harold’s Blog: What if the Mayor Goes to Jail?
Scroll to top
%d bloggers like this: