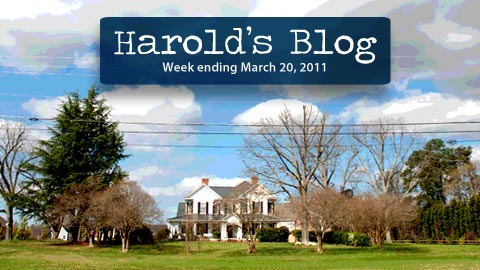 From the blog of Cary Mayor Harold Weinbrecht, covering the week through March 20, 2011. Photo by Hal Goodtree.

This week was another slow week which allowed me to catch up on work at my paying job.

Cary to Chatham County: No Annexation

In other discussions we talked about the Cary/Chatham County joint land use plan that is being worked on by subcommittees from both governing bodies. He expressed desire to have this be a binding agreement. That is, something that the next council could not easily abandon. We are having the town attorney check to see if this is possible.

Tuesday was a very light day. I met with the town manager briefly. We had very few items to discuss. The rest of the evening was spent signing documents related to the Western Wake Partners. I also signed a few letters and proclamations.

Wednesday I attended the NC Capital Area Metropolitan Planning Organization or CAMPO as we call it. This is a large committee made up of elected officials in the region, most of whom are mayors. The region includes Wake, Granville, Franklin, Johnson, and Harnett counties.

CAMPO serves as the coordinating agency between local governments, NCDOT, and FHWA. The CAMPO has established a close working relationship with the planning departments of municipalities within the Metropolitan Planning Organization (MPO) as well as with the planning staff of the neighboring Durham-Chapel Hill-Carrboro MPO.

Wednesday’s meeting had several items, the most contentious being the route of I-540 around Garner. There are many people opposed to the “red” route which would go through over 1000 homes and many industries. Just to have it as a consideration makes it difficult for businesses to expand or residents to improve or sell their homes.

The mayor of Garner gave a passionate plea to CAMPO using David and Goliath as story for comparison. He even tossed a stone to various elected officials as he talked. In the end CAMPO passed a motion to ask that the red route be taken off the plans for consideration. The meeting lasted about 2 hours.

Wednesday night I briefly attended part of a revival at First Baptist Church of Cary where I was warmly welcomed. I was able to see my daughter sign to a song but had to leave shortly after that because of private commitments. I did meet and greet about twenty or so citizens before the service.

Thursday night I met with the president and vice president of the Carolina Railhawks soccer team. They talked about the new ownership and their commitment to the community. The team was described as another strong team with everyone returning except for four players. They plan to have more involvement with the community with several interactions planned with clubs in the area. It sounds to me like they are on the right track with another winning team.

Saturday morning I gave welcome remarks at the Miles for Matt 5K run. This event, and other events, is in memory of Matt Cossa who died of a blood cancer. I gave welcoming comments and then joined the field for the run. While I don’t have the running pace I did 25 years ago I was at least able to finish 14th and 2nd in my age division. I look forward to participating in future events.

Sunday I got up a little before 5 AM and headed out to Brooks Park to give welcoming comments to the Tobacco Road Marathon. There were approximately 4,400 entrants in the marathon and half marathon. My comments lasted about 3 minutes. This was the 2nd annual Tobacco Road marathon which is the first official marathon in Cary.

Emails this week included a request to allow pink trash cans to support cancer. So far this hasn’t gotten any traction with council members. First of all let me say that cancer research is extremely important and I encourage everyone to support it in the best way they can. Having said that, here are some of the issues related to a request like this that staff and council members have to consider:

Other emails this week include concerns about proposed apartments at Tryon and Cary Parkway, a concern about a water bill that may be incorrect, a complaint about litter on the highways, a request for a round-a-bout instead of a light on Dixon, and comments about the PBA’s collective bargaining issue.

Next week will be a busy week with a meeting of the Wake County Mayors, a work session on quasi-judicial hearings, redrawing districts, and naming the arts center, a taping of Cary Matters, and a council meeting.

Well that is all for this week. My next post will be on Sunday, March 27th. Please feel free to email me with a comment. Email all Town of Cary questions or comments to Harold.Weinbrecht@townofcary.org. Email personal comments to augustanat@mindspring.com.