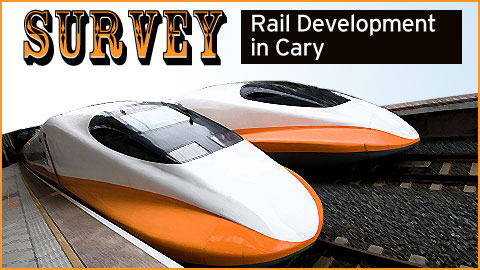 Cary, North Carolina – Since last week’s survey on a proposed $10,000 Tax Credit for New Home Construction proved so popular, we’ve decided to try it out as a regular feature. This week, we want to know what you think about proposed rail development in Cary.

Our survey last week asked readers what they thought about The New Home Purchase Act, a $10,000 tax credit for buyers of new home construction.

Results are from April 17, 2011. We’ll leave this survey open for a couple of more weeks. Go to last week’s survey.

Proposals for railroad development throughout the Triangle are gaining steam. What do you think?

Supporters cite the economic and quality of life benefits with having a 21st century mass transportation grid. They point to advanced rail developments in Europe and Asia, and to cities with dysfunctional transportation like Atlanta and Los Angeles, as alternate visions for our future.

Opponents object to the costs of building a rail grid in the Triangle and are skeptical about the necessary population density in our area to ever support such an expensive system.

Tell us what you think about proposed rail development in Cary. You can also read more in our earlier story Transportation: Triangle Moves Forward.

There are nine questions in the survey. Make sure you scroll down to see everything or vote at SurveyMonkey.

The survey is anonymous, but you can only vote once.

Make sure you’ve scrolled down to answer all nine questions and clicked ‘Done’. Thanks for participating in this week’s CaryCitizen Survey.