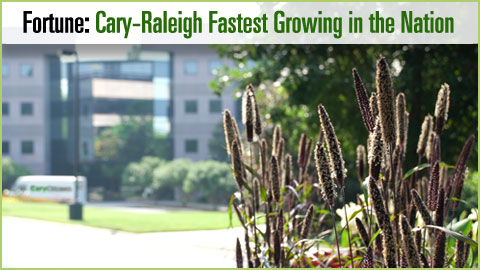 Cary, North Carolina – In an article from last week entitled Fastest Growing Cities in the South, Fortune writes that of the 11 fastest-growing areas in the country, 8 were in the South. Leading the pack: Raleigh-Cary.

I’m not sure why it’s not still called Raleigh-Durham, or even Cary-Raleigh, but what’s in a name? Fortune lists the region’s population as 1.1 million (sounds like the whole Triangle, not just Cary and that other town).

Silicon Valley of the East?

Even though we drink Muscadine instead of Chardonnay, Fortune referred to our region as the Silicon Valley of the East:

Raleigh is one corner of the triangle region of North Carolina, a booming area that includes Durham and Chapel Hill and is home to the largest research park in the U.S. In 2010, the Milken Institute ranked Raleigh No. 7 in its list of best performing cities for creating and sustaining economic growth.

This Silicon Valley of the East coast attracts flocks of IT-types for jobs at tech giants like Cisco and IBM.

Of course, the article in Fortune looks backward. So, what’s ahead?

I’m guessing more companies are going to develop a taste for Muscadine.

Downtown: MMI Moves to Cary Theatre: Puss In Boots is the Cat’s Meow
Scroll to top