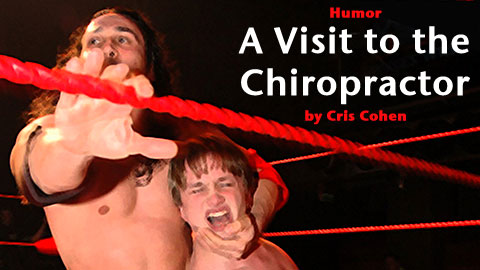 Cary, NC – We welcome humorist and Cary resident Cris Cohen as a contributor to CaryCitizen. For several years, Cris wrote a weekly column that ran in various California newspapers, but we won’t hold that against him. You can now find him here and on his blog “Nothing in Particular”. Photo by Stig Anderson.

A Visit to the Chiropractor

It’s an odd experience to go to a chiropractor.

“And what are you going to do?”

“I’m going to almost rip your head off.”

Well, my chiropractor doesn’t describe the procedures using those terms. For one thing, that kind of talk doesn’t lend itself to marketing. “Have you ever wanted to experience a near decapitation?” Statements like that should really be kept out of ads for doctors and saved for ads for horror films, ones where the main character carries a blood-stained farming implement.

What’s really amazing, though, is how good I feel after an appointment with my chiropractor. After just a few minutes of work, I no longer have any tension, muscle soreness, thoughts of watching reality shows. I used to only be able to achieve that state by ingesting multiple Advil tablets and enough wine to fill the dolphin tank at Sea World.

Like many people, I was at first dubious of chiropractor treatments. I just didn’t see how being pummeled by another person would lead to better health. I never looked at someone being beaten in a Jackie Chan film and thought, “I bet that guy feels really wonderful.”

“Take your pants off.”

“But we’re still in the waiting room.”

If a chiropractor makes you take off your pants, you might ask to see his credentials. “Are you licensed to practice? And why are we doing this in the back of a van?”