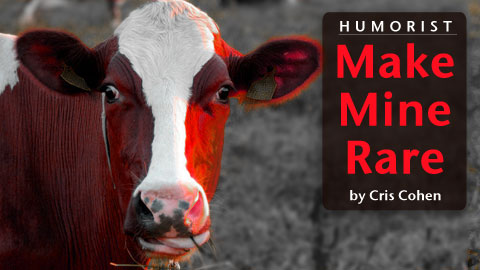 Cris Cohen is the resident humorist for CaryCitizen. Photo by Markku Åkerfelt.

Cary, NC – When eating out, a friend of mine will order a burger and ask that it be cooked rare. Based on the reaction he gets, this is the equivalent of saying he wants to kill kittens with his bare hands. “Would you like fries with your massacre?” Restaurants now consider the ordering of a rare burger to be not just rude, but a possible war crime.

“All I said was that I wanted it to be a little pink inside.”

“Again, sir, I advise you not to say anything until your lawyer is present.”

In North Carolina there is a state regulation that says that restaurants are not allowed to serve rare or even medium rare burgers. However, I believe the state does allow you to carry a concealed handgun. After all, a loaded weapon is much less dangerous than lightly browned beef. In fact, if you ask bank tellers what their number one fear is, most will say “masked men bursting through the doors with medium rare patties.”

The government does not want restaurants serving burgers that might contain bacteria. Of course, a number of these same restaurants have restrooms that could be classified as chemical weapons labs. They contain advanced bacteria that is aggressive enough to damage not just your immune system, but also tanks and battleships. If the government was really concerned about your health, they would insist that patrons exiting these bathrooms be put through a decontamination triage unit. Instead you are just given mild soap and a hand dryer.

This same government that does not allow medium rare burgers does allow restaurants to serve raw fish. It is more commonly known as sushi, which roughly translates to mean “something that was swimming just 10 minutes ago.” In this way sushi can be used as a reference to salmon or, on summer days, your Uncle Phil.

The fish used for sushi is not cooked. Serving it raw allows it to keep more of its natural flavors or “parasites”. The government does not have any problem with this, possibly because the raw fish is usually wrapped in rice and seaweed and therefore falls under the “concealed weapon” category.

Thus, my friend could try and convince restaurants that he is not really ordering a medium rare burger, but a meat-based sushi. Even still, he might want to do all his ordering through his lawyer.

Read more from Cris Cohen on his blog “Nothing In Particular”.

Packages for Afghanistan
Scroll to top