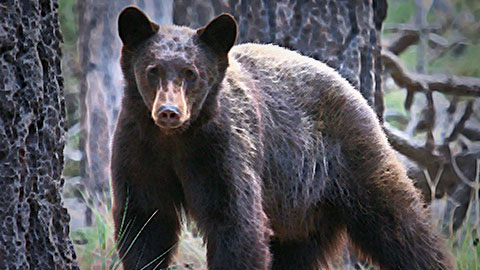 Cary, NC – Black bears have been reported as being sighted in Raleigh and Garner and now in Cary. It is unknown whether or not this is the same bear wandering the Triangle.

Shelly Davis, Animal Control Supervisor of the CPD, told us that last Sunday the Cary Police Department had at least two sightings of a black bear.  One was in the 200 block of East Chatham Street and the other was in the 100 block of East Johnson Street. At the time the bear was moving on and not causing any problems with people or property.

According to the North Carolina Wildlife Commission: “Black bears are an important part of North Carolina’s fauna. As people move into bear country in increasing numbers, it is ultimately human attitudes toward bears that will determine whether bears will continue to exist in the state. Unfortunately, bears are viewed either as dangerous animals or cuddly pets. It is best to avoid these extreme views and instead show a healthy respect for this magnificent forest animal.”

Leave Them Be, Report Them To The CPD

Bears in North Carolina occasionally wander into residential areas or towns in search of food.

Bears should be left alone (certainly do NOT try to feed them!). Eventually they will leave and return to a more natural habitat.

In reality they are generally shy and non-aggressive toward humans. There has never been a reported unprovoked bear attack in North Carolina. Black bear FAQS from the North Carolina Wildlife Commission.