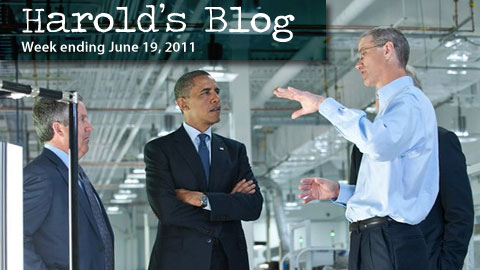 From the blog of Cary Mayor Harold Weinbrecht, covering the week through June 19, 2011. Photo from CreeLEDRevolution.

The week was a busy one for me which included intercity visitors, a Presidential visit to the region, and a council meeting.

The week started bright and early Monday morning with a talk at the Chamber of Commerce to a group from Gainesville, Georgia. They were on an intercity visit to see some of the things that make Cary great. In my talk I spoke about population growth, the budget, safety, diversity, and our sports and entertainment venues.

Before noon I headed to Cree in Durham to hear the President speak on jobs. Security was tight and I had to show my ID four times just to get to the parking lot across the street from the building.

A group of us, mostly Cree employees with a few business owners, stood outside in the sun for about 30 minutes waiting for the motorcade to pass before they would let us proceed. Of course this was fairly uncomfortable in a suit. Once we watched the motorcade drive up to the entrance of the building and the President was inside, we were allowed to cross the street and wait to go through metal detectors.

After I was finally inside I asked if there was a section for elected officials. There was but I was not allowed to sit with them. OUCH! In the front row of that reserved section was the Mayors of Durham, Morrisville, Chapel Hill and council member McFarlane from Raleigh. I guess they forgot about Cary. Oh Well. I got a good seat about 30 rows back.

I talked with a Cree engineer for about 2 hours while we waited for the speakers to begin. The first speaker was the VP of Cree who talked about how the company has grown in the last few years. Then Congressman Price and Senator Hagan followed and spoke about the importance of high tech, energy saving jobs in North Carolina. The President followed after that with about a ten to fifteen minute speech.

Since his talk was covered extensively by the media I will focus my comments on what was going on around him. There were roughly three dozen news cameras from all angles. Most were from local or regional media but the national media had presence there as well.

Having given a few speeches myself I was intrigued by his delivery. Of course he used two Teleprompters (the glass rectangles on poles). I was in direct line with one teleprompter so I could see him read it as he looked to my side of the room. I noticed a couple of stumbles as he spoke but he covered them very well. I also noticed how he must have gone off script and had to find his place. Been there done that!

After he spoke he shook hands with those on the front row and then he was out of there. I was lucky to beat the motorcade to the interstate and was able to get back to Cary in good time.

Monday afternoon I met with staff directors and managers to go over Thursday’s agenda. I told them that I was able to contact all council members and the only issue brought up was the Morrisville Parkway Speed Study.

Based on my conversations it appears that most council members are leaning towards going against the consultant’s recommendation and are favoring a lower speed limit. Staff pointed out that even if we set this speed limit lower, DOT could change it to higher once they take over maintenance of the road which would be soon. I believe there will be several speakers at the council meeting showing up for this item.

Monday night I attended a dinner hosted by the Gainesville delegation and the Chamber at An in the Arboretum. It was a lovely dinner and I was able to engage in great conversations with leaders from their region. They face many of the same problems that we do including growth, water, and transit issues. After dinner the Cary delegation bid them farewell. They had tours and meetings on Tuesday and then were headed back to Georgia.

Sleepless in Cameron Pond and Highcroft

Tuesday’s regularly scheduled meeting with the town manager was cancelled so we talked about a few issues over the phone. Two issues we talked about were the I-540 noise during nighttime hours and the town’s boards and commissions.

The I-540 construction noise has generated a large number of complaints from Cameron Pond and Highcroft neighborhoods. According to the contractor they have to pour concrete at night because it is too hot during the daytime. This is disrupting sleep and lives in the adjacent neighborhoods.

I have called for a meeting with the turnpike authority staff which will occur on Monday.

Wednesday I attended the Capital Area Metropolitan Planning Organization (CAMPO) in downtown Raleigh. One of the votes taken was the funding approval of a project list for fiscal years 2012 through 2020.

Cary had several roadway, bike and pedestrian projects rise to the top of this list for consideration including the NC 55/Carpenter Fire Station interchange and realignment and the White Oak Greenway Phase V construction.

Another CAMPO topic included a presentation of the transit plan schedule. It is projected that the half cent sales tax referendum for transit will be on the November 2012 ballot.

Also discussed at CAMPO, was the Bus On Shoulder System (BOSS). The concept is that transit buses will be allowed to operate on shoulders of major highways during congestion. This idea was first implemented in Minnesota more than 20 years ago. North Carolina is pursuing a pilot implementation of the BOSS in the Research Triangle area. If the test is successful, the program will be expanded to other routes with the goal of creating a regional BOSS.

Wednesday night council members and I met to go over performance reviews for staff. The Cary Town Council has three direct reports, the town manager, the town attorney, and the town clerk. We reviewed their comments and achievements and then ranked their performance. We will meet with them later in the month to go over our recommendations.

On the Economic Front…

Thursday started with a meeting of the Economic Development Governing Board which I am a part. In their quarterly report there were several interesting points:

•HCL America will add 200 new jobs in the coming months
•RIM (blackberry software) will add 80 jobs from space they have been occupying in Durham.
•Epic Games has over a million pre-orders for the latest version of “Gears of War”. Their previous versions were the highest selling in the world.
•There is a relatively high occupancy of Class A office in Cary. Some office parks report 90% occupancy rates.
•The Crossland project at Davis Drive and High House is prepared to meet with staff and move forward.

Recent accolades for Cary include:
◦#4 Small City for Quality of Life
◦#5 Small City for Economic Potential
◦#10 Small City for Human Resources
These were from the Financial Times annual ranks of “America’s Cities of the Future”. They were for cities between 100,000 and 250,000.

•In the rankings for the nation’s 80 largest metropolitan areas, the Raleigh/Cary area was named the nation’s 3rd Cleanest Metropolitan area. This ranking relates to water quality and litter.
•Our unemployment rate remains relatively steady at 5.6%.
The Governing Board recommended renewing our contract with the Cary Chamber. This is a $235,000 commitment from the town. The Chamber committed to accomplishing several objectives including the following:

•Institute/manage a business retention/expansion program
•Concentrate on product development
•Downtown revitalization
•Participate in regional economic development
•Establish and maintain small business entrepreneurial development programs
•Continue participating in improving the permitting process
•Tourism as a priority strategy
•Continue evaluating the retirement industry as an industry sector target
•Continue evaluating and adopting other industry sector targets
•Function as the primary marketing and prospecting organization
•Maintain a board consisting of the mayor, economic development liaison, the executive director of the Chamber, the chamber chair, and town manager to oversee the program.
•Provide quarterly progress reports.
Council will make the final decision on this contract at our next meeting.

Thursday night the council met at our 1st regularly scheduled meeting of June. As predicted the biggest issue which generated the most discussion was the speed limit on Morrisville Parkway.

Friday’s schedule had me meeting with the Mayor Pro-Tem for a quarterly gathering. She was headed out of town so we agreed to reschedule.

Saturday morning I headed over to Morrisville to join Mayor Holcombe at the Free Health Fair. There were over 600 in attendance who were given free health care by over 60 doctors. What is amazing is that there was NO media anywhere to report on this. Just the blood work alone has a value of about a $1000.

Saturday night I attended the symphony with my oldest daughter to hear the “Live and Let Die” performance. Being a Beatles fan I thought it was excellent.

Emails this week included an exchange between council and staff about a Cary News story on cell towers. Unfortunately there was a lot of misinformation. Here are staff’s comments on this story:

We are again working with the Cary News on getting a correction, this one involving today’s cell tower article.  They apparently chose to take the word of a contractor about public hearings instead of contacting area governments.

According to our Planning Department’s research:

Once again the Cary News choses Cary bashing over fair, balanced, and accurate reporting. For shame!

Other emails this week included a notification that Cary was among the top 100 places to live by RelocateAmerica and is in the running for top 10.

I received a lot of complaints in emails this week including tree removal in Waverly Place, a rumor of an Immigration Center relocating to Cary, the proposed apartments at Tryon Road and Cary Parkway, my support of the Cary Police department, and recommendations to support and oppose the suggested speed limit on Morrisville Parkway.

There were also numerous emails about the 24 hour construction on I540. This is creating a tremendous hardship on many Cary residents especially in Cameron Pond and Highcroft.

Next week will be busy at the beginning of the week but should slow down as the week goes on. As I mentioned I will be meeting with the Turnpike Authority. I will also meet with officials from the United States Tennis Association and I with the mayors of Wake County.

Well that is all for this week. My next post will be on Sunday, June 26th. Please feel free to email me with a comment. Email all Town of Cary questions or comments to Harold.Weinbrecht@townofcary.org. Email personal comments to augustanat@mindspring.com.

Contest: And the Winner Is….