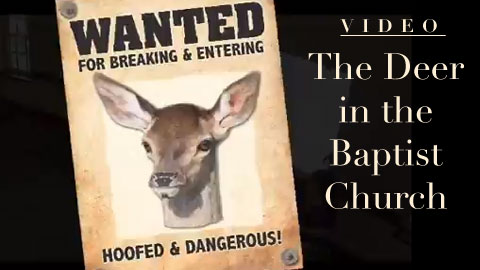 Cary, NC – Hard on the heels of our story about the Fox in Stone Creek comes this video of the deer in the Baptist church. It happened right here in Cary at Colonial Baptist Church at 6051 Tryon Rd.

The Deer in the Baptist Church

According to reports, the deer jumped through the window on Monday afternoon,  June 13. The church was full of people at the time. Colonial Baptist Director of Security and Safety Ed Maness wrote a hilarious account of the deer incident.

Best of all, it’s on video.

The deer invasion was recorded from beginning to end on Coloinal’s security cameras. The footage has been edited down with an appropriately light-hearted sound track.

As reported on CB, “no people or animals were harmed during this incident.”

Thanks to Colonial Baptist for sharing the video. As of Friday, June 24, it had 47,611 views on YouTube.

Fox in the Hood