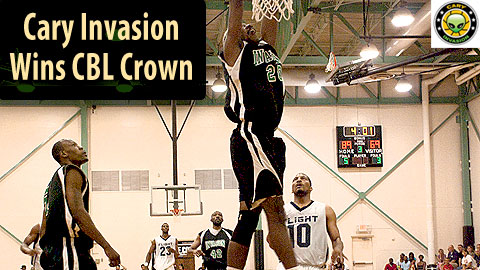 As the score indicates, it was the kind of up-tempo game we’ve come to love from the CBL. Cary, the CBL North champion (and arguably the best team in the league from the get-go), jumped out to an earlier lead.

Florida Flight, the CBL South champion, was overmatched but kept pushing it, looking for an opening. This was particularly true on the inside – Florida’s big men struggled with the size and athleticism of the Cary squad. The Invasion seemed to always clear the defensive glass and got a high percentage of second attempts on offense.

Chuck Ward was channeling Charles Barkley all night, as he’s done all season, red mouth-guard hanging out and ready to rumble. 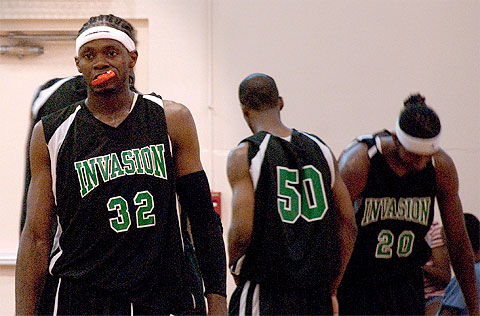 Freddie Little swished and dished, led all scorers with 26 and was named game and league MVP. He was 7 of 12 from 3 point land (58%) and had 5 assists.

Jonathan Moore sliced and diced his way to 21 points and 13 rebounds, actually making it look easy. They had no answer for him off the dribble, whether he’d pull up for a jumper or take it to the rack. No one in the CBL can guard Jon Moore one-on-one. 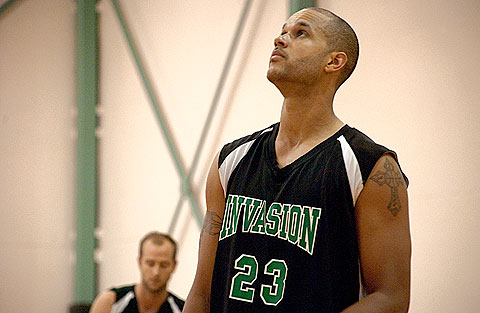 It’s quite an achievement: league champions in their first season.

Congratulations to Invasion Head Coach MarQus Johnson, named CBL Coach of the year. And much respect to owner Mark Janas for putting together such a successful basketball organization from scratch.

Let’s not forget all the players, staff and volunteers for putting in all the hard work it takes to win a championship. I saw kids from Cary Teen Council toweling the floor between plays. It’s a community effort.

The Invasion has landed. And they’re not going away. 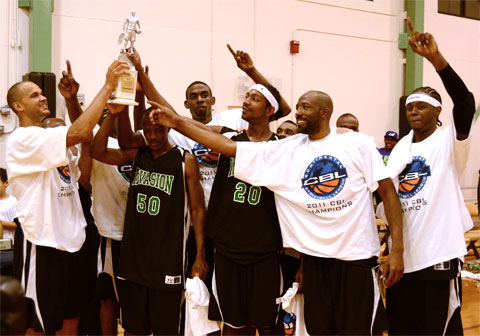