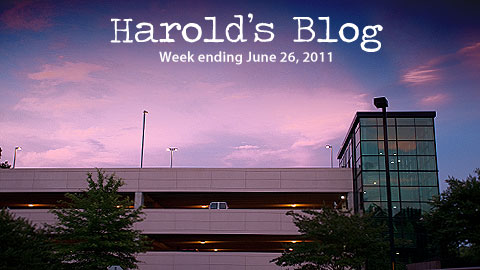 From the blog of Cary Mayor Harold Weinbrecht, covering the week through June 26, 2011. Photo by Hal Goodtree.

This week’s busiest day was Monday. The rest of the week was made up mostly of campaign related meetings and private gatherings.

Noise on I-540 Construction

After the interview I met with four key turnpike authority personnel on various issues related to the I-540 construction. The meeting was supposed to include staff and two other members of council but I apparently led the turnpike authority into the wrong conference room. So I ended up meeting privately with them for a half an hour.

After meeting with me they met with the rest of the group. In my conversation I asked about additives to concrete that would allow construction in higher temperatures and in daylight hours. I also talked about the option of turning off backup beepers in favor of a spotter to oversee the backup.

In addition, we looked at a map of the entire area and discussed their schedule. It was pointed out that there were only 6 nights left behind the Highcroft area. I also talked with the turnpike authority staff about the lack of trust and lack of communication. I asked that they meet with the community as soon as possible. So we decided on Wednesday, June 29th. We also decided to try and get Highcroft Elementary for the meeting.

Later in the week the meeting was scheduled for Green Hope Elementary.

After the meeting I was once again interviewed by NBC17 and gave them a brief summary of the meeting.

Talking Tennis to the USTA

I then headed to Embassy Suites to give a quick talk to people from the United States Tennis Association. It was a fun talk that lasted about ten minutes. If you know me you know that I love tennis and can talk about it at length. I have played tennis for almost 40 years, have held a state ranking for many years and was even a certified teaching professional in the 90s. Here is an excerpt of my talk that summarizes how I feel about tennis:

“…But tennis is also about strategy, problem solving, fellowship, and challenge. To me, tennis is a microcosm of life, and the skills and values we learn and hone through lifelong participation are many of the same ingredients to lead successful and productive lives…”

I left the Embassy Suites and headed over to the Mayors Association meeting. All the mayors were in attendance except Mayor Meeker and Mayor Sears. I brought up the noise issue with the Turnpike Authority and we spent most of the night sharing experiences with noise issues. The next Mayors Association outing will be at the Carolina Mudcats game on July 18th.

Tuesday was a short day for me. I discussed only a few issues with the town manager. Included in our discussion was problems related to the I540 noise issues behind the Highcroft subdivision, and a flyer circulating about an Immigration facility in a shopping center off highway 55.

Wednesday I met with someone with the media in an off the record discussion. Of course, nothing is EVER off the record but we had the discussion under that pretense. The discussion centered mostly on my history as an elected official. So I told how I got involved in local government and how I was first elected.

Saturday I attended a graduation party for the son of a friend and supporter. It was a lot of fun and very much like a wedding reception. The two emcees even dragged me up on the dance floor for a little Indian Fusion dancing.

There were several notifications of significance sent out by staff this week. First, contractors working on behalf of the Town of Cary will begin the removal of a 300,000-gallon steel elevated water storage tank at Kildaire Farm Road and Pleasants Avenue on Monday, June 27, weather permitting. It has been out of service for three years. The project is anticipated to be completed by the end of August 2011.

Staff also reported that they are working to minimize the impact to a large oak tree on the west side of Old Apex Road between Maynard Road and Chatham Street. There are fears that the construction of the Phillips Swift Creek Apartments might damage the tree.

Staff has spent a lot of time trying to gather information about a potential ICE facility (US Immigration and Customs Enforcement) at the Kroger near High House and Highway 55. This has concerned a lot of nearby residents; So much so that I, and other council members, will be meeting with the homeowners association next week. There is an existing ICE facility off Evans Road that may be moving. Here was a portion of the last email sent by staff at the time of my journal entry:

“…Regarding the ICE issue, today we have learned that with its lease expiring, ICE requested that the federal government’s General Services Administration assist in finding a new location within Cary for its work.  GSA issued a Request for Proposals.  Proposals have been received and are being evaluated, but no site selection has been made.

Please keep in mind that the leasing agent for the Kroger property says the property is under a sales, not leasing, contract with a developer and denies knowing anything about ICE.  Staff is working to find out whether the Kroger facility was proposed to the GSA.

Today we’ve also confirmed that If the federal government owns the relocation site, they do not have to file paperwork with or receive permission from the Town.  However, if they lease instead of own, they would need fire and other building code inspections from the Town.  Additionally, a change in use of a tenant space to any of the number of uses reasonably expected to be found within a shopping center within the Town of Cary (e.g., retail stores, offices, personal service establishments, restaurants, etc.) typically does not involve any type of development plan (Site Plan or Minor Alteration) or review by the Town’s Development Review Committee. …”

Other emails this week included a LOT of concerns and complaints. They included the proposed apartments at Tryon Road and Cary Parkway, DOT nighttime construction noise on I540 behind Highcroft, the speed limit on Morrisville Parkway, the removal of trees at the new Waverly Place, my “willful ignorance” in the Brad Cooper murder trial, the Lochmere AT&T cell tower, phase II of the Higgins Greenway trail, and West Park residents about the ICE facility.

Next week is shaping up to be a rough one for me. In addition to the regular council meeting I will be in meetings to hear concerns from West Park residents on the ICE facility, Highcroft residents on the I540 noise, and Cameron Pond residents on an I540 wall. It is important to note that the council meeting on Thursday will include the controversial vote on the Tryon Road and Cary Parkway apartments, the controversial Morrisville Parkway speed limit, and the budget for FY 2012. It will be council member Portman’s last meeting as a Cary council member. He will be resigning to take the vacant position on the Wake County Commissioners.

Well that is all for this week. My next post will be on Sunday, July 3rd. Please feel free to email me with a comment. Email all Town of Cary questions or comments toHarold.Weinbrecht@townofcary.org. Email personal comments to augustanat@mindspring.com.