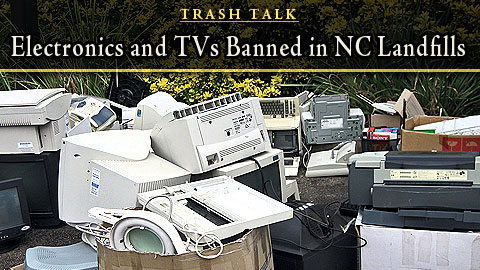 Cary, NC – The Town of Cary was the first in the state to offer curbside pickup of discarded computers for recycling. Now, a new statewide law bans all computers and TVs from landfills.

Since 2000, the Town of Cary has been collecting discarded computer equipment at the curb for recycling at no charge, while televisions can also be collected curbside for a small fee.

Only in the past two or three years have local governments in North Carolina begun to realize that old computers and television sets in landfills can cause serious health problems because they contain toxic heavy metals such as lead, cadmium, mercury and chromium.

But, since a new law passed by the General Assembly, all laptops, desktops, monitors, printers, scanners and peripherals such as mice and keyboards are now banned from North Carolina landfills as of July 1st.

The disposal ban not only keeps toxic heavy metals from the landfill, but helps divert highly usable materials to a growing electronics recycling industry in the state.

North Carolina is home to a number of major national and regional electronics processors with investments of plants and equipment exceeding $50 million that employ more than 300 North Carolinians.

“By capturing valuable materials for reuse and reducing our dependence on landfills, electronics recycling can help us achieve both our environmental and economic development goals,” said Secretary Dee Freeman of the Department of Environment and Natural Resources. “I encourage all North Carolinians to join in this effort to make the electronics disposal ban a success.”

Computer equipment and televisions join a list of other materials banned from disposal in North Carolina, including most recently plastic bottles, wooden pallets and oil filters. These bans have resulted in increased recycling of the materials and have helped spur further growth in the state’s recycling economy.

How to Recycle Your Electronics

Cary citizens can schedule curbside pick-up by calling (919) 469-4090. Citizens may also recycle these materials at the Citizen’s Convenience Center located at 313 N. Dixon Avenue at no charge. Commercial waste is not accepted there.

Also, all computer manufacturers are required to offer at least free mail-back for their own equipment, and some offer additional kinds of recycling options. A number of retailers also offer recycling of electronics, as do some nonprofit and charitable agencies.

A comprehensive list of recycling options can be found at: http://www.p2pays.org/electronics.