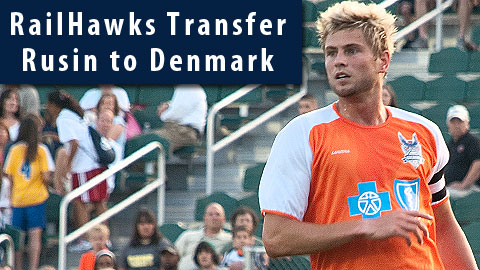 Cary, NC – RailHawks captain Brad Rusin is off to Denmark to play for HB Køge of the Danish Superliga (Denmark’s top league).

Why This Is Good for the Hawks

Rusin, a 6’4″ defender, played two-plus seasons with Carolina. He was voted captain during the off-season and was the mainstay in the middle of the defense.

So what’s so great for Carolina about letting Rusin go to Denmark? A couple of things:

The RailHawks have become a great organization for developing top soccer talent on a global stage. Three players from last season’s team – Daniel Paladini, Tom Heinemann and Daniel Woolard  – now play in MLS. Rusin joins them in the jump to the majors.

It doesn’t hurt that the Hawks are crushing it in the NASL this year. Halfway through the 2011 season, Carolina is 12-1-1 and lead the NASL table by 13 points.

All-in-all, this helps the Hawks attract more young talent to Cary and continues a growing tradition as one of North America’s elite soccer clubs.

Martin Rennie had a nice send off for his former captain:

“Over the last few seasons, Brad developed a lot as a player,” said RailHawks coach Martin Rennie. “The potential he showed when he first joined our club is about to come to fruition. He’s going to play in one of the top leagues in Europe, and we’re looking forward to watching his career progress from afar. I’m excited to see where he’ll go. We wish him all the best and expect him to do quite well.”

With the first half of the season over, it will be interesting to see who steps up to fill the defensive space left by Rusin’s departure. In a young, hungry team, you can bet there are a lot of players eager to get a crack at the spot.

The Hawks are home again for two Saturday night games on July 23 and July 30. For tickets, visit CarolinaRailhawks,.com.