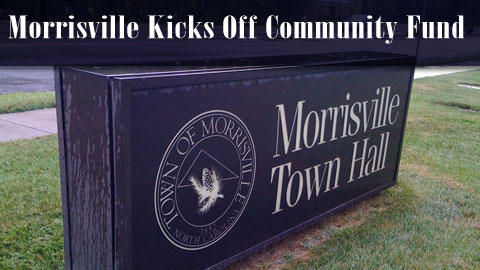 Morrisville, N.C. – The brainchild of several involved citizens led by former Mayor of Morrisville Jan Faulkner finally came to fruition on Thursday night with a champagne toast and the “ringing of the bell” by Mayor Jackie Holcombe’s daughter, Lindsay. Morrisville’s Community Fund was born.

The event was held in the Morrisville Historic Christian Church on Church Street. The old church was filled with caring citizens, local politicians and business leaders.

Mayor Holcombe kicked off the festivities. “This evening’s celebration is the culmination of a 2 year process to create a community-strengthening philanthropic organization.  Our Morrisville Community Fund donors reflect our town’s rich cultural diversity and the MCF will serve as a legacy to their generosity.” Former Mayor Jan Faulkner took the stage and talked about the Town’s amazing history as it has gone from 250 – 18,000 residents over the past 30 years. Ms. Faulkner reported that there was $19,350 in the fund in a process that began “what seems like a bazillion years ago”. Minutes later a guest pledge another $650, so the team could say they doubled their target of $10,000.

Mayor Holcombe told us that the original notion for the MCF came out of discussions that Ms. Faulkner, Town Manager John Whitson and Town Council Member Liz Johnson had years ago.  Ms. Faulkner will serve as the Chairperson of the Morrisville Community Fund Boad of Directors. Two years ago they formed the Morrisville Community Fund Steering Committee.

With guidance from Jeanne Lawson at the North Carolina Community Foundation, the Steering Committee set out to raise the initial seed money needed to start this Fund.  They have a cross-section of Morrisville residents, businesses, and faith-based organizations that share the vision of Mayors Jan Faulkner, Jackie Holcombe, Town Manager John Whitson and Town Council Member Liz Johnson.  Morrisville is a welcoming and diverse community with a rich history and our Founding Members reflect that.

Liz Johnson told us,  “I am honored and proud to have worked with our Steering Committee to bring the Morrisville Community Fund to fruition.  I am equally proud of the diversity of our Founding Members, a cross-section of Morrisville residents, businesses, and faith base organizations, who reflect the welcoming, rich Morrisville community.  This Fund will serve the current and future Morrisville residents for generations to come.”