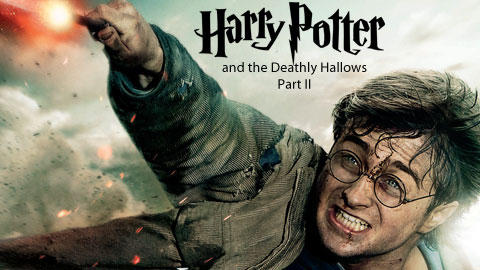 Being a massive Harry Potter fan, Friday July 15th approached with a sense of dread.

I started reading the series when I was eight years old in 1998 and have grown up with Harry ever since. I started attending the midnight premieres of the movies in 7th grade with my best friend, whose extremely understanding mother drove us to and from the movie theater where we grew up in Bloomsburg, Pennsylvania. While the release of the seventh book was the end of the series, us serious Harry Potter fanatics could still relax knowing that there were more movie releases to celebrate. 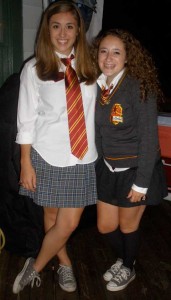 Now, however, we must accept that the series we love and literally grew up with has come to an end. There are no more books to read, no more movies to see, no more reasons to don a maroon and gold tie.  However, fans can rest easy knowing that the conclusion of their beloved book series was translated onto the big screen better than any of the previous films.

At the Cary Premier

I arrived at the Cary Crossroads movie theater with my best friend around 10:30pm. We were both in costume, of course.

I was decked out in a full Gryffindor uniform complete with tie, sweater and Prefect badge, while she was wearing a homemade Fawkes costume with wings and feathers. As we walked into to the theater, we were excited about the level of enthusiasm displayed by North Carolinian Potterheads- everyone was in costume and the atmosphere was anxious, yet gleeful. 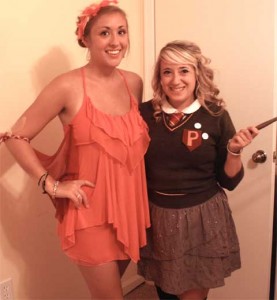 There were strangers posing together for the sake of a good picture- a petite Indian girl dressed as Dobby cowering under a tall, thin, haughty looking Bellatrix, and a round, scruffy Harry carrying a prim, brunette Golden Snitch.

As the minutes counted down to midnight, songs and cheers broke out, until finally the Warner Brothers logo flashed across the screen. There was applause, and then silence.

The movie itself was two hours of back-to-back action. It starts where Part I left off – with Voldemort gaining control of the Elder Wand and Harry burying Dobby. Now, the trio of Harry, Ron and Hermione has to destroy the rest of Voldemort’s horcruxes in order to kill him once and for all. It all leads up to the final battle at Hogwarts, the ultimate confrontation of good and evil.

Fidelity to the Book

Of course, being a Harry Potter fanatic, I judge the movies first on book accuracy. Of all the movies, both Deathly Hallows Part I and II did an excellent job staying true to the book. Of course, there’s no way to fit in absolutely everything and there were some things that were left out, but it was nothing so important that it ruined the movie or even worsened it. Let me put it this way- The Deathly Hallows movies were the only movies of the series that I walked out completely happy with, and I consider myself a pretty tough critic.

The look of the movie is absolutely stunning. They show how changed Hogwarts is under Snape’s regime, with creepily perfect lines of marching students. The movie really plays up the white and black coloring to symbolize good versus evil. The whole build-up to the final battle is great too, with all the teachers casting protective enchantments, like having huge statues come to life.

The best part of the movie by far was the stellar performances. The three stars have grown and matured into these roles. Daniel Radcliffe portrays a Harry who’s got the fate of the world on his shoulders and he’s ready to fight. These aren’t the days of Quidditch and school crushes- this film is dark and violent and viewers who aren’t as familiar with Harry Potter should be prepared for that. Emma Watson and Rupert Grint do an amazing job at finally showing the adorable romance between Hermione and Ron that everyone (me especially!) has been waiting for since Prisoner of Azkaban without making it sappy or the center of the movie.

Matthew Lewis finally gets his moment of glory in this movie, as Neville Longbottom finally becomes the true Gryffindor we all knew he could be. His little moments will make you laugh out loud, like him taunting a mountainside full of Death Eaters from behind a protective shield and then turning around and sprinting when the shield breaks.

Maggie Smith’s Professor McGonagall is just downright awesome in this movie. She’s fiercely protective of the school she loves and the cause she’s ready to give her life for. Also, Maggie Smith was undergoing chemotherapy during the filming of the movie, which makes me respect her a thousand times more.

Of course, the best performance goes to Alan Rickman’s portrayal of Snape. As readers of the books know, the character of Snape becomes so much more complicated than we could’ve ever imagined in Deathly Hallows, and Rickman does a stunning job of showing that deep internal conflict. The Pensieve scene will have you in tears, without a doubt.

Of course, I’ve read this book series so many times I can’t even remember anymore, so I can’t be positive if a person who only watched the movies would clearly understand what was going on. My only gripe about the movie was that sometimes things seemed to come too easily for our heroes. Where in the book there was a couple pages of investigation and figuring out every clue, the movie rushes this part a bit. With so many great things about the movie, however, this little complaint is easy to overlook.

Harry Potter and the Deathly Hallows was an epic and fitting conclusion to the book series I spent my childhood (okay, life) obsessed over. I got to see my favorite parts of the book played out on the big screen (“Not my daughter, you bitch”, anyone?).

Bigger Than a Movie

After the movie, I hugged my best friend and struggled to hold back tears as I walked to my car alone. It seemed like the end of an era, or at least the end of my childhood.

Here I was, so far from home, walking away from my best friend since kindergarten and our yearly Harry Potter midnight premiere tradition. In a month, I’ll leave for Berlin, where I’ll study abroad for a semester in a country where I know absolutely no one.

It seems like everything familiar about my life is ending, but thanks to Harry, the unfamiliar doesn’t feel scary. I know the magic didn’t end with the credits, because as Dumbledore said, “I will never truly be gone unless none here are loyal to me.” I’m certain my generation will never stop being loyal to Harry and the ideals he represents and I know I’ll be reading the books to my children. I’ll also be channeling my inner Gryffindor and trying my hardest to be brave when I step on that plane to Berlin.

So to JK Rowling and to Harry, thank you for thirteen magical years. I don’t know where I would be without you.

Brennin Cummings is a journalism student at Ithaca College. She is spending her summer internship with CaryCitizen.