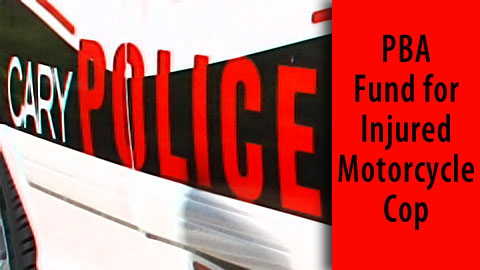 Cary, N.C. – On Friday, Cary Police Officer Chad Penland was making a routine traffic stop near the corner of NC55 and Morrisville-Carpenter. But a collision between the motorcycle patrolman and an oncoming vehicle almost ended in tragedy. Now the Cary PBA is seeking your help.

Late Friday afternoon, Officer Penland saw a traffic violation, flipped on his blue lights and siren, and accelerated through the intersection of NC 55 and Morrisville-Carpenter Road.

Locals will recall that this is a newly opened intersection onto the busy highway. An oncoming motorist did not see or yield to Officer Penland, resulting in a head-on collison between the police motorcycle and a pickup truck.

Penland, 32, flipped over the front of the bike and flew more 20 feet in the air, according to reports.

One of the witnesses was Jessica Elliot, a nurse from Lynchburg, VA. Ms. Elliot stopped and assisted Officer Penland, who remained conscious but was in pain and having trouble breathing.

The officer was taken to Duke University Hospital. His injuries are serious but not considered life threatening. The driver of the pickup truck was cited for failing to yield the right-of-way to a police officer.

The Police Benevolent Foundation and the Cary Chapter of the North Carolina Police Benevolent Association are asking for your support for officer Penland. The Cary chapter hopes to alleviate some of the expenses for his family as they support Chad and his recovery efforts.

Chad is originally from Burnsville, NC and completed Basic Law Enforcement Training at Asheville-Buncombe Technical Community College before beginning his law enforcement career with the Burnsville Police Department.  He transferred to the Cary Police department in 2003.  Chad is currently assigned to the Traffic Safety Team as a motorcycle officer.

An account has been established under the Police Benevolent Foundation entitled the ‘Chad Penland Fund’. Contributions to this fund can be made at any Wachovia.

The Police Benevolent Foundation will be taking donations online through the PBF website.  Go to pbfi.org to donate. The Police Benevolent Foundation is also taking donations via text messaging.  You can help by texting the phrase COPS PENLAND  to 85944.   A $10 donation will be made to the fund through the contributor’s cell phone bill.

The Cary Chapter is asking everyone to please pass this information along to friends and family and to keep Chad and his family in your thoughts and prayers.