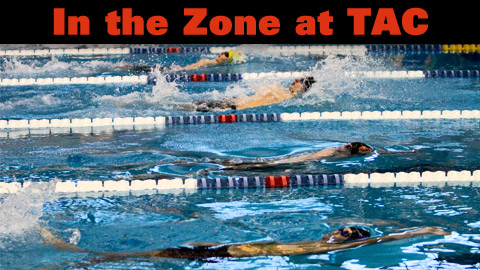 Cary, NC – It’s one of the biggest swim meets of the year. Over 600 swimmers from West Virginia to West Texas have converged on Triangle Aquatic Center in Cary for the Southern Zones Championship meet.

The Southern Zone Championship at TAC is called an Age Group meet – swimmers from 11-18 who have been nominated by their local swimming clubs.

These kids are the swimming champions and Olympians of tomorrow.

Meets like the Southern Zone Championship bring hundreds of families and guests to Cary and the Triangle.

The Southern Zone Championship began on Tuesday and runs through Saturday.

Ronnie Roach, the Safety Marshall for the meet, wrote to CaryCitizen inviting the public for an athlete parade before the finals on Friday night. Finals start at 5:30 PM. More prelims and finals on Saturday as well.

Daily admission is $5 for adults and $2 for kids and seniors. More info at TAC.

Food: Cupcake Bar (Buy a Round)

Wanted: Kids for Video Downtown on Saturday
Scroll to top