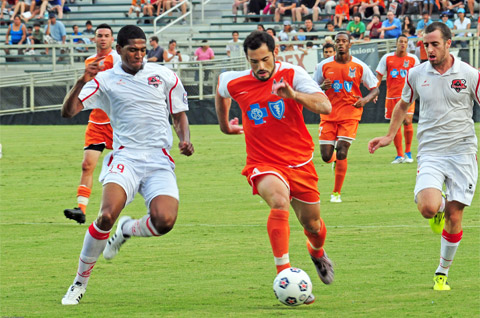 Game summary from the Carolina RailHawks. Photos by Chris Adamczyk for CaryCitizen.

CARY, N.C. – The Carolina RailHawks earned their league-leading 14th victory Saturday night after defeating Atlanta 1-0 in a match that was abandoned in the 50th minute at WakeMed Soccer Park.

“It was an unusual game,” said RailHawks coach Martin Rennie. “It was disappointing, the fact that it was stop and start. We couldn’t get a rhythm in the game. I felt like we were playing quite well when the first break came. We were up 1-0, and after that, it was stop-start. We knew the way the weather was, it was important to be winning at halftime. Overall, I’m happy. It’s another three points and it keeps us in good forward momentum.” 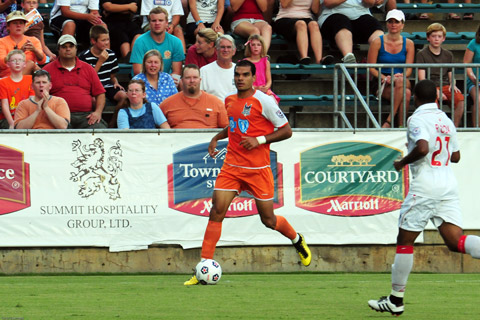 The RailHawks (14-2-2) stretched their lead at the top of the NASL table to 15 points with Saturday’s win, their ninth straight at WakeMed Soccer Park.

The match was first delayed in 22nd minute when lightening was spotted in the vicinity of WakeMed Soccer Park. Play resumed 42 minutes later.

The teams played for nine more minutes until a second cell of thunderstorms parked over the area causing a 62-minute delay.

The teams came back out and completed the first half, then went into their locker rooms for the 15-minute intermission.

In the 50th minute, torrential rains came along with more thunder and lightning, causing a 24-minute delay before both teams’ coaches and the officiating crew agreed to abandon the game.

The miserable weather dampened what was shaping up to be a raucous evening at WakeMed Soccer Park. More than 5,000 people were in their seats before being chased away by the delays  2,500 of whom came via the RailHawks’ Kicks for Kids promotion. Through the generous contributions of nearly two dozen Triangle businesses  including Lulu, Performance Automall, Eye Care Center and Wal-Mart  Kicks for Kids afforded 2,500 area children the opportunity to attend Saturday’s match.

Getting a Goal When it Counts

From the opening whistle, fans were treated to the RailHawks attacking flair that has tallied a league-leading 39 goals this season.

Twenty seconds in, Nick Zimmerman fired a shot from inside the 18 just wide of the frame.

In the eighth minute, Etienne Barbara bagged his league-leading 16th goal. Zimmerman played Barbara into the area, and Barbara fought off a pair of Silverbacks defenders before squeezing a shot past goalkeeper Felipe Qunitero.

“On a night like tonight, having someone who can put the ball in the back of the net is key”, Rennie said. “When you’re doing it in short bursts like that, it’s much harder to get a goal. Etienne came up big.”

After the first delay, Atlanta came out on the attack. In the 29th minute, Willie Hunt flicked on a corner kick and Matt Horth had a sitter in front of the RailHawks; goal, but Carolina goalkeeper Brad Knighton smothered the chance. Knighton finished the night with three saves en route to his sixth shutout of the season. 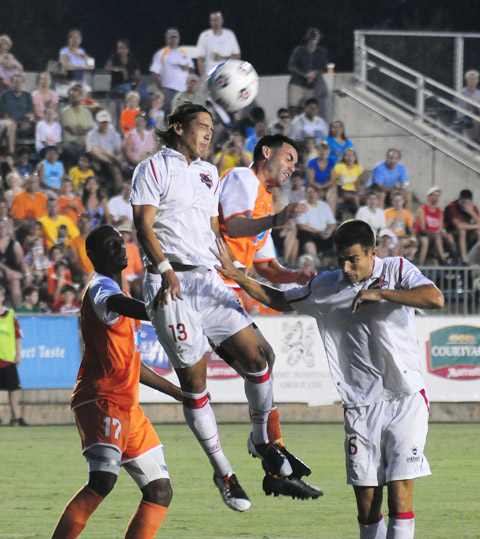 When play resumed after the second weather delay, the RailHawks nearly grabbed two more goals. Barbara led a one-man counterattack into the Atlanta area, only to have his shot deflected away by Hunt. Five minutes later, on a free kick, Jonny Steele spotted Zimmerman near the penalty spot, but Quintero saved Zimmerman’s one-time try.

The weather looked like it would hold off as the teams went into halftime, but rain started to fall just before the players returned to the field. Five minutes into the second half, sheets of swirling rain doused WakeMed Soccer Park, and the sky was illuminated with persistent flashes of lightening for almost a half hour before the decision to abandon the match was made.

“The referee and both clubs agreed that’s what we had to do,” Rennie said. “It just wasn’t going to clear. Even in a couple hours if it did, the field was going to be unplayable and the players were going to be exhausted. There’s nothing we could do.”

The RailHawks will play their next two matches on the road at Ft. Lauderdale next Saturday and at Puerto Rico on Aug. 10 before returning to WakeMed Soccer Park on Aug. 17 to face Minnesota. 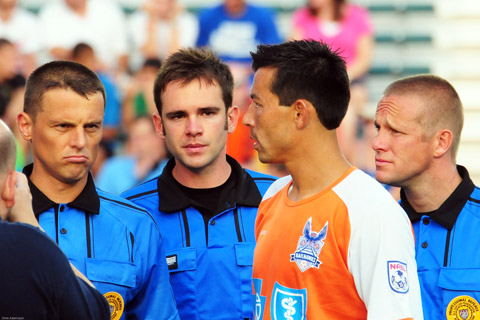 Harold’s Blog: Highlights from the Quarterly Report
Scroll to top