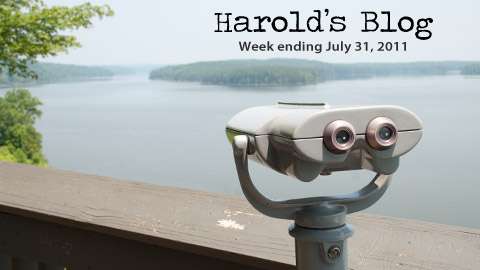 From the blog of Cary Mayor Harold Weinbrecht, covering the week through July 31, 2011. Photo by Hal Goodtree.

I started this week at the beach as the family had one last long weekend together before the girls head off to college. We returned on Tuesday evening and it was back to work on Wednesday.

Wednesday I participated in a short video for Dorcas ministries. They will use this on their web site and for talks and presentations. The narrator of the video was Bill Leslie from WRAL.

Thursday I attended the Raleigh Chamber of Commerce Partners dinner at North Ridge Country Club. It was a who’s who in politicians.

Some of the people I talked with included Kevin Hill and Debra Goldman of the Wake County Public Schools, Mayor Matheny from Zebulon, Mayor Broadwell from Wendell, Mayor Eagles from Rolesville, Mayor Jones from Wake Forest, and Mayor Williams from Garner. I also talked with several legislators, Raleigh council members, county commissioners, and business owners.

Joining me at my table for dinner were three mayors, newly appointed Wake County Commissioner Portman, and two executives from Waste Industries. Speakers for the evening included chamber representatives, Raleigh council member Hunt, Goldman, Broadwell, and others. There were about 100 in attendance and the event ended in about 2 hours.

Friday morning I headed to the Board of Elections in downtown Raleigh to file for my second term as Mayor of Cary.

For the past four years, I have worked to enhance the quality of life for Cary’s citizens by pursuing balanced growth, bringing in high paying jobs, showing fiscal discipline, being the citizens’ advocate and increasing environmental protection.

As we continue to move Cary forward we will need steady, proven leadership to ensure that our town remains one of the best places to live, work, play, and do business in this nation.

I have delivered on my promises and if re-elected, I will continue to advocate for citizens, not for special interests. I believe that Cary citizens want to continue in the direction that my council colleagues and I have collectively set.

Friday evening I headed over to the Triangle Aquatic Center for the Southern zonal championships.

I was hoping to get there in time for the parade but missed the start by a matter of seconds but I was able to observe it in its entirety. The parade allowed the swimmers to dress up, cheer, and march around the pool deck as they were introduced. After the parade I gave a few words of welcome and then watched a few races. In total, approximately 700 swimmers from 11 states were competing and were joined by siblings, parents, and friends.

Needless to say, this event was a good economic boost for the town.

Highlights of the Quarterly Report

The quarterly report was emailed to council this week. Highlights include the following:

Well that is all for this week. My next post will be on Sunday, August 7th. Please feel free to email me with a comment. Email all Town of Cary questions or comments to Harold.Weinbrecht@townofcary.org. Email personal comments to augustanat@mindspring.com.