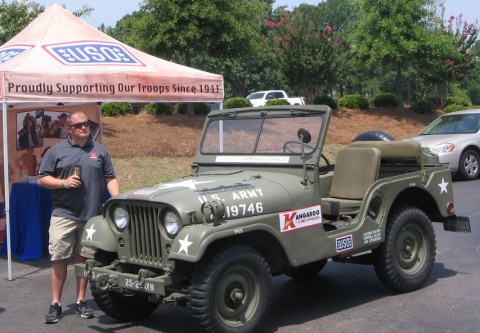 This refurbished 1952 Jeep has traveled to 75 cities to raise over $1.35 Million for USO

photos and story by Lindsey Chester

The “Salute Our Troops” Jeep Tour

With temps soaring to 100 on Wednesday, a crowd gathered to  “Salute Our Troops” at the Davis Drive Kangaroo gas station in Morrisville.

The campaign has featured a fully-restored 1952 CJ-3 Willys Jeep, which travels to each of 75 locations from Memorial Day through Labor Day, logging over 10,000 miles.

$1.35 million has been raised for the USO, the Wounded Warrior Project and state-based military support organizations in five states, including the North Carolina National Guard Soldiers and Airman Assistance Fund.

Ninety percent of those funds have been donated by Kangaroo Express convenience store patrons.

John Fisher, VP of marketing for the Pantry, owners of Kangaroo, explained that the Cary-based company did a survey of their employees and found that over 1/3 had a connection to someone serving in a branch of our armed forces.  Over 850 stores are located within a 25 mile radius of a military installation. They decided to help organizations that would also help their employees and families.

“When our people are fired up to raise money, the program is really successful. This taught us to recognise people who have served in the military and made sacrifices”. John added they are “humbled to be part of this campaign.”

Employees Made the Difference

Two fired-up Kangaroo employees, Xavier White and Delmas Cooper, and their store manager, Christina Withy, were recognized with certificates for their contributions. With their help, the Morrisville location has earned top honors as the highest donation site. Kangaroo wanted to raise $1 million, but stores like this one pushed them past their goal.

Larry Stogner of ABC 11  reminisced about his own homecoming from Vietnam, stating that back then “soldiers did not get the welcome home he now sees. And added it is so gratifying to see Kangaroo recognise and raise money for the USO.” He was visibly choked up.

At each campaign stop, local heroes are given special recognition. Silver Star recipient and North Carolina native, Sgt. Tommy Rieman was honored Wednesday. Sgt. Rieman is featured in the documentary Halfway Home and is a face of the U.S. Army’s “America’s Army:  Real Heroes.”

The organization has offered a unique salute called Video Salutes and has received over 1400 video clips honoring soldiers. Cameras were ready on Wednesday at the event for anyone to create a salute on the spot.

Its Not Too Late To Help

Visit a local Kangaroo/ Pantry convenience store, there are at least 8 in and around Cary. Look for the donation box and give what you can. Or learn more at the Website.

Tell them CaryCitizen sent you.