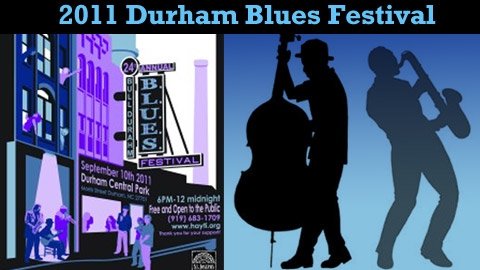 Story by Julie Roland. Her Route 64 Journal in Pittsboro is managed by CaryCitizen.

Durham, NC – It’s moving, it’s one day and it’s going to be free. But after a period of some uncertainty, The Hayti Center has announced that the 2011 Durham Blues Festival is on for Saturday, September 10, 2011.

The Blues in Central Park

The Festival is one day this year and is moving to Central Park from its former home at Durham Bulls Athletic Park.

No official word yet on the 2011 line-up. I hope they get a few great local bands in the mix like A Fifth of Blues.

St. Joseph’s traces it’s roots back to 1868 when Edian Markham, an African American Methodist Episcopal Missionary and former slave, came to Durham to establish a church.

In 1891, the cornerstone was laid for the structure of St. Joseph’s AME Church with its grand steeple and elegant stained glass windows. W.E.B. Dubois said, “never in all my travels have a seen a church as great as St. Joseph’s.”

In 1975, St Joseph’s established a foundation to support heritage through cultural arts. Today, Hayti Heritage Center continues to be an agent of social change with a long-term commitment to utilizing the arts as a tool to bring communities together and establish common ground between all people.

Admission to the Durham Blues Festival is free this year.