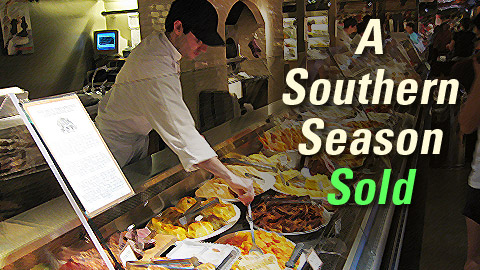 Chapel Hill, NC – A short drive from Cary is A Southern Season, one of the state’s most wonderful and famous places to buy food, cooking implements, home wares and more. CaryCitizen was interested to learn that the business was sold to a prestigious group of local investors.

Founded in late 1975 by Michael Barefoot, A Southern Season grew from a ole proprietor operation in 800 square feet to 60,000 square feet of retail space in University Mall and more than 300 employees.

TC Capital Fund, headed by Chapel Hill entrepreneur Clay Hamner, invested a significant amount of growth capital into the company, according to a press release from the company.

“A core part of our mission has always been ‘local ownership and operation’.” says founder Michael Barefoot. “That will not change; ownership remains local in this new corporate structure … we will now be positioned to grow to the next level.”

“For most of A Southern Season’s history,” added Barefoot, “Clay has been a loyal customer and supporter of the philosophy and values of what we’re all about. As the company experienced the economic downturn in early 2009, like other businesses did, Hamner initiated discussions about helping the company grow.”

“We have stayed in close communication since, and finally, all the pieces came together. His long-respected local profile along with the other local investors was definitely a key part of our decision. They absolutely relate to this Chapel Hill institution on a very personal level and share our commitment to keeping A Southern Season something very, very special.”

Michael Barefoot will continue to play an active role in the business, along with longtime partners Tim Manale and Briggs Wesche.

Regarding the impact of the sale on his personal future, Barefoot said, “This is the first step in a slow transition away from work. After 36 years, I think that it’s about time. I will be fully engaged at A Southern Season for the next five years, after which I plan to reduce my involvement to pursue other challenges and interests which I have not been able to do as I was growing A Southern Season.”

Business coverage on CaryCitizen is sponsored in part by Ultimus.

Taste of the Triangle Returns August 17