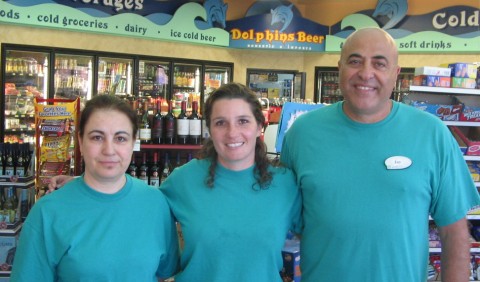 AmyLibbus (center) and her husband Jihad, own and operate Dolphin's Mart on NC 55

Cary, NC – Ever drive by the Dolphin station on NC 55? The owners, Amy and Jihad Libbus, have a fascinating story.

In this day and age, who would think that the gas station on the corner would be owned and operated by a neighbor? But that’s exactly how it works at Dolphin’s.

The mart is conveniently located on NC 55 for commuters in a hurry, with 20 pumps serving BP gas. But Dolphin’s is independently owned and operated. Stepping inside, I realized the shop is far more than a convenience store.

The center piece of the store is the salt water fish tank. A multitude of ocean fish swim inside and  keep children visitors busy while parents place orders.

The fish tank clued me in that more surprise offerings would be found. There was a wine selection  prominently displayed. The next area was a full service deli, with a delicious chicken salad I might add.  Larry’s Beans coffee is sold by the pound. Of course there is the wall of refrigerated drinks and beers, but also in the case were burritos. They had a chiller with fresh fruit, and Good Humor ice cream. There are tables for folks to sit down and dine-in.

Recently Dolphin’s began selling Dominoes Pizza, which is take-out only. They are also a certified US Postal service. You can buy stamps,  mail packages and conduct most postal services right from their counter.

From Shearon Harris to Nortel to Dolphin

Amy is a transplanted New Yorker and she met her husband Jihad here in Cary when she was working at Duke.

Jihad is originally from Lebanon and earned his masters in Civil Engineering at the University of Missouri. So how did he come to live in Cary?

He moved here twenty-five years ago to work as a civil engineer on the Shearon Harris Nuclear plant with Daniel International. That was the  last nuclear facility built in the United States.

When that project was finished he realised how much he liked living here. He continued work in construction, building Nortel and other projects through the 1980’s and early 1990’s.

Bringing the Family Together

In about 1996 Jihad helped his youngest brother, Lebbos, immigrate from Lebanon. With his brother’s somewhat limited English, Jihad was concerned about where he could find work. Jihad decided in 1997 to buy the filling station that is still located at the corner of Carpenter Fire Station and 55.  At that time he had another brother, Bisharah, living in Florida and a sister, Dia, in California. He began to wonder if somehow they could all make their homes here.

The idea for the family business began to evolve. In 1998 the siblings all came to the Triangle and began the plans for the new station. The brothers and sister-in-laws run day-to -day operations, In fact, even their kids come out and help at events where the company has a booth.

Because they live in the Highcroft neighborhood that borders the business, they wanted to involve their friends in finding a name for the new business. In Lebanon, Jihad’s family lived near the ocean, and thinking about a good symbol- the dolphin just fit. It is a friendly and smart animal, two qualities that the family liked. Oddly enough, many of the area organizations that the station supports are swim teams, notably the Highcroft and Carpenter Village neighborhood organizations.

Facing Up to Business Challenges

Amy mentioned that in the past few years their business has faced a couple challenges. After 9-11 she said times were a little tough. People mistook them for Muslim, with their Arabic names. They are Lebanese Christians, in fact Catholic. But many folks made ready assumptions from their names. She emphasized that the Town of Cary made sure to provide extra security so that they would not become victims of a misplaced hate crime.

During the aftermath of Hurricane Katrina, it was difficult to get gasoline deliveries. When they had gasoline, they contacted their neighbors to ensure they would know they had supplies.

A third challenge was the BP oil spill last year.  They maintained that their relationship with the oil company was great and they had excellent support from BP.

With the ups and downs of any economy as an entrepreneur it is important to always look for new opportunity. Jihad is always thinking of the next step in his business. Adding the Post Office helped to offset challenges brought about from the slow down in construction (where a good portion of his customers came from). Adding wine is a nice convenience for his neighbors who are miles from a grocery store. Likewise with the Domino’s Pizza.

We look forward to seeing Jihad’s next business idea.