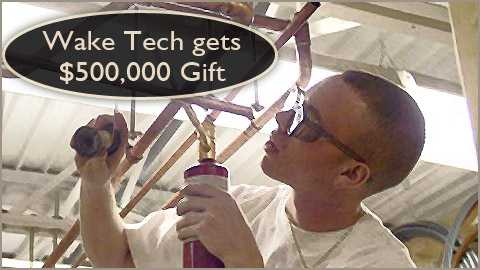 Cary, NC – The estate of the late Harold and Shirley Brenner of Cary contained something for Wake Tech – half a million dollars. It is Wake Tech’s largest gift ever.

The gift to Wake Tech is to fund scholarships for students in programs that take a year or less to complete – basic law enforcement, machining and welding are examples from the course catalog.

Starting jobs in the trades we examined were listed as $25,000-$40,000 per year. The State’s second largest Community College serves more than 60,000 students.

The $500,000 gift is from the estate of Harold and Shirley Brenner who lived in Cary. It will go into the Wake Tech Foundation to help provide scholarships and emergency funds.

Harold, who went by Hal, was born in Carlisle, PA in 1920. He served in WWII and spent his career at a division of Tyco Electronics, retiring in 1985 as an executive with the company. Hal Brenner passed away on July 20, 2010, about one month short of his 90th birthday.

Shirley Brenner was born January 12, 1914 in Pactolus, NC and passed away on July 23, 2004.  Pactolus is east of Greenville, up the Tar River from Washington and Pamlico Bay.

Shirley provided the connection to Wake Tech. Her niece, Mable Howell, was married to Bruce Howell, president of the college.

In a ceremony last week, Wake Tech unveiled a plaque honoring the Brenners as part of the Harold and Shirley Brenner Learning Commons in the Bruce I. Howell Library Education Building on Wake Tech’s Main Campus.