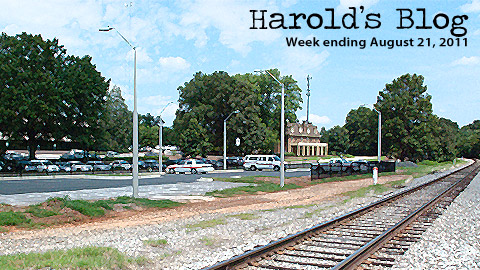 From the blog of Cary Mayor Harold Weinbrecht, covering the week through August 21, 2011. Harold’s Blog is edited for CaryCitizen by Matthew Young. Photo by Hal Goodtree.

Cary, NC – My week started with several meetings and ended with me taking both girls to college.

Monday morning I met with the Raleigh Board of Realtors in Cary to answer questions about my candidacy for mayor. I submitted a set of answers to their questionnaire prior to our meeting. Our meeting was cordial and there were a lot of good questions. I was enjoying answering the questions and talking until my time expired after thirty minutes. They plan to make an endorsement in a week or so. I have never been endorsed by the Raleigh Board of Realtors.

Monday night I joined the rest of the mayors in Wake County at Rex Hospital. The Mayors Association was invited to see and taste the changes in patient dining at Rex and the UNC Hospital system. We were served a three course dinner by their head chef Jim McGrody. What a fantastic meal. Since they have revolutionized their culinary system the patients have responded with a 90+% excellent rating. I was also presented an autographed copy of Chef McGrody’s book “What We Feed Our Patients”. It was interesting reading and I learned a great deal about why we think hospital food is so bad. It is clear that Chef McGrody is passionate about his work and it shows.

Tuesday I met with the town manager for about thirty minutes or so. He talked about new opportunities for our police department. I will be able to talk more about this at a later date. He also talked about a new sign regulation which passed the General Assembly that will take effect on October 1st. As of that date candidates will be allowed to put signs in the public right-of-way. I totally disagree. Not only is this dangerous but makes our town look trashy. I felt so strongly about it that I decided to email my fellow candidates and ask them to join me in not putting signs in the right-of-way. Here is my email:

Thanks to all of you for filing to serve on the Cary Town Council. Your willingness to serve the citizens of Cary is a very honorable thing. Your entrance into this campaign season is an indication of commitment to the community we all love to call home.

If we can agree then we not only protect our citizens from unwanted litter but keep them safe from distractions. Won’t you join me?

Thanks for your consideration.

Wednesday I met with several elected officials at our monthly CAMPO (Capital Area Metropolitan Planning Organization meeting). Cary had two items of particular interest in this meeting. The first was to approve a $75,000 increase in spending for the Morrisville Parkway extension and I-540 Interchange project. The second was to vote in favor of a letter from CAMPO about the upcoming federal funding recession.

Wednesday night was the last night our family will be together for a while so we all went out to dinner. The girls chose PF Chang’s mostly for the Great Wall of Chocolate dessert even though I ate most of it.

Thursday morning the family went to Greenville and moved my youngest daughter into college. She was very excited and very happy. I think I am still in shock. I remember looking into her eyes, when she opened them for the first time, like it was yesterday. Anyway, we said our goodbyes and came back to Cary.

That night I had a strategy meeting with campaign staff for about two hours.

Friday my wife, oldest daughter, and I were supposed to catch a flight to New York City to move her into graduate school. Our flight was cancelled due to weather and after several delays for the next flight we rebooked for the following morning and went home.

Friday night was the airing of the Cooper murder on Dateline NBC. While I was interviewed for the program I did not show up in the story which is fine with me. While I haven’t had the opportunity to watch the story, I heard that it was a fair job. Hopefully, I’ll get time to watch it in the near future.

If At First You Don’t Succeed, Fly Fly Again

Saturday morning we caught our flight to New York and arrived without any problems. We had a lovely day on Saturday in New York and moved my daughter into her room bright and early Sunday morning. My wife and I then caught a flight back Sunday afternoon just in front of the bad weather; so we thought. Our flight back had a couple of sudden drops which made a few people sick. I think we were all glad to be home when we touched down.

Emails this week included complaints about Cary Town Mall being dirty, problems with a sewer manhole in one of MacGregor Downs courts, drainage problems on Cedarpost Drive, erosion at the Searstone development, comments about developer fees for apartments, concerns about our decisions on the Austin Food site, and several invitations to various events.

Next week will be very busy for me with a council work session, a council meeting, a Western Wake Policy Advisory meeting, Lazy Daze, and a big fundraiser.

Well that is all for this week. My next post will be on Sunday, August 28th. Please feel free to email me with a comment. Email all Town of Cary questions or comments to Harold.Weinbrecht@townofcary.org. Email personal comments to augustanat@mindspring.com.