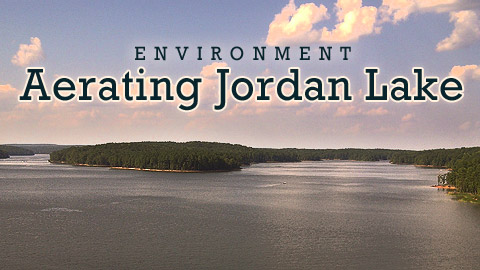 Cary, NC – By almost any measure, Cary is in an enviable position when it comes to water. Unliek many municipalities across the Triangle and around the country, we have a large, clean and dependable water supply in Jordan Lake.

Now, plans are afoot to study a new system to aerate parts of the lake and improve its overall health.

Call in the Corps

At a Cary Town Council work session last night, staff was directed to ask the US Army Corps of Engineers to study a proposed aeration system that could provide better water quality in part of Jordan Lake.

The proposed water quality enhancement project would include an aeration system to move oxygen-rich water from the surface of the lake to the oxygen-poor lower lake depths. The idea is to promote better oxygen circulation in the lake and an overall better water environment.

The new aeration system would float on the lake near the Cary/Apex Water Treatment Plant’s intakes near the US 64 bridge and Farrington Road.

“Providing better lake water through this innovative solution will reduce energy demands and chemical treatment requirements at our water treatment plant while improving the environment for Jordan Lake recreation enthusiasts as well as aquatic life in and around the water.”

This review process will likely start this fall and continue through 2012. If the project is approved, the aeration system could be installed in 2014.

The Town of Cary said the total budget for the project is $1.75 million, funded by utility capital revenue sources.

“Public input is very important to us,” said Brown, “and the Corps’ review will ensure that information is available for review and comment and that interested citizens and groups can be involved.”

CaryCitizen will let readers know when and how public discussion is to be scheduled.

My Kinda Tasty
Scroll to top