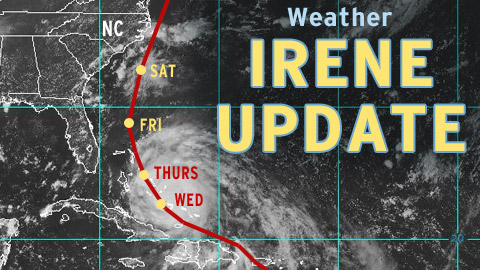 Cary, NC – In the latest computer models, Hurricane Irene, now a Category 3 storm, has tracked slightly to the east, lessening chances for a direct strike on North Carolina.

Irene has become a big storm, with winds topping 120 miles per hour. It is pummeling the southeastern Bahamas on Wednesday.

Hurricanes are unpredictable. As of Wednesday afternoon, the hurricane track had bent to the right.

This puts the Mid-Atlantic and Northeastern United States in the direct path of landfall.

Irene is expected to sweep past North Carolina starting on Saturday morning.

Emerald Island and points south are predicted to experience winds of 32-58 miles per hour. The Outer Banks could be in a zone with winds from 58-74 miles per hour.

If the hurricane tracks according to the most recent models, the eye of the storm could pass within a short distance from Cape Hatteras on its way north.

Forecast for Cary and the Triangle

Right now, the Triangle is predicted to escape the worst of Irene’s fury. According to the National Weather Service, Cary has a 60% chance of rain on Saturday.

More for the Southern-Latino Table: Chicken and Muscadines